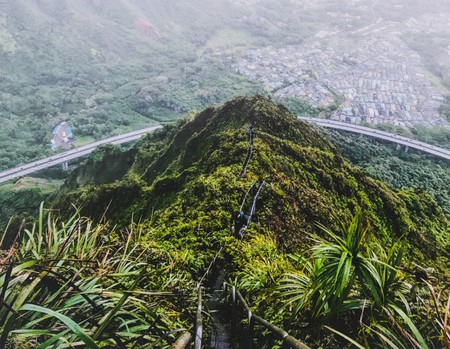 “At one point it’s just rope,” the locals will say, deterring or challenging those showing interest in facing Oahu’s famous “Stairway to Heaven”. This is probably for the best, though, as travelers need some serious mental resolve to take on this climb.

Like many other hikes in Hawaii, heading up before dawn is the norm. For this particular trek, however, adventurers will have to wake up much earlier. The site, located in the Kaneohe area of Oahu, is completely off-limits to the public. It’s illegal to climb and a trespassing fee could cost upwards of $500. The trick is to start the climb well before the guards start their shifts. This never used to be an issue when guard cars would routinely show up around 5am. Now, with so many people wanting to take in the view from the top, guards are posted up as early as 3am, making access just a bit tougher, but not impossible. 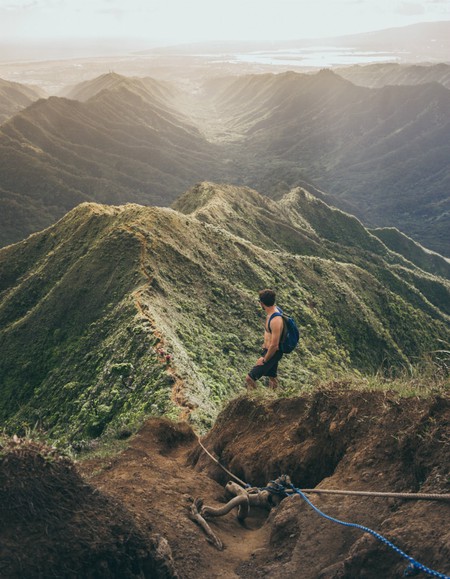 Nearing the top of Stairway to Heaven | © Daniel Keating / Unsplash

This hike is certainly not the most difficult trail in Hawaii, but people come from all over the world to climb it. The stairs were originally built for the U.S. military to be able to access the Ha’ikū radio station, which was placed up there during World War II. As the Ha’ikū Valley was a natural amplifier, it was the perfect palace to discreetly contact Navy ships traveling around the Pacific Ocean. Each step was originally made of wood and later replaced by metal for a sturdier climb. But, they haven’t been renovated since. Theres no up-keep and the stairs, many of them damaged from previous storms, and overgrown jungle, haven’t been fixed or replaced in many years. 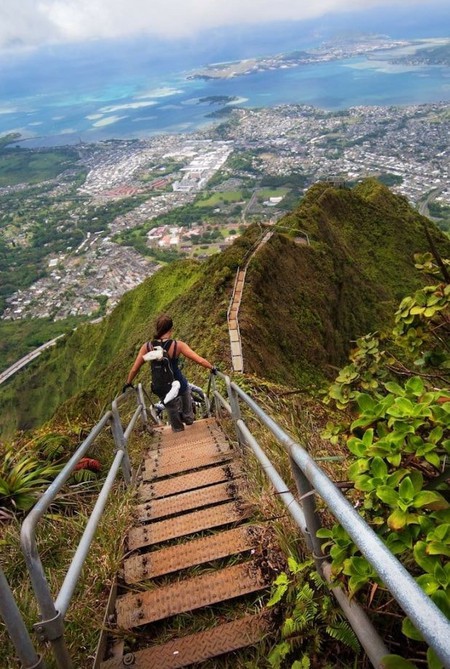 Those who have already done it will tell you that the hike is absolutely worth it, taking about five hours up and back. It’s perfect for catching the sunrise on a morning without clouds. Thrillseekers will have to climb over a marked fence in the dark and pass through a bamboo forest to find their way to the foot of the stairs.

From there, it’s almost completely a vertical climb, so those with fear of heights may want to give it a good think before deciding to attempt it. The stairs become so narrow at times, those heading upwards need to climb over the railing to let others pass by. It’s not a completely torturous climb, though. There are breaks between sets of stairs, allowing for photo ops and catching your breath. For those who dare it, every few steps of the narrow ridgeline offer their own spectacular view. 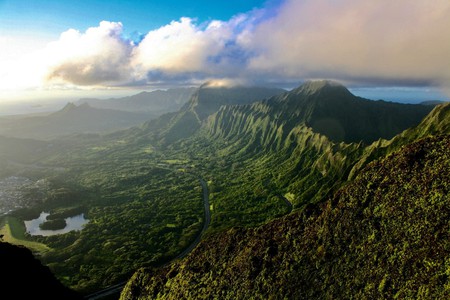 Understanding it’s popularity, The Friends of Haiku organization was created to collect money in order to revitalize the slowly deteriorating staircase.

Their goal is to repair and replace the faulty stairs in order to open them to the public, which is a mission easy to support. After all, they call it “Stairway to Heaven” for a reason. The view from the top is nothing less than breathtaking and should be available to everyone.