Icon of 20th century American art, Georgia O’Keeffe was in danger of running out of steam in both her personal and artistic lives at the close of the 1930s. Rescue came in the form a commercial commission from the Dole Pineapple Company and a chance to find peace and inspiration in the tropical paradise of Hawaii. The visit played a fundamental role in O’Keeffe’s development as a painter and creative mind. 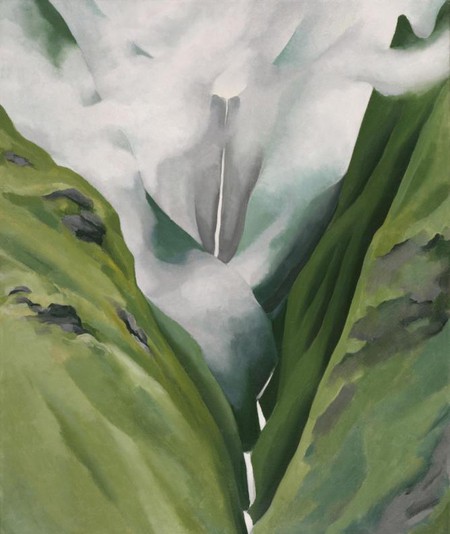 Best known for her large-scale, abstracted depictions of flowers and, later, her American Southwest subject matter, Georgia O’Keeffe is an art icon of the 20th century. Married to equally iconic photographer Alfred Stieglitz, O’Keeffe rose to fame in the 1920s. Often exhibiting her sensuous paintings at Stieglitz’s 291 Gallery, she quickly became a darling of the New York art scene, fetching high prices for her work and garnering critical praise.

O’Keeffe painted more conventionally Modernist forms such as New York buildings early in her career, but macro forms of irises and other flowers grew to become her signature style. Her bulbous, abstracted fields of colour blurred the lines of representation, like so many of her predominantly male contemporaries. She resisted the sexualised and feminist readings of her work, stating simply, “I have not been in Europe. I prefer to live in a room as bare as possible. I have been much photographed. I paint because color is a significant language to me.” She saw herself as a painter of colour and natural forms first, as a woman very much second.

However, after about a decade, the curvaceous flower paintings that had made her famous were growing tired as a subject, and the few paintings of new subjects – animal skulls and Southwest landscapes – were not well-received. She was accused in the press of churning out the flower paintings in an unimaginative ‘mass production’ style, and her New York critics were far from understanding the spell that her first trips to the Southwest had cast on her creativity. Simultaneously at a low point in her career and in her marriage, O’Keeffe and her critics were both ready for something new by the end of the 1930s.

A welcome distraction came in the form of a commission from the Hawaii Pineapple Company in early 1939 for two paintings to use in an upcoming print advertising campaign. As part of the commission, the company would also be funding a nearly three-month stay for O’Keeffe in Hawaii. This trip would prove to be not only personally restorative, but also instrumental in providing artistic renewal and direction.

Arriving in Hawaii, O’Keeffe was inspired by the pineapple fields, describing them as, ‘all sharp and silvery stretching for miles off to the beautiful irregular mountains…I was astonished – it was so beautiful.’ Her Hawaii landscapes feature deep, lush greens, bordered by ocean blues and jagged, black lava rock. Furthermore, the light, sunny yellows and pastel, rosy pinks of the tropical flora provide O’Keeffe with fresh vocabulary for her significant language of color.

These new forms gave O’Keeffe ample material to experiment with, and she deftly blended the novel influences with her established modes of expression. Brightly coloured heliconia stretch out against the backdrop of an infinite sea, fraternising with clouds that have been painted with as much care as the petals. Textures and hues are softer, but the forms are always dancing on the delicate line between abstraction and representation as nearly all O’Keeffe’s works do.

She wrote in her exhibition statement for the paintings, ‘If my painting is what I have to give back to the world for what the world gives to me, I may say that these paintings are what I have to give at present for what three months in Hawaii gave to me (…) What I have been able to put into form seems infinitesimal compared with the variety of experience.’ This variety of experience perhaps gave O’Keeffe a model and direction for transitioning her work after returning from Hawaii from the early paintings conceived in the studio of Lake George in upstate New York to the mature work completed at her new residence in New Mexico. 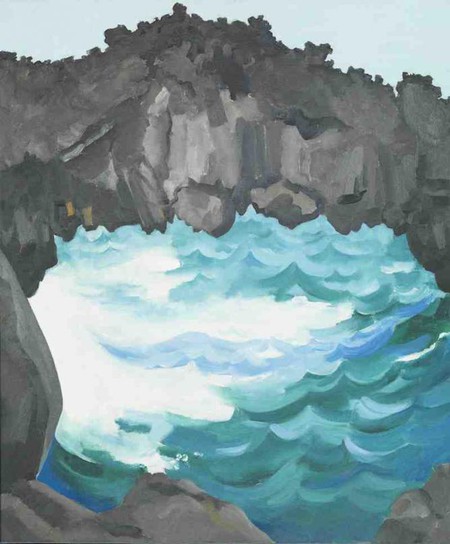 It is in the Hawaii paintings that O’Keeffe developed her visual language for depicting the relationship between the floral forms and the landscape. On these islands, she found the land and sea visually stimulating, and her canvases reflect her experiments to unite the two influences coherently. After permanently moving to the Southwest, O’Keeffe continued to develop the visual relationship between the micro and the macro through her representations of skulls and pelvis bones in the vast, empty desert. These later works would prove to be just as haunting, beautiful and enigmatic as the flower paintings of her prime.

The Hawaii exhibition was well-received by critics and provided O’Keeffe with a much-needed boost personally and professionally. Stieglitz remarked, ‘…her exhibition is on the walls and creating quite a stir. The irony of it all is that everybody feels that her work is better and healthier.’ Hawaii turned out to be a place of inspiration and renewal at a time in her life when O’Keeffe desperately needed both. Her relationship with Stieglitz did not improve, but the success of her commission and the very act of travel gave her the confidence to set out on her own, no longer in need of her husband’s marketing for the success of her work. O’Keeffe was free to have a room and a career entirely of her own.

Georgia O’Keeffe O’Keeffe returned to Hawaii in 1982, four years before her death in 1986. Although she did not paint, she did fulfil her wish to return to the islands since the 1939 voyage, demonstrating the impact those three small months had on her much longer career and life.

The Georgia O’Keeffe Museum in Santa Fe, New Mexico is dedicated to the life and legacy of O’Keeffe. Their collection includes over 3,000 pieces, including over 1,000 works by O’Keeffe.