Everyone's Breaking the Law By Sliding Down This Illegal Waterslide 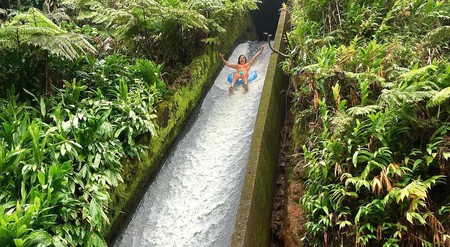 The best things in life are illegal – well, in Hawaii they are, apparently.

We all love being naughty sometimes. It’s a basic human condition – being rebellious and all. That’s why deep in the lush forest of the Waipio Valley in Hawaii, you’ll find locals and tourists crossing the White Road Hike to reach a giant 35-foot (11-metre) irrigation flume sat atop a concrete pool.

It’s basically a massive slide lodged deep in the bush, and in all honesty, we all want to go there now.

Just like that amazing waterfall in the Grand Canyon we uncovered a few months back, the hike to the slide isn’t as easy as you think. To reach the cascade, you must first conquer a two-hour walk in Hawaii’s vast and great wilderness. The trek involves leaping over rusty, jagged pipes, running through creepy tunnels, and bypassing top-secret (we think) US Government sites. Oh, and there’s some rope climbing involved too, so get those arms going.

Why is it such a task to get to? Well, because it’s actually illegal to use it as a slide. The whole path is designed specifically for irrigation purposes, so as you can imagine, it’s not really that safe for us humans to use. But does it stop us? Of course not!

The authorities are trying to crack down on the use of the slide, though. Hawaii News Now reports that folks are being told not to take a punt on the adventurous slide: ‘We need to discourage this as much as we can when people are saying things to appeal to visitors that may want to do a reckless type of experience,’ said Mufi Hannemann of Hawaii’s Lodging and Tourism Association.

Just beware, if you do decide to have a go on the slide, you will be liable for government fines if caught. #forthegram!

Take a look at the video below!

Fancy doing something that’s legal in Hawaii? Pay to see this magical sunset!