6 Roadside Finds to Buy From Local Vendors in Hawaii 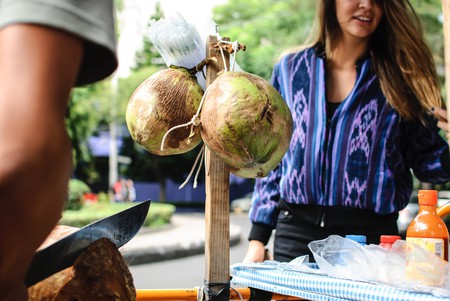 Drive down most major highways in the Aloha State and you’ll surely see a few stands or cars with items for sale.

Locals might be fundraising for their child’s sports team, saving for a big event, or just trying to make some extra cash. Whatever the motive, the local delicacies offered by roadside vendors can’t be beat. Here are just a few things you can buy.

There’s nothing like stopping on the side of the road to buy some lychee or an ice cold coconut after a hot day at the beach. In Hawaii, there are many permanent roadside fruit stands selling everything from mango, papaya, starfruit, and guava to cut pineapple. Keep a lookout for locals selling their backyard fruit from a car or pop-up tent since they’re often cheaper than the fruit stands.

This traditional Hawaiian dish is an island favorite. For big events, locals might spend the afternoon in a time consuming process carefully preparing the leaves and wrapping the little bundles of meat and fish. If the sudden craving for Hawaiian food hits, you might just be lucky enough to spot a lau lau seller on the side of the road.

The Hawaiian Islands radiate with unique natural beauty. The frequent tropical rainstorms nourish the fragrant flowers which grow wild and add color to front yards. In some areas, residents will leave cut flowers like ginger, heliconia, and bird of paradise outside their gate with a box to leave some money. It all works on the honor system, so show some Aloha Spirit. Protea grow especially well in the cold weather of Upcountry Maui and it’s very common to see the money boxes there.

Catch of the day

It’s well known that people in Hawaii eat much more seafood than the rest of the United States. Whether whole or already cleaned and cut into fillets, Hawaii’s fishermen are often seen selling their catch from coolers on the roadside. You can be certain the fish will be fresh and caught offshore in Hawaiian waters rather than imported or frozen like many varieties sold at the supermarket. Ahi (yellowfin tuna), aku (skipjack tuna), and ono (wahoo) are just a few of the fish frequently sold.

Although common around the world, Hawaii’s smoked meat and fish are so ono (delicious), that they’re hard to put down. The secret to the moist texture and unique flavor is to brine the meat with a special soy sauce mixture and dry in the sun before smoking. The thick chunks of smoked marlin and ahi are local favorites and make a great snack on the go.

It may seem odd to find Puerto Rican food in Hawaii, but the islands are a melting pot of cultures easily seen through its cuisine. Many migrant workers arrived from around the world to man Hawaii’s sugar plantations, including thousands from Puerto Rico. They brought with them the tradition of pasteles, similar to Latin American tamales but made with bananas and plantains rather than corn.