4 Hawaiian Legends About Maui and His Mythological Fishhook 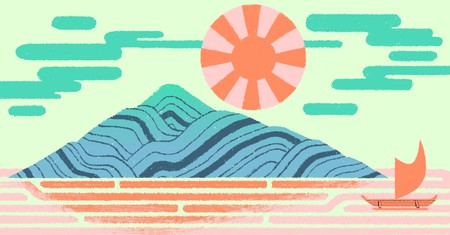 Long before the world knew of Disney’s Moana, the legends surrounding Maui were well-known throughout Hawaii and Polynesia.

The demi-god Maui is known as a childish trickster with an arrogant side—not quite the typical hero. However, the myths, mele (songs), and oli (chants) surrounding his incredible feats were passed down for generations, even pre-dating written language. Many tales surrounding this legendary character are still treasured by Hawaii’s keiki (children) and adults alike. Here are four prominent Hawaiian legends about Maui and his magical fishhook.

Maui fishes up the Hawaiian Islands

Maui’s four older brothers loved to go fishing and always caught enough to feed the entire village. Maui was always left behind, infamously bringing bad luck and only catching the tiniest of fish. Legend has it that one day, Maui couldn’t take it anymore—the demi-god pleaded with his brothers who finally took him along. This time Maui brought his magic fish hook, Manaiakalani equipped with a very special kind of bait—a feather from his mother Hina’s (the moon goddess’s) sacred birds the ʻalae.

After paddling the fishing canoe far out to sea, Maui and his brothers cast their lines and waited. Soon enough, Maui hooked something so big that he had to tell his brothers to keep paddling the canoe and not to look back lest he loose his catch. The intense struggle made one of his brothers curious, and when he turned around to see, the line snapped, but Maui had already pulled up eight verdant tropical islands from the ocean floor.

Maui discovers the secret of fire

During the course of history, Hawaiians reportedly forgot how to make fire. Maui grew weary of eating raw fish and vegetables, determined to find another source of nourishment. He noticed one day a plume of smoke off in the distance and set out to discover the remains of a large fire. After repeated attempts, Maui snuck up to the smoky pit to catch the culprit of this mess: an ʻalae (Hawaiian moorhen). He grabbed the bird by its long neck and demanded to know how they created the fire. In an effort to keep the fire-making ability a secret, the ʻalae told Maui to rub two pieces of the maiʻa (banana tree) together. When this didn’t work, Maui squeezed the bird’s throat until he unwillingly spilled the secret—use two pieces of dried kiawe.

As his own personalized punishment, Maui created a large fire as instructed, but left a mark on the ʻalae’s forehead. This legend explains why the particular birds have brightly-colored red bills, and its chicks being born with a bald red head which looks like it was scalded.

Maui takes on the sun

Each day, legends describe that gods and mortals alike complained of losing time. With so much to do, and not enough hours in the day, Hina, Maui’s mother, wasn’t even able to dry her kapa (cloth) as the sun zoomed across the sky. Maui was fed up with the antics of the sun and its setting ways. To combat this, he wove a long lasso out of coconut fibers as he made his way to the highest point on the island, Haleakalā—House of the Sun in Hawaiian. Everyone laughed at his crazy idea, but Maui set his trap in darkness and waited. As soon as he saw the sun, he snared one of the rays and a raging battle ensued, filled with threats and pleading. Finally, the sun could take no more and promised Maui he would slow down and give the people and gods more hours of sunlight.

According to legend, Maui lived in a time of darkness. This was a time when the sky pressed down close to the Earth, flattening the leaves of even the tallest trees. Maui embarked on a search for a kahuna (priest/shaman) to guide him, and was given a magical tattoo and water from a special gourd for strength. With his supernatural strength, Maui was able to lift the sky onto his shoulders and run to the highest peak. At the top of Haleakalā, the demi-god threw the sky up into the air where it sits today. Every once in awhile, a dark storm cloud or misty skyfall will try to creep its way down the mountainside. But it never takes—in case Maui returns, all fear being thrown out.