Will Rackley's Transition from NFL Lineman to Portrait Artist

Will Rackley grew up with two loves: football and art.

He fulfilled his dream of playing in the National Football League, but was forced to retire prematurely after suffering three concussions in nine months.

Now Rackley, 27, is living out his second love as an Atlanta-based artist.

“I was always into painting and always wanted to try it and never did,” Rackley said. “I just tried it one day and it stuck. I’ve been doing it for about two years now.” 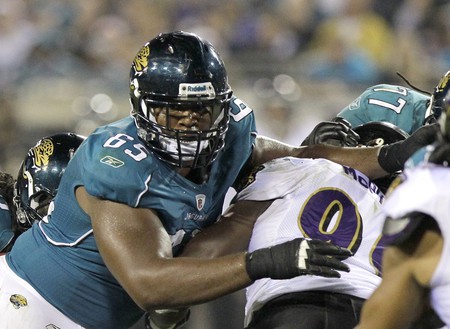 The former offensive lineman for the Jacksonville Jaguars and Baltimore Ravens started Div1sion Won Art in order to field commission requests and showcase his self-taught talent. Rackley, who favors art from the Renaissance as opposed to more modern styles, specializes in portraits.

His first foray into painting was an abstract piece on a six-foot canvas he still has hanging in his house. Rackley, who prefers acrylic over oil painting, said he’ll work on pieces for four to six hours each day and can usually finish a work in three to five days, depending on how large and detailed it is.

While he’s got his routine down pat, he’s still always learning and trying to improve.

“I don’t like doing hands,” he said. “It’s something I need to work on. If I can avoid them I would. I don’t know what it is … maybe it’s the fingers?”

Even though the majority of his works are commissioned pieces of anything from Bob Marley to Iron Man, or a pair of toy Australian shepherds, Rackley still has time to paint one of his favorite subjects: his wife, Briana.

In fact, Rackley painted a 30×40 abstract portrait of the newlyweds that hung at their wedding.

“I haven’t had a lot of time to do stuff for myself; I’m usually doing commissioned work, which I guess is a good thing,” Rackley said. “When I do have time I try to do little things for myself.”