The 10 Best Places For Burgers In Atlanta, Georgia

The capital of Georgia has its fair share of both great fine-dining restaurants and home-style comfort food. Somewhere in-between those two ends of the spectrum lies the new hamburger. Americans are getting tired of low-quality burgers, and are looking for something better. In Atlanta, they have found it. We look at 10 Atlanta burgers that are making customers forget about their sub-par, fast-food counterparts, and establishing the burger as a gourmet food to be desired. 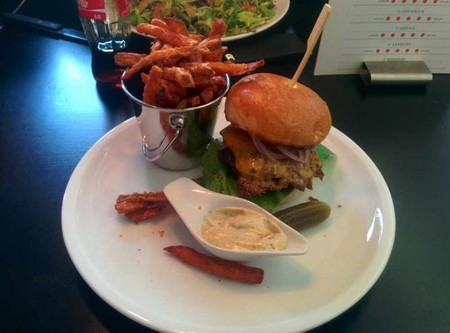 The folks at Grindhouse Killer Burgers are doing something magical. They have a small menu that centers around burgers, with a small selection of sides and appetizers. But the tender juiciness and punch of flavor in each of their burgers is something to write home about. The Apache-style Killer burger has been widely heralded as the best on the menu. The 1/4-pound beef patty is topped with pepper jack cheese, grilled onions, green chiles from New Mexico and lettuce. The Apache truly lives up to its name as a killer burger. And thought the crinkle-cut french fries are great, try a side of sweet potato chips or fried green tomatoes for a taste of the South.

This burger has a simple name, but the flavor is a complex combination that is simply delicious. The General Muir is located in the Emory Point neighborhood, and is heavily inspired by Jewish deli fare. For The Burger, they stack gruyère, caramelized onions and pastrami on top of the burger. Then, the tower is topped with Russian dressing and sweet-and-sour pickles. The result is a surprising complexity of flavors that is equal parts warm indulgence and bright, flavorful zippiness. The General Muir is no boring deli serving up the same soup and sandwiches, but rather worth every effort to pay a visit for their ingenious take on this American classic.

Judging from the name of the restaurant, this place seems to think it is something special. And with its humanely raised, grass-fed beef and locally-sourced ingredients, it just might be. With an eye on changing the way that Americans see burgers and overthrowing the conventions of fast food chains, YEAH! offers a product that is fresh and customizable. The basic YEAH! Burger is so good, it lives up to its exciting name. The burger has two patties, lettuce, pickles, caramelized onions and YEAH! sauce, an unknown mixture of pure deliciousness. All of that is then sandwiched inside a locally-produced, artisan bun. This is definitely something to get to get excited about. 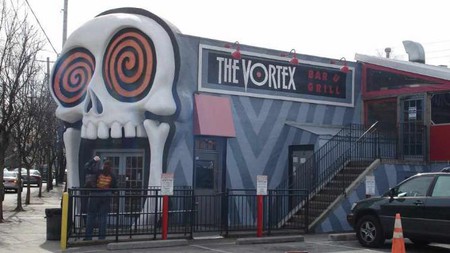 The Vortex has become a cornerstone of Atlanta’s Little Five Points neighborhood. The burger joint is well-known for giving its patrons a great experience. The restaurant now has two locations, has been rocking for 20 years and is consistently a local favorite. Burgers abound on the menu at The Vortex, with several having become legends, but The Coronary Bypass remains as one of the best anywhere. A half-pound sirloin patty is topped with three slices of cheese, a fried egg and four slices of bacon. You may want to get your heart checked after this one.

Evan Mah at Atlanta Magazine recently said, ‘Robert Phalen probably wishes that people would stop talking about his burger.’ But it is so good that we have to get in on the action too. One Eared Stag has created a burger that is truly unlike any other. The restaurant actually grinds bacon in with its beef, to form a patty that is unbelievably moist and flavorful. The distinct, salty flavor the the bacon is expertly paired with cheese, pickles and finely-shaven white onions. This burger used to be an off-the-menu, hushed secret and thus garnered wild rumors and whispering. But we’re glad it’s now out of hiding, and available to anyone looking for an unparallelled food experience.

Bocado’s burger is minimalism at its best. The burger has been pit against countless newbies to the Atlanta burger scene, but it stands stalwart. The Stack is simply two juicy patties, American cheese, house-made pickles and a made-from-scratch bun. The beef for the patties is ground in-house, ensuring that they never even come close to being pre-packaged or frozen. This burger is melt-in-your-mouth goodness, without any frills. Bocado offers The Stack on both their lunch and dinner menu, so if you’re feeling tempted to swing by a fast food joint that shall not be named, resist the urge and head straight for western Midtown. 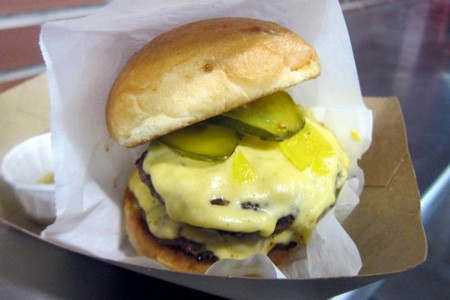 This burger is so good, it needs no fancy name or introduction. At Holeman & Finch Public House, the simple burger once again has become something magical. The ground beef is a mixture of brisket and flank, and is griddle-cooked to the perfect temperature. The patties are covered with American cheese slices, sliced red onion and homemade bread-and-butter pickles. Holeman & Finch makes its own ketchup and mustard in-house, which perfectly round out the flavors of the burger, underneath the crown of its brioche bun. Once you try it, there can be no question as to why The Burger has attracted national attention.

Farm Burger is a refreshing change of pace from the mass-produced, over-consumed burger that the US is so famous for. The restaurant aims to turn eating back into a venture that is mindful and ethical. Cows are humanely treated, and harmful chemicals and hormones are left out of the process altogether. The Farm Burger is the very first option on the menu, and is everything that a burger should be. The beef is freshly ground, cooked to perfection and accompanied by aged white cheddar, sauteed onions and a special house-made sauce. For customers looking for something a little more creative, a number of ingredients and toppings can be added to make your burger truly unique.

The Ghetto Burger is a behemoth mountain off food that has won the attention of patrons across the country. Ann’s Snack Bar is a simple restaurant, old-fashioned restaurant where the food is prepared with passion and care, and it shows in every dish. The Ghetto burger is composed of a toasted bun, two patties, cheese, bacon, grilled onions, ketchup, mustard and warm chili. The result is a meal that will stick to your ribs and make you reconsider what it is you call a hamburger. Unfortunately, the owner, Miss Ann, passed away in April of 2015. Her family is planning to keep the snack bar open, but it may be a good idea to pay a visit to the restaurant soon to enjoy the Ghetto burger before it is too late.

With a goal of making everything they possibly can from scratch and by hand, the family behind Scratch Fresh is creating a product that is a far cry from most of the burgers that Americans are used to today. For their burger, the team layers high quality ingredients together to form the perfect meal. The Scratch Burger has two patties, and comes sans toppings, unless you tell them otherwise. There are over 10 options of vegetables and condiments to make your burger experience truly unique, and the house-made Burger Sauce is an absolute must-try.