Tobavarchkhili | @ Tai Dundua
Georgia occupies the southern slopes of The Great Caucasus 1100 km long mountain range. A small country, covering 69,700 square kilometers, it is a paradise for hikers, trekkers, campers and anyone who loves lush nature and breathtaking landscapes. No matter if you are a beginner or a professional, if you want to get lost in the wild or would love to hike up the medieval villages, Georgia has it all.

The trail connects the Juta village of Kazbegi with Khevsureti, one of the medieval regions of Georgia. The trail is quite exciting due to the vicinity of the impressive Chaukhi Massif with its seven distinctive peaks. One of the main reasons people hike this trail is to visit the communities of Arkhoti, where you are greeted with breathtaking gorges, beautiful waterfalls, and complete solitude.

First, you need to get to Bariskaho village in Kvesureti from Tbilisi and then to the village of Roshka to start a hike towards the picturesque lakes. It is about seven km walk to the first two lakes and another half an hour trek to reach the last one. There are three different color lakes – blue, green and white. You can camp at Green Lake for a night but the trek is completely doable in a day. Relax and enjoy the beauty.

Located in the Lagodekhi National Park, this trek is quite hard for those who are not used to walking steep mountain slopes. However, it is worth the effort for the splendid surrounding nature. Lagodekhi is the oldest nature reserve in the country offering several hiking trails to its visitors, Black Rock Lake being one of them. You’ll pass through a beautiful forest, and if you are lucky enough, you can even spot local fauna – deer, chamois or mountain goats. The lake is about 3,000 meters above sea level and takes you to alpine zone of the country with even more breathtaking views over the highlands of Georgia. A circuit trail and another shelter three km away from the lake opened in 2016.

Borjomi-Kharagauli National Park is one of the biggest parks in Georgia, famous for its pristine forest and broad range of wildlife. The park has nine marked trails, with St. Andrew’s path being one of the best. The trail offers gorgeous views and the possibility to climb the highest mountain in the park – Sametskhvario. You can stay at tourist shelters for a small fee. So you don’t need to carry a tent with you on most occasions.

The name Tobavarchkhili, is Megrelian (another Georgian language spoken in Samegrelo Region) and translates as ‘Silver lakes’ in English. The lakes lie at the heart of Egrisi mountains, separating Svaneti from lowlands. This trail is considered to be one of the hardest hikes in Georgia. You need to walk for at least three days to reach the lakes, but the surrounding beauty is worth a hike. It’s one of the most dangerous hikes as well, so it’s best to have a guide.

If you are more keen on hiking through more civilized areas of the country, try trekking from Mestia, the center of Svaneti to the most remote village Ushguli. The trail offers natural and historical sights with a relatively short hike. Additionally, you’ll be able to spend a night at one of the village houses.

Omalo is the central town of Tusheti region, which borders Kvesureti. Therefore, it’s easier to hike from Omalo to Shatili or vice versa. Both towns offer medieval architecture and centuries-old traditions. The trail from Omalo follows along several charming villages of Tusheti, where population reduces as you walk towards Khevsureti region.

The first part of the trail, you’ll be in an inhabited valley, then starts the wildness where you might meet shepherds, like-minded trekkers, and border guides. Moreover, you’ll travel the 3,413-meter high Atsunta pass. 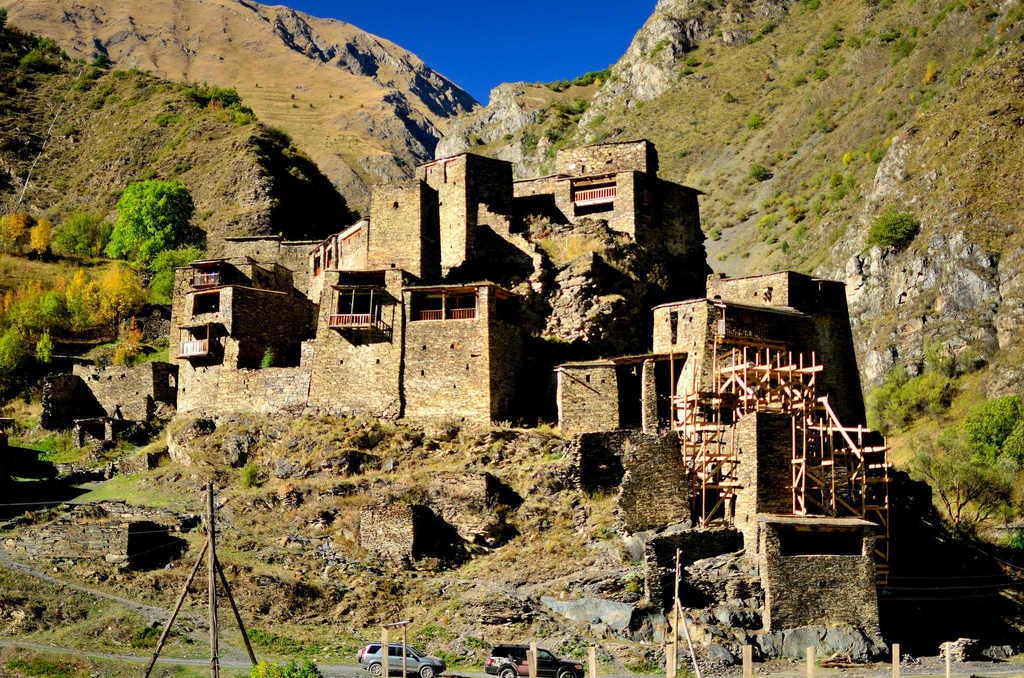 The trail starts at magnificent Truso Valley and takes you to Keli volcanic elevation – a dry, rocky piece of land resting west of Georgian Military Highway. The hike towards the Kelitsadi lake, similar to Tobavarchkhili, is quite hard and requires at least three days walking to get to the lake.