The Ocmulgee National Monument is a national park that has preserved over ten thousand years of Native American culture. With burial and ceremonial mounds, the Great Temple, and war trenches still visible along the hills of the Macon Plateau, this historic site is living proof of the many generations that have passed through present-day Macon, Georgia. From the 17,000 BCE ‘Clovis’ spear points to the 18th-century Fort Hawkins, discover the rich history behind Ocmulgee National Monument, and how to make the most of your visit.

Ocmulgee National Monument has a longstanding history: from the Paleo-Indians of the Ice Age to 18th-century Creek Natives, this land has played host to generations of Southeastern Native American life.

The discovery of the ‘Clovis’ spear points used by Ice Age hunters marks the beginning of the Ocmulgee region’s history. The Paleo-Indians were suspected to have occupied most of North America, especially the Southeast region of the US, at this time; with the Ice Age period coming to an end, they were forced to adapt.

During excavation, a range of tools, including knives, drills and hammer stones, well-preserved bone points, fish hooks, canoes, and pieces of clothing and woven bags, and ‘base’ camps with storage pits, floors of houses, and prepared burial sites provide substantial evidence of the new era of hunters and gatherers. Trade networks using ‘specialized resources’ are suspected to have been the basis for survival during this period.

The period of the Woodland culture is distinguished by elaborate pottery, the cultivation of plants, and burial and platform mounds. 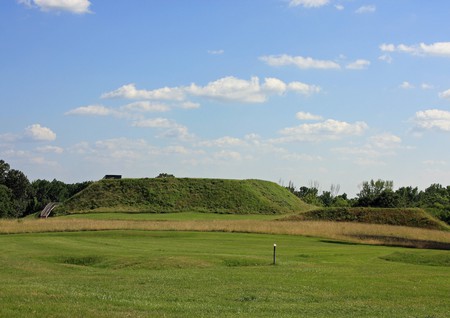 Known today as the Lamar Mounds and Village Unit, the ceremonial center, burial mounds, and Great Temple – built by the Mississippians (people from the Mississippi area) – are evidence of the changing native culture in this region.

In 1539, Spanish settler Hernando de Soto brought disease from Europe, killing about three-quarters of the Mississippian population. In 1690, the British built a trading post on Ochese Creek, and many of the Creek Nation natives moved to this area where they purchased guns and traded goods, changing their way of life forever. In 1715, many English traders were killed during the Yamassee War, and the British retaliated by burning the native town on Ochese Creek, forcing them to move to the Chattahoochee River.

In 1805, a treaty between the US and the Creek Nations allows the US to construct Fort Hawkins, a military fort, and a ‘federal road’ across the Creek Nation; by 1826, the last of the Creek lands in Georgia are given to the US, and the natives are forced to resettle in ‘Indian Territory’ in present-day Oklahoma. From 1836-1837, over 14,000 Creeks traveled a three-month-long trip – 1,200 miles long – to reach the Territory, most bringing only what they could carry. 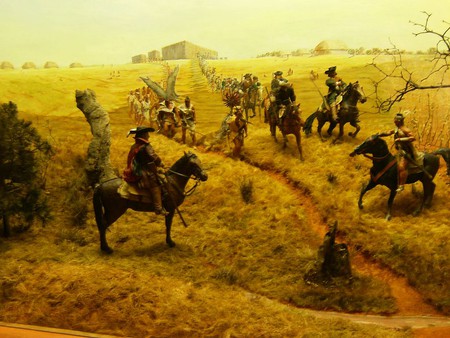 At Ocmulgee National Monument, there’s plenty to keep you busy. Head to the earth lodge, and see the original floor dated to 1015; visit the seven different mounds; or, check out over 2,000 artifacts dated 10,000 BCE to the 1800s at the museum. You can also go fishing in the river; ride bikes along the Heritage Trail; have a picnic; or, bird-watch and discover the natural wildlife of the area.

For those who want to experience all the park has to offer by foot, there are plenty of hiking trails that lead to the various archaeological sites: the Dunlap Trail leads to the Dunlap Mound and Civil War earthworks; the McDougal Trail leads to the McDougal Mound and fort; the Bartram Trail winds next to the railroad bridge, built in 1874; the Corn Field Mound Trail leads past the Corn Field Mound, a ceremonial cornfield into the prehistoric trenches; and, the visitor center to the Great Temple Mound Trail leads to the Earth Lodge, the Trading Post site, and the Greater and Lesser Temple Mounds. Other trails include the Southeast Mound Trail and Funeral Mound Trail, which start at the Trading Post and lead to their respective mounds.

The park does not have overnight facilities, but visitors can camp at Lake Tobesofkee in Macon, or opt for a hotel in town. Be sure to check the events calendar before planning a trip. 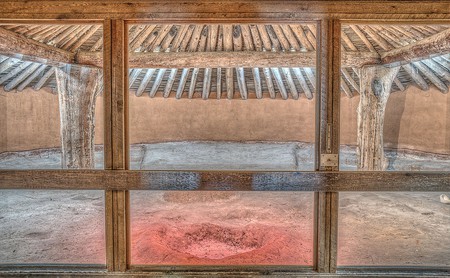 Interior of Earth Lodge | © Dsdugan/Wikicommons
Give us feedback