The Top Flavor Sensations You Have to Try in Miami 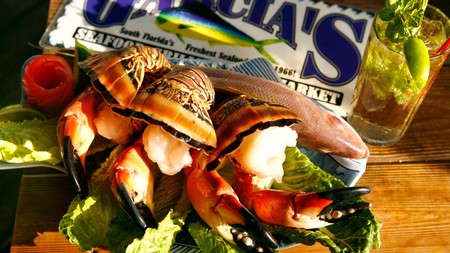 If you’re the kind of traveler who can’t see a bowl of ice cream without whipping out your smartphone, you’ll be in seventh heaven in made-for-Instagram Miami. Of course, there’s the pastel-pretty Art Deco architecture of South Beach, which looks good enough to eat. But we’re talking about stuff that’s literally good enough to eat. Miami is a multicultural feast of flavors, from Little Havana to Little Haiti – these are the 14 tasty treats you must try in Miami.

In Miami, prepare yourself for Latin American and Caribbean-influenced foods by the plateload. The chicharrón is a staple of South American cuisine. Fried pork is all it is – pork belly or pork rinds. But don’t be fooled into thinking that every chicharrón was created equal. If you want the best, you’ll need to make your way to El Palacio de los Jugos. This family affair, which has been in business since 1977, follows favorite Cuban recipes, with three locations in Miami. 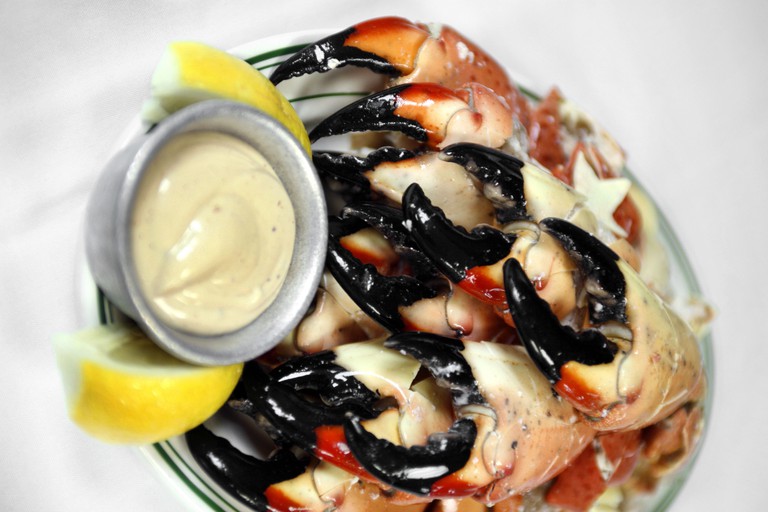 © Martin Thomas Photography / Alamy Stock Photo
Here’s a seasonal dish that’s served from October to March in seafood restaurants the length and breadth of Florida. The stone crab yields what might be the most tender and succulent meat of any of its sibling crustaceans. Served cracked and chilled on ice, Florida stone crab claws can vary in size, and the sweet, lobster-esque flesh needs barely any seasoning. The best place to go for these marvelous gifts from the ocean is the famousJoe’s Stone Crab – a bustling, wildly popular institution where the thing to do is to finish with a slice of key lime pie (read on for more about that).
Open In Google Maps
11 Washington Avenue, South Beach, Miami Beach, Florida, 33139, USA
+13056730365
Give us feedback

Market, Restaurant, Seafood, $$$
Facebook
Email
Twitter
Pinterest
Copy link
Share
Map View
In Miami – how could it be otherwise this close to the Atlantic? – fish-eaters are spoiled for choice, both in terms of quantity and variety. No wonder Miami New Times has a “best seafood sandwich” category as part of its Best of Miami Awards. One place we’ll return to again and again is Garcia’s Seafood Grille & Fish Market – its mahi-mahi sandwiches are the best thing since sliced bread. And whether grilled, blackened or fried, nothing beats a freshly cooked grouper filet wedged between two freshly baked buns.
Open In Google Maps
398 Northwest North River Drive, Downtown Miami, Miami, Florida, 33128, USA
+13053750765
Visit Website
Give us feedback

Bar, Cafe, Venezuelan, American, Vegetarian, Gluten-free
Facebook
Email
Twitter
Pinterest
Copy link
Share
Map View
Here’s a Latin American edible institution that has made itself nicely at home in Miami. The arepa – a carb-heavy cake incorporating pounded corn – is such a versatile thing. It can be eaten on its own or stuffed with meats, cheeses and vegetables for a super-hearty meal. If you want to eat yours like they do in Miami, then need to order yours stuffed with pulled pork, melted cheese and avocado. And we know just the place to head to for it: Venezuelan comfort-food joint La Latina, in Midtown, widely considered the best restaurant in Miami for these moreish little wonders.
Open In Google Maps
3509 Northeast 2nd Avenue, Edgewater, Miami, Florida, 33137, USA
+13055719655
Visit Website
Give us feedback

As it has around the world, ceviche has belted its way up the culinary charts in Miami. These days, Floridians expect the tangy, juicy marinated dish to appear on the menu practically wherever they go. It’s an irresistible creation: fresh raw fish cured in citrus juices, such as lemon or lime, and spiced with chili peppers. For the figure-conscious as much as for folks who wilt in the heat, ceviche is as refreshing as sorbet – and that’s why it’s at home in this city. If you can afford the blowout, try it as prepared by Peruvian super chef Gastón Acurio at his eponymous hotel restaurant within the Mandarin Oriental Miami. Sensational. 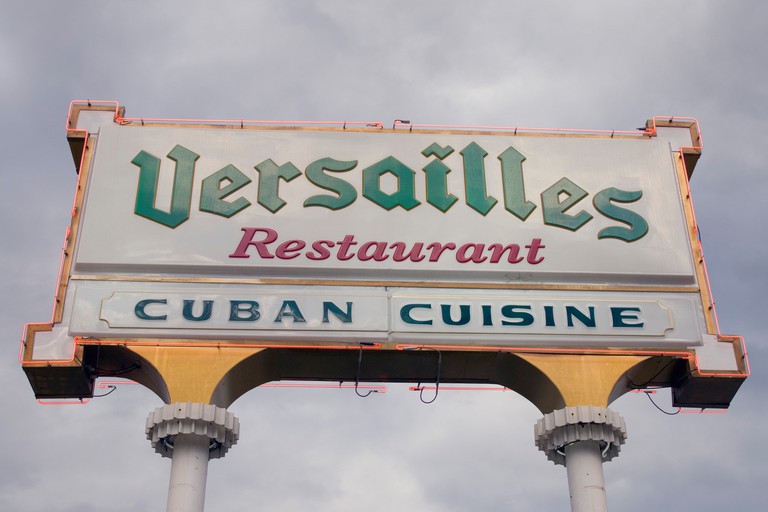 This is probably the most authentic Miami dish of them all. The Cuban sandwich is a variation of a ham and cheese sandwich that originated in cafés catering to Cuban migrant workers in Key West during the late 19th and early 20th centuries. Made with fresh Cuban bread, yellow mustard, roasted pork, baked ham, Swiss cheese and sliced dill pickles, the Versailles Restaurant is famous for its version of this classic Miami dish. Day or night, this Calle Ocho institution in Little Havana buzzes with life, as regulars chomp and chat and watch the big TV screen for news (in Spanish) of the homeland.

We’ve tried Colombian, fallen for Peruvian and can’t get enough of Cuban. But we can’t get away with not bringing up Argentinian – these people offer a veritable master-class in grilled steak and chimichurri sauce. Purists will know churrasco to mean a barbecue with many different cuts of meat. Sure enough, Latino-loving Miami is awash with churrascarias: steakhouses where the waiters walk around bringing the clients their favorite carnivorous cuts in all shapes and sizes.Puerto Madero is our recommendation for an authentic, juicy treat.

Attention all you sweet tooths out there. If you’re coming to Miami, do not leave without trying at least one heavenly slice of key lime pie. The dessert is Miami in a mouthful – in fact, it’s the flavor of Florida. We suggest you stop by the Icebox Cafe in Miami Beach, where they will happily serve up a nine-inch-deep key lime pie. The perfect specimen (for anyone who doesn’t know) is supposed to be sweet, tart, crunchy and creamy. At the Icebox Cafe, they know the drill – yours will be infused with fresh key lime juice and topped off with whipped cream.

Even if you’ve only called into San Juan on a cruise ship, you’ll have tried mofongo – it’s a ubiquitous snack in Puerto Rico, composed of fried plantains, garlic and chicharrón all swirled into one and a dream eaten with chicken or pork. Brought to Puerto Rico by slaves from Western and Central Africa, it is as uplifting to taste as its backstory is tragic to hear. In Miami, head for Little Havana’s Calle Ocho, and pop into La Placita.

This dish owes its Miami popularity to the vibrant Haitian community centered in Little Haiti. We could have gone with a number of delicious Haitian-inspired restaurants, but we chose to keep it classy by featuring the neighborhood’s Chef Creole, an award-winning local hotspot that serves some of the best fish you’ll ever eat. Jay-Z and the late, great Anthony Bourdain are among those to have rocked up and tucked in here. Make sure you get in early (it sells out fast), order the fried fish and lather on a whole lot of pikliz, the Haitian pickled vegetable relish.

Step into a Publix or produce market in Miami and you’ll find a cornucopia of foods from Central and South America, including yuca. This South American root, sometimes called cassava, may be poisonous when consumed raw, but it’s mighty delicious (and safe) when peeled, pressed and cooked. Yuca is a versatile veggie, not unlike a potato, and can be prepared nearly every way imaginable. You’ll find it boiled, fried, mashed and made into chips throughout Miami, and El Palacio de los Jugos will serve it up .

How does a heaping pile of “old clothes” sound for dinner? We’ve got a laundry list of reasons why you should try ropa vieja. Not only does it have the distinctive pleasure of being a national dish of Cuba, it’s also a popular menu item in Miami. Shredded or pulled beef is stewed alongside onions, peppers, garlic and tomatoes. The colorful result is a stringy and savory dish resembling, you guessed it, a pile of old clothes. Put on your best guayabera and order a plate of ropa vieja from Habana Vieja Restaurant.

Croquettes, or croquetas in Spanish, are small cylindrical tubes, fried and filled with savory sauce, meats, potatoes or cheese. The beauty of them is that, though they’re far from uncommon in Miami, you’ll find plenty of variation on each menu. The most popular version in South Florida are the Spanish-style croquetas, made with Spanish cured ham and deep fried in breadcrumbs. Sanguich has a plate of ham croquetas to munch on, but if your appetite needs more than an appetizer, their croqueta preparada slaps two croquettes, ham, lechón, cheese, mustard and pickles between two slices of fresh Cuban bread. 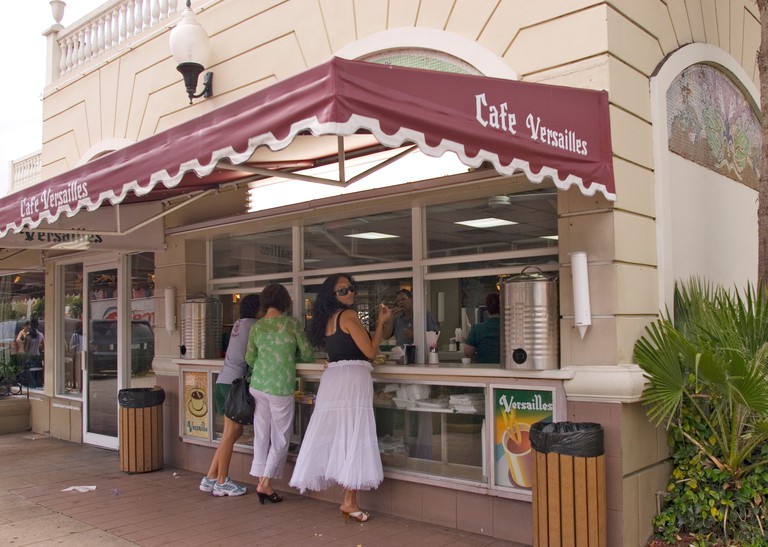 Ordering coffee from Starbucks in Miami is like going to NYC and ordering pizza from Domino’s. When you’re craving a pick-me-up, a café con leche from a Cuban coffee shop is absolutely necessary. A hot cup of freshly roasted coffee mixed with equal parts scalded milk will have you awake, alert and amazed, asking yourself why you’d ever settle for anything less. Take a ride over to Versailles in Little Havana and fuel up with a café con leche, made the right way.

With the swamps of the Everglades right next door, you can’t possibly make a stop in Miami without chowing down on some alligator bites. Florida’s longtime local has its own hunting season, and restaurants throughout South Florida feature this scaly side dish. Also called gator nuggets, alligator bites are usually tail meat, breaded and fried, and pair perfectly with a Sunshine State beer. Get a little wild and dip a few alligator bites into spicy mayo at Kush.