The 12 Weirdest Things You'll Find at the Carmine Oddities Boutique in Orlando, Florida 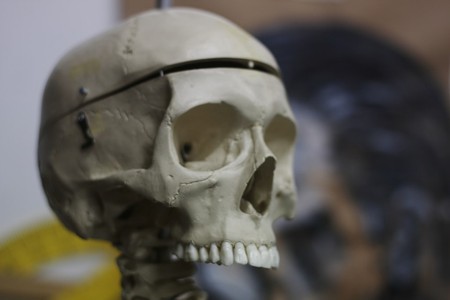 Carmine Oddities Boutique of Orlando, Florida, offers an unusual, eclectic, and sometimes frightening inventory that aims to appeal to those with particularly special tastes. Located in the northern area of “The City Beautiful,” it’s open every day and also has a smoke shop and coffee shop on site. To give you an idea of what you’ll find in this strange little place, here we touch on the 12 weirdest things you’ll find at the Carmine Oddities Boutique in Orlando, Florida.

These are not rubber, or clay, or foam… REAL SKIN!

You’ll find a wide assortment of authentic shrunken heads at Carmine Oddities Boutique. The curio shop gets regular shipments of them from time to time, so there are always some fresh faces to see.

Something new in today… (drool!)

Some of the weirdest things you’ll see at Carmine Oddities Boutique are the old books, pamphlets, and manuscripts on alchemy, religion, magic, and other occult subjects. Even if you’re not into the subject matter, many of them feature fantastical artwork and typography that can be appreciated by all.

Carmine Oddities Boutique regularly plays host to a wide variety of acts, including clowns, mimes, magic shows, and fire-eaters, and one of these live performances in the small, intimate space is sure to be one of the strangest things you’ll see for some time. Tarot readings, sessions with psychics, and seances have also been held at the curiosity shop.

You’ll find loads of old medical equipment in this shop, such as a selection of glass eyes, lobotomy tools, bloodletting blades, and an antique polio leg brace. Some old pieces of medical equipment have been re-purposed and used in art sculptures.

You’ll see a large selection of animal skulls at Carmine Oddities Boutique, ranging from small feline faces to those of a large alligator. There are also some incomplete and complete skeletons of a few animals, such as a horned cow skull still attached to its spine, as well as a large selection of unattached bones.

Who's got two heads and is ready to party?

There are several pieces of taxidermy art that feature animals with two heads, many of which are then dressed in human clothing. There are even “two-headed mummies” at Carmine Oddities Boutique.

We've got all sorts of specimen this Sunday! Come check us out! #keeporlandoodd #oddlando

Bugs, snakes, lizards, and other long-dead specimens can be found in various states of preservation throughout Carmine Oddities Boutique. Some of animals are preserved whole and intact, while others are dissected or have had the skin removed.

Carmine Oddities Boutique is home to several statues of devils and demons made of wood, stone, and other material. Some of these figures are lewder than others, but all exude a certain bit of mischief you can’t ignore.

The taxidermied goat repurposed into a rocking chair is one of the weirdest things you’ll find in Carmine Oddities Boutique. Customers are welcome to sit on the stuffed goat-rocker for a picture, but they must be careful of the large, pointy horns.

Ah the good old days when a kid could play with fire and a steam engine…. #makesteamgreatagain #oddtoys #steampunk #steamtoys #oddities #carmineboutique

This beautiful lady is now the curator of Carmine Boutique's Special Collections Library. Come in and visit us!

There are several human skulls and even a few whole human skeletons at Carmine Oddities Boutique. Some are artfully placed in display cases, but don’t be surprised if you see human bones lying around throughout the shop.