The 13 Best Cuban Restaurants in Miami 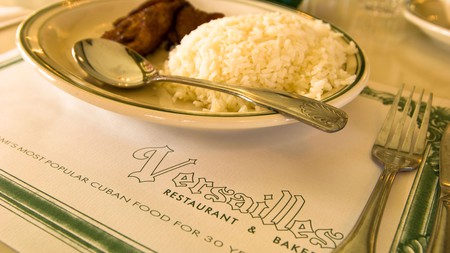 Miami’s Cuban food is a rich marriage of traditional recipes and American techniques and ingredients. The resulting restaurants achieve distinctiveness while honoring a common thread of flavors and spices. From the essential Cuban sandwich to guava barbecue sauces, these restaurants have the best Cuban food in the Magic City.

To have a list of exemplary Cuban restaurants in Miami and not include Versailles would be like saying the Empire State Building is just a building in New York. For nearly 50 years, this pillar of Calle Ocho has drawn locals and tourists alike to its comprehensive Cuban cuisine offerings, especially for deep cuts like their marinated roast pork plate. The atmosphere rides the line between class and kitsch, pulling ornate design elements from its namesake French palace. People don’t always note France’s influence on Cuban food, but you can find it throughout Versailles’ menu in croquettes, jus dishes, and gratins.

For a modern look at Americanized Cuban food, look no further than Havana Harry’s. This Coral Gables restaurant serves up vaca frita that the whole city talks about. But, two beverages pull the most focus: the mojito and the milkshake. Havana Harry’s often tops best mojito lists with its perfectly muddled, just-sweet-enough blends. On the non-alcoholic side, their milkshakes come topped with full desserts, often a slice of cake with more ice cream on top. If you have someone to share the sweetness with, one of their massive tres leches shakes won’t disappoint.

Restaurant, Cuban, Caribbean, Spanish
Facebook
Email
Twitter
Pinterest
Copy link
Share
Brush up on your Spanish before heading to La Carreta, and expect nothing less than cuisine authenticity. This abuela-style diner on Calle Ocho has served comforting dishes for nearly 50 years. Despite other locations popping up (there’s even one at the airport for a last-minute fix), this Calle Ocho mainstay remains the most iconic. The cozy diner menu offers hits like their fresh croquetas (which you can also enjoy in a pressed sandwich), but the Cuban bread brought to the table is what keeps people coming back.

For a delicious Cuban brunch, head to the Sergio’s in Coral Gables. They make a memorable eggs benedict on Cuban toast that you should definitely add lechón to instead of ham or bacon. Pair your brunch with one of their Cuban coffee varieties, or go for one of their unique mimosa flavors like guava berry or a refreshing watermelon bellini. 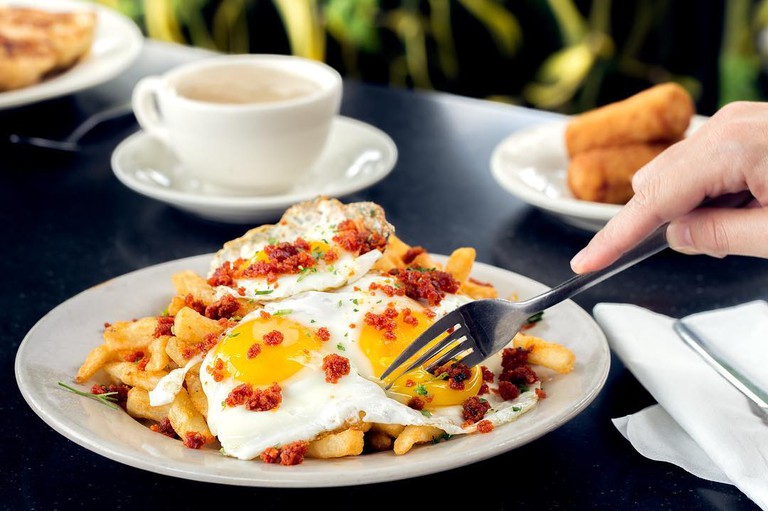 Not nearly as expensive as its neighborhood might suggest, Puerto Sagua is a gem that everyone knows about, but doesn’t really talk about in an act of preservation. This Miami Beach diner draws big crowds for their vaca frita and ropa vieja, despite also having venerated seafood and breakfast offerings. What you actually need to order is the oxtail, where tender beef falls off the bone in a flavorful, hearty stew. 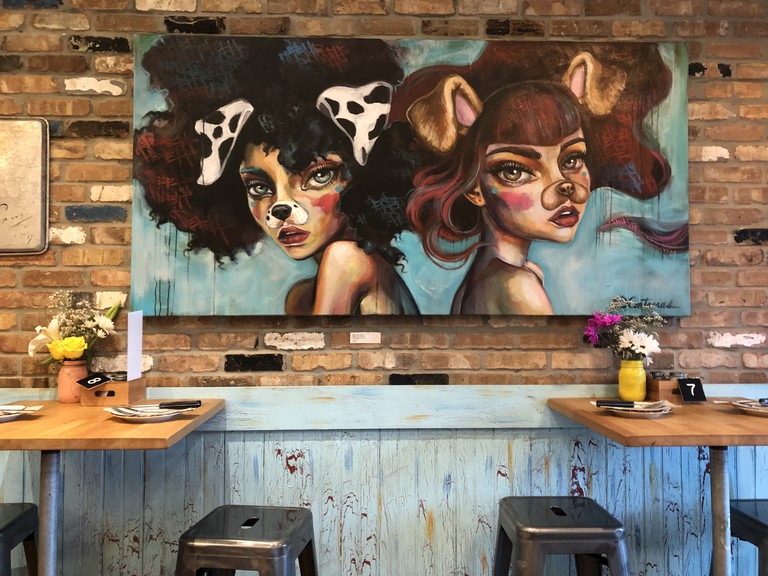 Cuban, Asian, and soul food collide at this Little Havana restaurant. The back patio has the neighborhood charm, while inside has a hip, trendy aesthetic with its colorful industrial chairs and chalkboard menu. Lechón asado buns and a fried chicken and waffles with guava marmalade might distract you, but El HungryQban is the right place to start. You get their highly respected Cuban sandwich pressed with their award-winning chorizo croquettes inside.

Restaurant, Asian, Fusion, $$$
Facebook
Email
Twitter
Pinterest
Copy link
Share
It doesn’t get more west Miami than Tamiami, one of the most densely Cuban areas in the United States. Finka Table and Tap takes a Cuban base and throws Peruvian and Korean elements into the mix for a thoroughly unique dining experience. Their Cuban bibimbap bowl balances vaca frita with plantains, bean sprouts, and kimchi. Locals and tourists enjoy the playful elevations of this gastropub’s fusion as much as they enjoy the craft cocktails and beer. 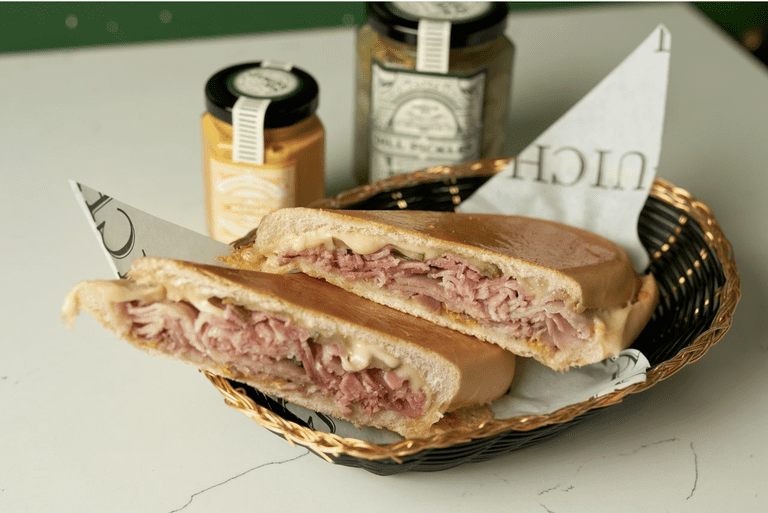 This is it. This strip mall shop is where you’ll find the best Cuban sandwich in Miami. The other restaurants on this list put forth very strong contenders, which simply underscores the flavor and care used at Sanguich de Miami. Every component is made in-house at this Calle Ocho sandwich shop, and you can feel the difference in the food. The Spanish-inspired café layout sparkles amid the rustic charm of Little Havana.

This elevated Cuban restaurant offers an affordable menu paired with a white-tablecloth ambiance. Live piano plays in the background on the weekends as you power through the large portions. The proximity to the airport and its moat of hotels makes for a more tourist-heavy crowd, but plenty of local regulars give the restaurant some street cred. Though there’s something for everyone on the menu, the empanadas are an essential first-trip order.

If you’re in Edgewater, you’re heading to Enriqueta’s. Constantly engaged in a battle for the best Cuban sandwich, it’s a photo finish behind Sanguich de Miami. Considering Enriqueta’s performs so well at a lower price point, leaving their Cubano out of this list would be sacrilege. For something unique, go for their steak sandwich (pan de bistec) instead – it’s untouchably the best in the area.

Restaurant, Cuban, $$$
Facebook
Email
Twitter
Pinterest
Copy link
Share
Ropa vieja is a tender, shredded meat staple that any Cuban restaurant should do well. Larios makes a tantalizing ropa vieja in its eye-catching South Beach restaurant. The patio looks out to the ocean, the view obscured only by a few palm trees. Started by the Estefans, as in Latin pop star Gloria Estefan, the restaurant tends to attract a few celebrities, and the $30–40 valet caters to a more affluent crowd.

In the shadow of the airport, this Flagami neighborhood haunt will surprise you. Nestled in a strip mall, this restaurant offers traditional Cuban fare with an infusion of Creole dishes and an out-of-left-field Italian section. Regulars rave about their stuffed plantains, which can be filled with either chicken or beef, as well as the gigantic portions.

The Estefans’ restaurant empire continues to impress in the Design District. If you can’t buy something at a neighboring store like Bulgari or Hermès without flinching, Estefan Kitchen will feel overpriced. Once you accept the luxurious location and atmosphere as part of your tab, you’ll enjoy $18 appetizers like their decadent lechón flatbread. On Fridays and Saturdays, the restaurant takes on an elevated club vibe with live music and a salsa-friendly dance floor.