The tent is gone and the South Beach sands returned to beach-goers, but SCOPE Miami Beach once again leaves an indelible mark on Miami’s illustrious Art Week. It’s not an easy feat. Apart from the main fair, Art Basel, there were 20+ satellite fairs, as well as major art shows at all of the city’s museums, gallery openings, and street art festivities. 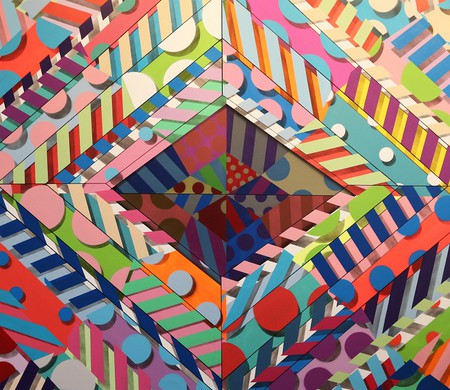 With over 75 art fairs spanning more than 15 years, SCOPE is celebrated as the premier showcase for international emerging contemporary art and multi-disciplinary creative programming. Alongside well-established exhibitors, SCOPE’s programming features three curated sections: Juxtapoz Presents, the Breeder Program, and FEATURE. This year, the fair welcomed 115 international exhibitors from 22 countries and 57 cities. Here are some of the highlights.

For its SCOPE debut, Street Art Anarchy Gallery (New York City) presented Seascapes with new works by 2501 and Jason Woodside, plus theme related works of Roy Lichtenstein and Tom Wesselmann. The show was curated by Suzanne Erdes, a renowned expert who works for major collections and institutions. New York transplant Jason Woodside draws inspiration from his Miami roots to create his signature imprint of patterns and bold colors, to which he mixes different textures and contrasts to create a focus. His murals can be found in NYC, Los Angeles, Paris and Sydney, and collaborations and commissions include Colette, Adidas, Saatchi & Saatchi, Haydenshapes, Wework, and Obey Clothing. SAA Gallery began in 2012 as a private social media Instagram account that documented street art before being cleaned off. Today, with more than 196,000 followers, the gallery continues to support the creative genius by exposing exceptional fine artists through curated ephemeral, pop-up shows. 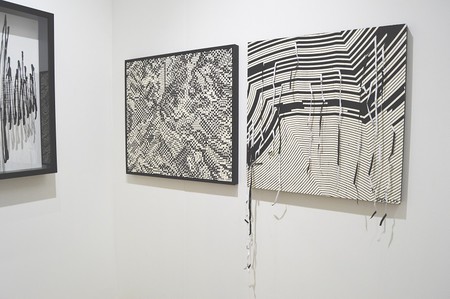 SCOPE’s Breeder program introduces new galleries to the contemporary market. Celaya Brothers Gallery (México, D.F.) exhibited works by acclaimed Italian street artist duo, Sten Lex. The pair who began their career in 2001 on the streets of Rome is best known for developing the halftone stencil technique, where the main parts of their portraits are composed by thousands of lines and strips of paper. The images appear abstract from up close and only reveal their representational nature when seen from far away. In the works produced for Celaya Brothers, Sten Lex created paper cuts, a technique very common in China, along with canvasses inspired by Mitla architecture. 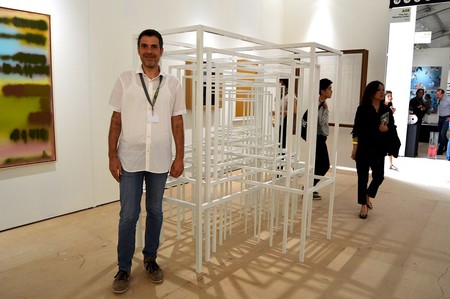 Italian artist Paolo Cavinato was on hand at The Flat – Massimo Carasi (Milan) booth to present his new sculptural works. Through a variety of expressive techniques, Cavinato creates multi-sensory spaces in which images of reality converge as rational constructions and emotive projections. The format for his new sculpture begins with eight table-like forms, each made up of 16 pieces. The geometric work can stand compressed or expanded, taking on a variety of different forms. In his art, the spectator finds himself in a sort of limbo, between finite and infinite time. The room, the installation, or the object is often the concentration of a constantly changing, empty space. 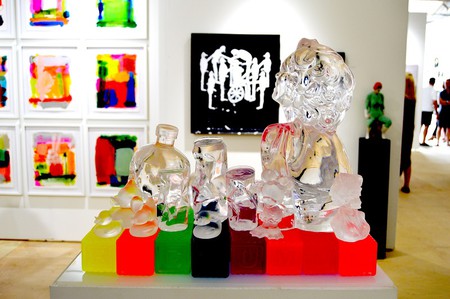 Castle Fitzjohns (New York City) featured new resin still lifes and sculptures by Sam Tufnell. Tufnell does not sculpt or model an original and prefers to use ‘ready-made’ pieces to make castings. Most of the items he casts are bought at the supermarket, and he intentionally chooses objects that are easily identifiable. Tufnell draws inspiration from Pop art and still life painting and is interested in creating sculpture that draws on pictorial composition. Rather than create a singular object, Tufnell’s still life sculptures convey the relationship between objects. 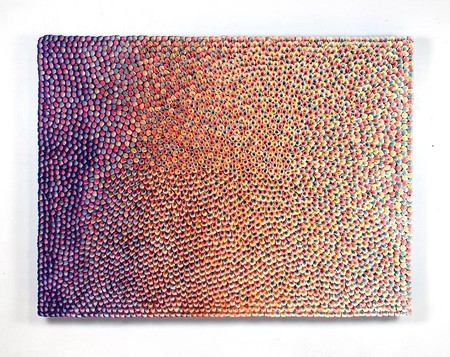 Modus Art Gallery (Paris) exhibited recent works by Zhuang Hong Yi. Zhuang’s works merge ancient artistic tradition of his Chinese heritage with contemporary influence from his permanent home in Holland. He painstakingly pieces together rice paper petals that are individually painted with acrylic and oil pigment. Zhuang’s work calls to mind Impressionist paintings where fleeting moments of light and dominant colors shift as the viewer moves from one side of the painting to the other. 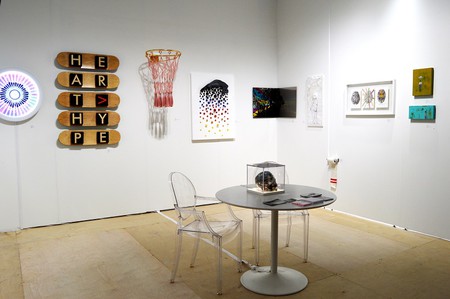 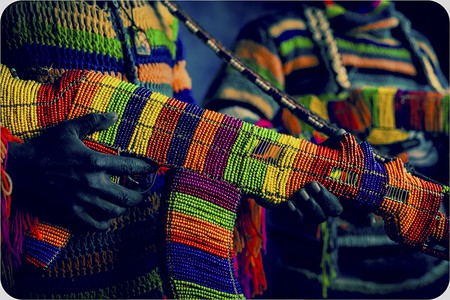 As part of their booth, C.A.V.E. Gallery (Venice, CA) exhibited photographs by South African artist Ralph Ziman titled, Ghosts. This body of work, Ziman explains, ‘confronts the issue of international arms trade and Africa. Arms that are paid for and imported into Africa are being used by individuals not just for defense but often by corrupt, autocratic governments to oppress their own people.’ Ziman had six Zimbabwean artists use traditional African beads and wire to manufacture several hundred replica beaded guns like AK-47s — an iconic weapon that is loved, revered and fetishized in Africa. The bold colors of the beaded guns become focal points in each photograph that depicts the subjects (the artists and bystanders) in crime ridden, downtown Johannesburg. Ziman remarks that he was amazed how each subject knew exactly how to ‘model’ a gun, transposing the artificial into something strikingly violent and poignant.