A Guide To Miami's Must-Visit Museums

A Guide To Miami's Must-Visit Museums

Ugo Rondinone’s 'Miami Mountain' at The Bass, Miami. © The Bass
Miami offers plenty of things for visitors and residents to see and do – while the beaches are always tempting, so are the shops, restaurants and clubs. However, there’s more to Miami than just an opportunity to eat well and party all night. Here, Culture Trip offers a guide to the best museums of Miami.

Museum, Building, Library
The Bass is conveniently and beautifully located on Miami Beach. Founded in 1964 in a 1930s Art Deco building that was formally the Miami Beach Public Library and Art Center, The Bass specializes in exhibiting international contemporary art to excite, challenge, and educate the community. Currently undergoing a major renovation, The Bass will reopen in 2017 and to give an impression of what can be expected, visitors to Miami can enjoy Ugo Rondinone’s brightly colored 42-feet tall sculpture, Miami Mountain.Recently acquired by the museum to launch their new acquisitions initiative, the work is on view at Collins Park.
Permanently closed
More Info
Open In Google Maps
2100 Collins Avenue, City Center, Miami Beach, Florida, 33139, USA
+13056737530
View menu
Visit website
Visit Facebook page
Send an Email
Give us feedback

Museum, Park, Botanical Garden
The Vizcaya Museum and Gardens is a National Historic Landmark | © Joerg Hackemann / Alamy Stock Photo
Book Now
Built during the First World War, the Vizcaya House and surrounding villas were built as a winter estate for a man named James Deering. The surrounding gardens were modeled after European styled gardens that were popular during that time. Later, though, the Vizcaya Villa and Garden were desperately in need of renovation and were eventually sold to Miami-Dade County for $1 million and converted into the Dade-County Art Museum. The beautiful art pieces and antiquities within the Villa were also donated to the Museum by the heirs of James Deering.
More Info
Open In Google Maps
3251 South Miami Avenue, Coconut Grove, Miami, Florida, 33129, USA
+13052509133
View menu
Visit website
Visit Facebook page
Send an Email
Give us feedback

The Perez Art Museum is a contemporary art museum that relocated in 2013 to the Museum Park in downtown Miami. A new building was added that same year and within four months of the grand opening, the museum saw record attendance with over 150,000 visitors. The focus of the museum is 20th century and contemporary art, as well as cultures of the Atlantic Rim. The museum’s holdings include 1,800 objects, nearly 500 of which were acquired in 2013, including pieces by John Baldessari, Olafur Eliasson and Dan Flavin. 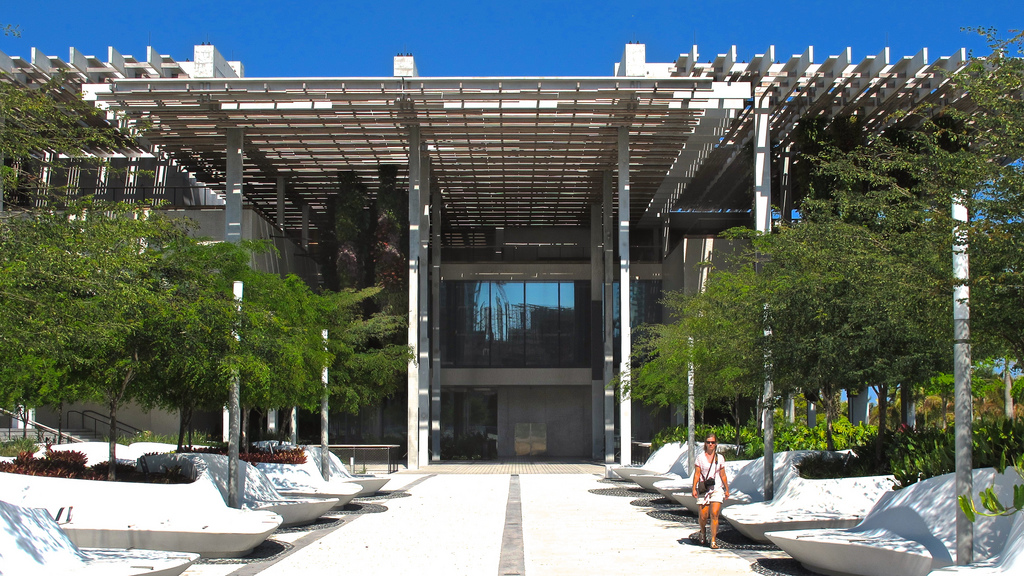 Botanical Garden, Museum, Park
This unique blend of art and wilderness is a wonder to behold | Knight Foundation/Wikipedia Commons
The Fairchild Tropical Botanic Garden is not a typical museum; it’s a nonprofit organization that operates in a number of different ways to fulfill their mission of inspiring knowledge and love for the environment. The gardens are a perfect place to be awed by the beauty of tropical South Florida vegetation. The founders of the botanical gardens, Robert Montgomery and David Fairchild, dedicated themselves to collecting, documenting and studying tropical and subtropical plants from around the world. The legacy of the two men lives on as the Fairchild collection of plant species continues to grow each year.
More Info
Open In Google Maps
10901 Old Cutler Road, Coral Gables, Florida, 33156, USA
+13056671651
View menu
Visit website
Visit Facebook page
Send an Email
Give us feedback

Museum
Interior of Miami Children's Museum | Interior of Miami Children's Museum
Here’s a perfect one for the kids — if you live in Miami and have children, or plan on visiting here with young ones, then make sure to plan a day at the Miami Children’s Museum. Classrooms, summer camps and interactive exhibits are just a few of the features that go into making the museum an excellent educational experience. The museum offers hundreds of bilingual exhibits as well as programs and learning materials related to arts, culture, community and communication.
More Info
Open In Google Maps
980 MacArthur Causeway, Watson Island, Miami, Florida, 33132, USA
+13053735437
View menu
Visit website
Visit Facebook page
Send an Email
Give us feedback

Building, Museum
The sala del primo rinascimento | Stefenetti E./Wikipedia Commons
From its origins as a small three classroom building in 1950, the history of the Lowe Art Museum reflects an unwavering commitment to fulfill its long lasting mission of serving the University of Miami as a teaching resource. With the gift in 1950 by philanthropists Joe and Emily Lowe, a free-standing museum facility opened to the public in 1952, making it the first art museum in South Florida. This is a fun and educational destination, making it perfect for a family visit on the weekend.
More Info
Open In Google Maps
1301 Stanford Drive, Riviera, Miami, Florida, 33146, USA
+13052843535
View menu
Visit website
Visit Facebook page
Send an Email
Give us feedback

Museum
HistoryMiami Museum was founded in 1940 | © History Miami
HistoryMiami Museum, formerly known as the Historical Museum of Southern Florida, was founded in 1940 and is the largest history museum in the state of Florida. The museum offers the community, its residents and visitors meaningful ways to connect to the rich past and ever-evolving future of the region and its diverse inhabitants.
More Info
Open In Google Maps
101 West Flagler Street, Government Center, Miami, Florida, 33130, USA
+13053751492
View menu
Visit website
Visit Facebook page
Send an Email
Give us feedback

Museum, Library, University
The contemporary functionalist exhibit | Daderot/Wikipedia Commons
The Wolfsonian‘s collection comprises approximately 180,000 objects from the 1850s to 1950s – the height of the Industrial Revolution – in a variety of media, including furniture, industrial-design objects, glass works and ceramics. The mission of the museum is to show the persuasive power of art and design and to explore what it means to be modern. Museum hours vary so make sure to look at the schedule before you go.
More Info
Open In Google Maps
1001 Washington Avenue, South Beach, Miami Beach, Florida, 33139, USA
+13055311001
View menu
Visit website
Visit Facebook page
Send an Email
Give us feedback

Museum
An outdoor exhibit at the Museum of Contemporary Art | Wikipedia Common
The Museum of Contemporary Art (MOCA), is guaranteed to impress you through its provocative and innovative artworks. The best part about this museum is how often they change their exhibits, presenting anywhere from eight to ten exhibitions annually. If you’ve had enough of the Miami party life and are interested in learning about the creative ways in which local artists express themselves, be sure to plan a visit to MOCA.
More Info
Open In Google Maps
770 Northeast 125th Street, North Miami, Florida, 33161, USA
+13058936211
View menu
Visit website
Visit Facebook page
Send an Email
Give us feedback
Book with our partner and we will earn a small commission.
Give us feedback