Miami Baker Invents Croqueta Cake. What Is It exactly? 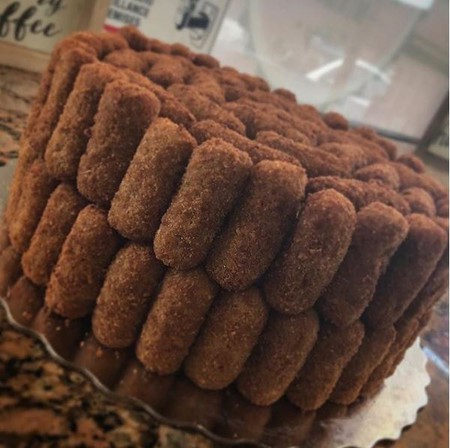 One Cuban baker in Miami broke the mold when he posted a picture of his three-layer, vanilla-and-Nutella-filled pound cake bordered by a wall of crispy croquetas. The Croqueta Cake has instantly become a phenomenon, earning over 600 likes and the quizzical brow of the local community.

For those not familiar with what a croqueta is, the Cuban finger food is a breaded roll stuffed with smashed ham which is eaten as a breakfast side with other Cuban pastelitos (flaky pastries), or enjoyed as a party snack. However, the pairing of the savory fried roll with the sweetness of a cake was an unlikely mix – until now. Baker Andy Herrera, owner of Breadman Miami Bakery, decided to go with his gut when he created the unconventional cake.

His idea stemmed from a coincidental moment at a party he was attending. He was trying to pick out a croqueta from a platter of food at the table, but one of the croquetas had rolled off the platter and bumped against a nearby cake. When he picked up the croqueta dipped in vanilla frosting, his taste buds twitched. Herrera would go to work on his new masterpiece.

A visit to his bakery in the neighborhood of Hialeah gives locals a taste of Herrera’s eccentric food ideas. Aside from traditional baked goods such as tequenos (cheese finger rolls), and beef empanadas, his menu contains a few unconventional choices including Nutella and cream cheese pastries. Odd-sounding, but original, local patrons can’t help but try Herrara’s twisted creations.

The Croqueta Cake with 100 croquetas and whipped vanilla frosting sells for $56.