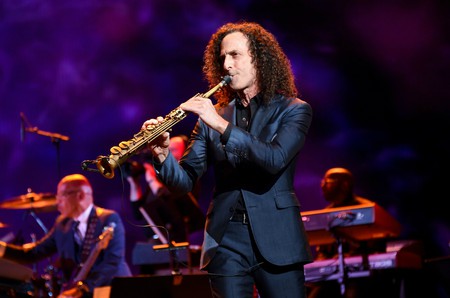 Between the forced removal of a passenger on a United Airlines flight and an alleged stroller incident on an American Airlines flight, things are pretty rocky in the skies these days. And while Delta has also faced some rough patches recently, some positive news has finally emerged in the key of Kenny G.

When he’s not informing the people of China that the work hours have come to a close or performing on top of a toilet paper castle in Times Square, Kenny G takes to the skies for impromptu concerts to raise money for the American Cancer Society.

As reported by Consequence of Sound (and confirmed by Tampa Bay ABC affiliate WFTS), Kenny G was tapped while flying from Tampa Bay to Los Angeles by an off-duty Delta flight attendant named Jane who has been working with the fundraising charity event Relay For Life since she lost her daughter to brain cancer at the age of 30. He agreed to deliver the sounds of his sweet sax if the passengers could raise $1,000. Within five minutes, the goal was nearly doubled, and Kenny G followed through with what will surely be an unforgettable experience for all involved.

Check out two videos below, including one from TMZ, in which Kenny G explains that he needs to brush his teeth before playing.