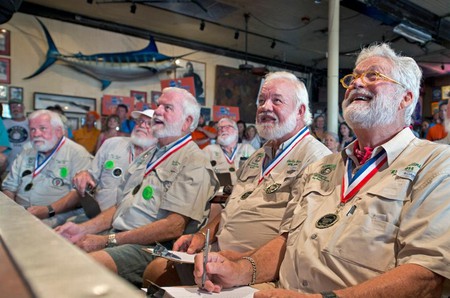 Hemingway Days commemorates the life and legacy of Ernest Hemingway. Revolving around his birthday on July 21, the festival is full of fun competitions, literary readings, and plenty of costumes. Hemingway, also known as Papa, is sometimes called the greatest American writer of the 20th century, though that position has been challenged as conversations around American writers have shifted. But for most attendees, Hemingway Days is more about the event and less about the specifics of the writer.

“I really love doing literary pilgrimages,” says Selena Chambers, author of Call for Submission, who read her fiction at the 2017 festivities. “So that was as good an excuse as any to book it to Key West.”

Many of the festivities are centered around Sloppy Joe’s Bar, a favorite watering hole of Papa’s during his years on the island. The celebration includes many of Hemingway’s loves, from fishing to writing, and even a The Sun Also Rises-influenced pseudo running of the bulls.

Hemingway lived in Key West during the 1930s while he was still a young man. While he was there, he frequented the waters around the Florida Keys in pursuit of his favorite pastime: fishing. His ventures and passions often influenced his writing; for example, The Old Man and the Sea follows a man’s quest for a marlin, popular prey among sport fishers in Florida.

Stationed in Old Town Key West, Hemingway’s house is open year round for visitors, and many guests are delighted by the chance to meet one of the many cats who live on the property, descendants of Papa’s own pets. While the famous connection is something to note, it is probably the cat’s extra toes that have brought them the most curious of visitors. 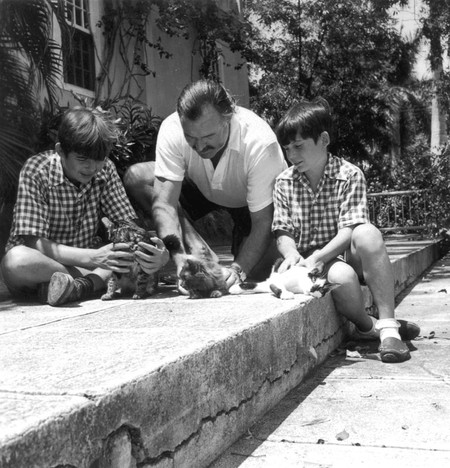 Here’s what you can expect throughout the five-day festival:

What started as a fun look-alike contest has evolved over the years to include a scholarship fundraiser for local community colleges. Since 1981, white men with beards have gathered in Sloppy Joe’s to compete for who bares the most resemblance to Ernest Hemingway.

“You really do have to see it to believe it,” says Selena Chambers. “It’s very bizarre, but not in a rowdy, ‘shots shots shots’ way… These guys are really serious about their Hemingway cos-play, and the number of contestants and their family are large enough alone to fill Sloppy Joe’s to capacity.”

But it takes more than just a beard to pull off this impersonation. Participants will read poems, sing, and shadow-box, all hoping to convince a panel of judges that they have the personality to win. There is an amusing irony to the contest, as the participants always wear his signature white beard, a feature of Hemingway’s that only turned white after he was no longer living in Florida. 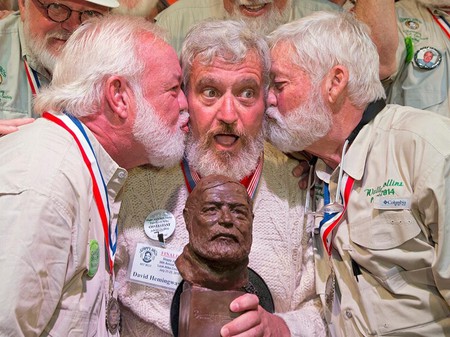 The 2018 festivities will feature even more author readings than years past, but literature has always been an inherent feature of Hemingway Days. The first day is filled with readings and presentations from Hemingway scholars. Every reading focuses on Papa or his beloved Florida.

Readers for the 2018 celebrations include Kirk Curnutt, author of Coffee with Hemingway, Ashley Oliphant, author of Hemingway and Bimini: The Birth of Sport Fishing at ‘The End of the World,’ and more. This year even includes a film screening of The Hemingway Monologues: Life and Death in Key West.

Running of the bulls

In 1926, Hemingway published The Sun Also Rises, a novel about a group of American and British expatriates who travel to Spain to watch the running of the bulls during the festival of San Fermín in Pamplona.

While this event is inspired by Spanish tradition, absolutely no animals are harmed in the enactment of this storied practice. Instead of using real animals, runners use wooden bulls. One person rides the bull while it is pulled forward by several others. Don’t expect this race to be quite as exhilarating as the name suggests, it is more of a parade than a race—but it is still a hilarious sight. 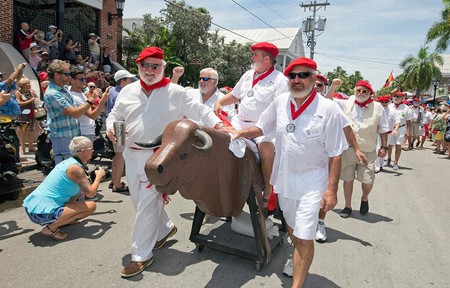 No celebration of Ernest Hemingway’s presence in Florida would be complete without a fishing contest. Anglers compete for $50,000 with a catch-and-release competition. The fishers aim for marlin, spearfish, sailfish, dolphin fish, tuna, and wahoo, then toss them back into the Gulf of Mexico. The tournament is limited to 75 boats, so expect fierce competition.

Want to See for Yourself?

Everyone is invited to watch the celebrations, with most events being free and open to the public. However, some events are so popular that you’ll have to plan ahead for a spot. “It’s hard to get a seat, much less a drink,” Chambers says of the look-alike contest, but the festivities will inevitably spill out into the streets of Key West, ensuring that everyone in town will have the chance to celebrate the life and work of Ernest Hemingway.

For more information about the schedule of events and to purchase tickets, check out the Hemingway Days website.

This post was originally written by Sally Pidgeon, and has been updated.