Everything You Need To Know About Florida’s Neptune Memorial Reef

Off the Florida shore, more and more people are sleeping with the fishes. The Neptune Memorial Reef contains the remains of hundreds of people, 40 feet (12 metres) down in clear seas near Miami.

Here, you’ll find statues of lions, pillars, benches, passages and a sundial, alongside sculptures of shells and starfish. These sculptures are spaces where the ashes of people who’ve been cremated can be mixed with natural concrete to form a lasting memorial.

The result is a surreal undersea world, with barnacles and coral forming around the classic features of a cemetery. Colorful fish, eels and lobsters dart around plaques and arches, the blue sea and bright colors mixing with more somber reminders of death to create a site that looks back in sorrow but is also full of life. 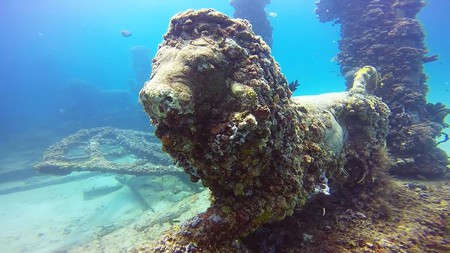 Being buried in Atlantis

The reef opened in 2007, and was inspired by the legendary undersea city of Atlantis. At first, it had space for only a few hundred remains, but it continues to expand and aims to eventually contain 125,000 ‘placements’ across 16 acres (6.5 hectares).

The site, three miles (five kilometers) off Key Biscayne – which is connected to Miami by bridge – is free to visit. Anyone can dive here, although fishing is not permitted. Preserving your remains here is called ‘deployment,’ and various packages are available, including arranging family plots. Family members can watch the deployment from a boat or by diving to the memorial reef itself.

The life of the reef

Placing large objects on the seabed often encourages life, by providing hiding places for fish, reducing erosion and providing multiple surfaces for creatures such as corals and oysters to attach to. These animals then attract larger species, encouraging a flourishing ecosystem. There’s some doubt over just how beneficial artificial reefs are, and some biologists believe most animals move to the new reef from neighboring areas, rather than actually developing on it.

According to its founders, the Neptune Memorial Reef has been very successful in transforming its environment. Hundreds of coral colonies, bluehead wrasse, bar jacks, sergeant majors, spiny lobsters, long-spined sea urchins, moray eels and rainbow parrotfish can all be seen in the reef – alongside plaques celebrating many human lives.