A Guide To The Best Delis In Miami 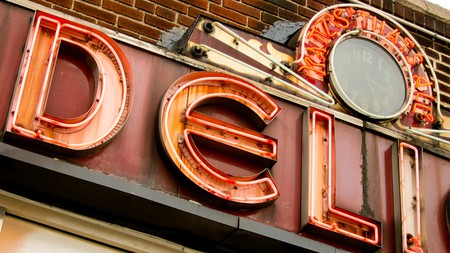 Looking for your next favorite deli spot in Miami? We've got you covered | Photo courtesy of Eric Wittman

Miami has got hundreds of places to eat but what does that matter if you don’t get what you want? We at Culture Trip know the recipe to success when it comes to deli sandwiches. Freshly baked bread, quality meats, fresh ingredients and friendly service are the cornerstones of success in this industry. Here, we present a list of Miami’s best delis and the only problem you’ll have is deciding which one to visit first.

This brick-walled deli specializes in bagels and sandwiches. If you’re looking for the most delicious bagels and are in the Brickell area be sure to stop by Toasted Bagelry & Deli, where brothers Islam and Khaled Mohammed have been serving up mouth-watering specialty bagels, breakfast items, lunch specials, and other amazing treats since 2001. They moved here from Egypt 16 years ago and have been working to make their dreams a reality ever since. They offer take-out, dine-in, and delivery!

The only circle of trust you should have is a bagel. They will NEVER let you down. Especially at Toasted, also known as Miami's best bagelry. In a small spot in Brickell exists a bagel joint lined with exposed brick and filled with tasty treats. I had a multigrain bagel stuffed with avocado, tomato, lettuce and chicken salad. You might also try some of their omelette, burger or pastry options. Double chocolate muffins, yes please! So in conclusion maybe you should trust me too, since I lead you to the trustworthy bagels, just saying. #thenewblackmiami PS. Bagels are like doughnuts with the sin removed.

Roast beef, pastrami, corned beef…whatever meat you can name, Premos Deli has it; and they won’t hesitate to pile it on to the freshly baked bread that they make every day. They’re dedicated to quality sandwiches, using fresh ingredients and the highest quality meats. Premos also caters for large parties and formal business events, which is worth remembering if you ever need somewhere for a gathering. First timers should always try their signature Cuban sandwich – everyone falls in love with it.

Deli, Bakery, Pastry Shop, French, $$$
Facebook
Email
Twitter
Pinterest
Copy link
Share
Map View
Amid the fast-paced hustle and bustle of Miami’s Design District, Buena Vista Deli is a welcome reminder to slow down and enjoy the finer things in life. You have to try the Buena Vista Deli Combo, which offers the best bang for your buck. It comes with a sandwich or Panini, a choice of soup or salad, and a drink. This place is popping during lunch hour, as the residents, shop owners, and shoppers of the design district flock to Buena Vista for a taste of gourmet cheese and artisan crafted breads.
Open In Google Maps
4590 Northeast 2nd Avenue, Miami, Florida, 33137, USA
+13055763945
Visit Website
Give us feedback

Restaurant, Sandwich Shop, European, Fast Food, 0
Facebook
Email
Twitter
Pinterest
Copy link
Share
Europa Delicatessen is the designated sandwich shop on Miami Beach. The competition might as well relocate, because nobody is more committed to crafting mouth-watering meals and delivering excellent customer service like Europa. We suggest you try one of their specialty sandwiches, such as the Rinder Ripperl, which consists of slow braised short ribs, melted Gruyere, caramelized onion, and baby greens. You can taste the flavors of Germany too simply by ordering from their selection of Schnitzel Sandwiches.
Open In Google Maps
Give us feedback

Deli, Restaurant, Cuban, American, $$$
Facebook
Email
Twitter
Pinterest
Copy link
Share
Map View
When you think of Hialeah you don’t typically think of an old-school Jewish deli. But that’s exactly what we have here, and the Cuban dominated neighborhood is happy to have them. Not to mention that the grandfather of their beloved Miami Heat basketball player Udonis Haslem works as the cook. Talk about staying true to your Miami roots! Stephen’s Restaurant has been cranking out deli staples for over 60 years in the New York Style, and furthermore they have a different lunch special everyday. The matzoh ball soup is legendary in these parts!
Open In Google Maps
1000 East 16th Street, Hialeah, Florida, Florida, 33010, USA
+13058878863
Give us feedback

This Israeli deli does the carb-conscious 2016 version of offering a free basket of bread by serving up a fresh salad as soon as you sit down instead. So now you can feel great and tell the world that you ate a salad with your lunch. But let’s be honest, you came here so you could look through an epic menu full of kosher meats, pita sandwiches, and other Israeli staples. Choose wisely; are you in the mood for a kebab or falafel? Or how about their mouth watering Moroccan fish? You should also know that Etzel Itzik does one heck of an Israeli breakfast!

Bakery, Deli, American, Seafood, $$$
Facebook
Email
Twitter
Pinterest
Copy link
Share
Map View
Located in North Miami, near Bal Harbour, is Josh’s Deli. Named after its owner/chef Josh Marcus, this location brings to deli food the creativity and originality that Josh learned as a head chef in New York. Sure he has a menu full of deli classics like pastrami sandwiches, but that pastrami’s made from 10-day-aged Angus brisket, setting it apart from your average sandwich shop. Add to the list Josh’s duck prosciutto, three-hour brine-soaked black cod, and of course, the Jewban with pastrami, slow-roasted pork, pickles, and Swiss, and you have one hell of a deli menu.
Open In Google Maps
9517 Harding Avenue, Surfside, Florida, 33154, USA
+13053978494
Give us feedback

Made In Italy Gourmet

Known as one of Edgewater’s trendiest Wine Bars, Made In Italy Gourmet has got cases upon cases of Italian meats and cheeses, as well as hard-to-find Italian grocery products and sandwiches made on fresh-baked bread. Their location is beautifully designed to make customers feel as if they’re in the heart of Italy, drinking fine wines and eating freshly baked bread. It makes sense though, you can’t have a trendy deli near Miami’s art and design districts without beautifying the walls and making everything look so darn artsy. In fact, they are so switched on that they even offer a gluten-free baguette.