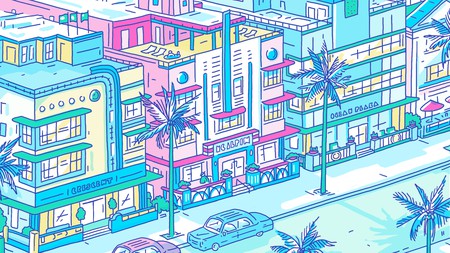 With the largest concentration of Art Deco buildings in the world, the historic Art Deco District of Miami still oozes 1930s glamour, its oceanfront lined with ice-cream-pastel hotels and zingy neon lights. Discover the history of Miami Beach and how it became such a unique architectural treasure trove.

It’s hard to imagine the sunseekers’ paradise of Miami Beach as a swampy, mosquito-infested wasteland, but that’s how automobile pioneer Carl Fisher discovered it while on vacation in 1910. Others couldn’t see the forest for the mangroves and palmettos, but Fisher, a well-known visionary, pictured transforming the 3,500-acre (1,400-hectare) landmass into the perfect getaway for himself and his car-industry pals. In 1912, he decided to buy a holiday home in the area and swiftly bought up the land, dubbing his future haven “Miami Beach.” 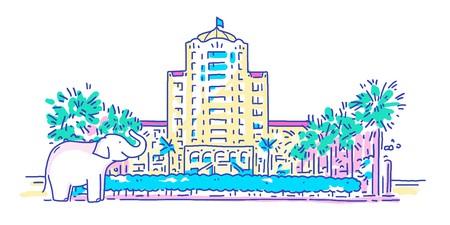 Fisher financed the draining of Biscayne Bay and from there started building his empire of oceanfront estates and luxury hotels, including the famous bright-pink Flamingo Hotel. Miami Beach’s first truly grand accommodation, it even had a resident elephant, Rosie. Fisher pulled off spectacular publicity stunts to promote Miami Beach as the resort destination for the wealthy elite and Hollywood players – he even had the animal pose as a golf caddy for vacationing President-elect Warren G Harding in a bid to sell the beach as an exotic vacation destination.

By the 1930s, Fisher’s little piece of paradise in Florida became America’s most fashionable holiday hotspot. As a result, property prices soared. Despite the devastating 1926 hurricane and the real estate shock during the Great Depression, developers remained interested in Miami Beach. Fancy hotels and luxury condominiums began to crop up along the coastline, all in the style du jour, Art Deco. Fisher knew that to keep up with the world’s sophisticates, he needed to follow the Art Moderne movement that was sweeping across Europe at the time, with Floridian architects Henry Hohauser and Lawrence Murray Dixon cementing the signature Miami Beach style.

The architects became famous for their introduction of streamlined curves, window “eyebrows” and the “law of three” – all trademark features of Miami’s Art Deco buildings. No structure was taller than three stories high, and each was built in three sections, the center of the building playing big brother to its smaller twin siblings on either side. The Colony on Ocean Drive – a prime example of the “law of three” – was one of the early buildings erected during the Art Deco renaissance that revived Miami Beach after the hurricane, while Murray Dixon’s The McAlpin is probably one of the district’s most photographed buildings to date. Still standing proud as a model example of Art Deco architecture, the early 1940s building is perfectly symmetrical, eyebrows and all, sporting classic shades of pastel pink and turquoise.

Like all trends, the allure of Miami Beach’s Art Deco hotels faded over time, replaced by the post-war ‘MiMo’ movement – Miami Modern architecture – which was a response to the International Style, heavily influenced by the likes of Mies van der Rohe and Oscar Niemeyer. Gargantuan new complexes like the bow-tie-shaped Fontainebleau Hotel and the monolithic Eden Roc muscled their way in, leaving the Art Deco District to fall into disrepair and decay. Even with the new hotels, the area dropped off as a top summer destination, as long-distance air travel and the introduction of the Boeing 707 in the late 1950s allowed Americans to visit farther-flung, international places.

Miami Beach went from a playground for the rich and famous to a resort for retirees, as landlords and hoteliers converted many of the 1930s hotels into retirement homes for the lower and middle classes. By the 1970s, Miami Beach became the punchline to jokes from the likes of comedy legend Lenny Bruce; now the neighborhood was “where neon goes to die” and “heaven’s waiting room.” It had lost its soul, and sadly much of South Beach’s trademark Art Deco architecture fell victim to the wrecking ball.

Many other buildings of the time period were destined for a similar fate, but luckily a campaign to save them launched in the 1970s. Barbara Baer Capitman founded the Miami Design Preservation League (MDPL) in 1976 to help push for the area to become a historic architectural district. Stretching along Ocean Drive, Collins Avenue, Washington Avenue and between Fifth Street and 23rd Street, the one-mile zone became the nation’s first urban 20th-century historic district in 1979. Just a year later, Art Deco enthusiast Andy Warhol flew from New York to tour the area with the MDPL – an event widely covered by the press.

By the 1980s, it wasn’t just hardcore Art Deco fans visiting Miami Beach. Thanks in large part to the hit TV show Miami Vice (which was syndicated in 77 countries) and images of the South Beach skyline set to killer synth-rock beats, international interest in Miami’s sex appeal was reignited. Art Deco architecture became desirable once more, as developers re-embraced the city’s heritage rather than strip it away. 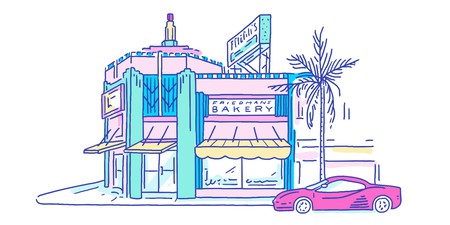 Many of the landmark hotels along Ocean Drive were given a major facelift by Baer Capitman’s artist friend and MDPL co-founder Leonard Horowitz, who created a special color palette to spruce up the dated properties of the district. “I’ll take care of the buildings,” said Horowitz in 1988 documentary Pastel Paradise, a film about South Beach and Horowitz’s involvement in its revival. “I’ll do the frosting on the cake because these look like they’re going to be a lot of fun to play with.” He tested out his palette on the all-white Friedman’s Bakery, which shocked residents initially, but eventually he won over the neighborhood, and South Beach was awash in his tropical scheme – Horowitz even found buildings unrelated to the project being painted in his pastel hues as others jumped on the bandwagon.

The perseverance of the MDPL duo did the trick, and new life was breathed into Miami Beach, which became revitalized as the buzzing international metropolis it had once been. The Art Deco movement was at the forefront of modernity, so it’s no surprise that its slick, streamlined looks and fresh pastel palette still feel super relevant today. As contemporary society endures uncertain times not unlike the Great Depression, Miami Beach’s pocketful of sunshine-inspired buildings provides a welcome dose of nostalgia in a world of steel and glass. If you fancy visiting Miami, check out our list of the coolest Art Deco hotels in Miami.