A Tour Of Miami's Most Powerful Street Art 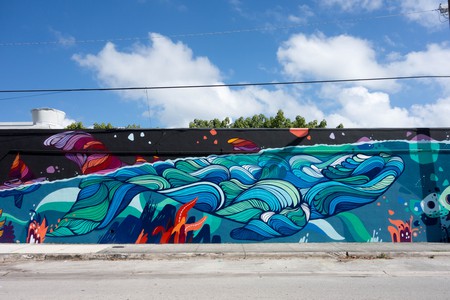 Wynwood, Miami, is home to some of the most creative street art in the world | Kent Wang/Flickr

Street art has the potential to change the world, one mural at a time. The artists that dedicate themselves to this craft truly believe that this is true, and that is what motivates them to make statements, be they political, comical, or uniquely strange in nature. Miami has some of the best street artists in the world, who come here from many different corners of the globe to take part in an expressionistic movement, in which artists can feel free to create for themselves while at the same time inspiring others. Here, The Culture Trip takes a look at some of Miami’s finest murals and most creatives artists.

Close to the corner of Northwest 2nd Avenue and Northwest 30th street, on the West side of the street, is where our tour starts. Dabs and Myla are an Australian couple whose artistic medium is graffiti and their canvas is usually a nice big wall. This creative couple is famous for their street art, and Miami’s art district is full of their comical genius. At this specific location they have decided to entertain passers-by with an animated comic strip about the art of seduction.

Perfect weather and THE ART OF SEDUCTION. A mural by @dabsmyla in Wynwood. #miami #wynwood #fox #dabsandmyla #streetart

Fumerosim is a self-descriptive term for the style of New York based artist Fumero, a professional artist based out of his Bushwick, Brooklyn studio, who has recently become one of the premier street artists in New York, and has done a lot of work, solo and collaborative, in Miami. Fumero’s unique approach to the exaggerated figure, colorful scenes and non-objective abstract compositions has added an exciting look to the American pop culture scene of contemporary art. The combination of his graffiti style and fine art illustration is referred to as grafstract expressionism, another term that he came up with. 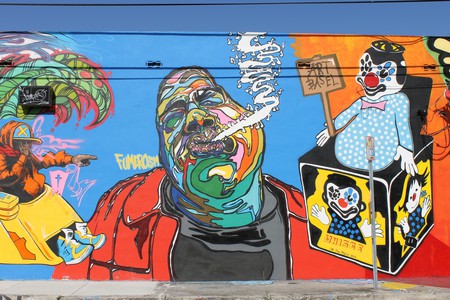 This remarkable set of murals in Wynwood were painted by French artist Kashink, a woman with a girlish face who wears a mustache drawn in black. Her art is about celebrating the diversity of mankind, and her 50 Cakes of Gay street art was inspired by the French demonstrations against gay marriage. Kashink has made her statement a global one, painting cakes around the world in support of gay marriage and equal rights.

This is without a doubt one of the most famous murals that Miami’s ever had. Painted for Art Basel 2013, by Brazilian born artist Eduardo Kobra, this piece of art resonates with anyone that has ever jammed to a Biggie or Tupac album. The use of color is extraordinary; the images of the two famous rappers immediately grabs the attention. Kobra uses his art to draw attention to those who have helped make the world a better place. Not often do we think of rappers as being the kind of people to change the world, but Biggie and Tupac sure did! 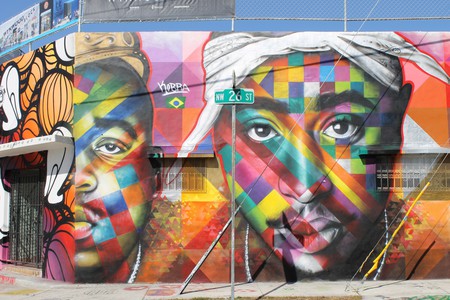 London-based artist, Lakwena Maciver, is the woman responsible for creating the bold and colorful mural that says ‘I remember paradise’ in big uppercase letters, in Miami’s Wynwood art district. Located on the corner of 3rd avenue and 27th street, this impressive mural is typical of Lakwena’s style, which looks to explore how the human instinct to decorate and adorn is shown through popular culture and within the urban environment. 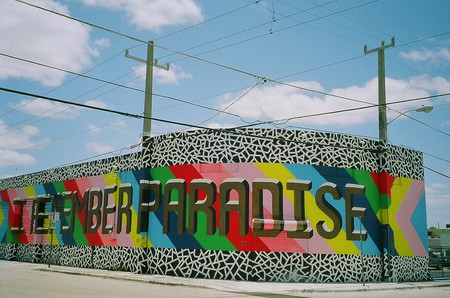 This Miami mural is a crowd favorite. Its part of the Oliver Gal collection, which is a collective of artists spearheaded by sisters and artists Lola Sánchez & Ana Gal. Inspired by the lifestyle and art scene of their living quarters in Miami, and photography from their travels around the world, their art collections are handcrafted with airy images, pop culture themes and striking layers of color.

Black and white stripes cover the 45,000 square foot building that was once a former shopping mall and has now been converted into a retro office-space building that houses some of Wynwood’s most brilliant art galleries. All the residents of Miami are familiar with this building, which acts as a beacon to the creative spirit that defines Wynwood. 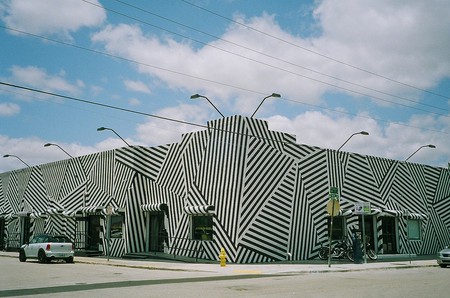 This mural resulted from a collaboration between artists Shepard Fairey and Cleon Patterson. They painted it last December in Wynwood, for Art Basel 2015. One of Cleon Paterson’s central themes is violence, which goes hand in hand with Shepard Fairey’s most prominent theme, the abuse of power. Last December these two visionaries put their heads (and paint brushes) together to create a mural that speaks to the corruptible and violent potential of money and power.

“Off the Ropes” Boxing Mural

Jace and Lucy McTier are an American couple with a dual passion for art and sport. The mural bellow is yet another one of Wynwood’s most bold and powerful pieces of art, in which Jace McTier has captured the ferocity, urgency, and desperateness of a boxer that has his back against the ropes and is punching his way out of trouble. The use of color in this mural really makes the powerful concept pop out to passers-by. Jace has created a niche for himself as a talented painter with a keen interest for boxing. Whether its on canvas or 20×60 foot wall in Miami, Jace McTier’s boxing art has a life of its own. 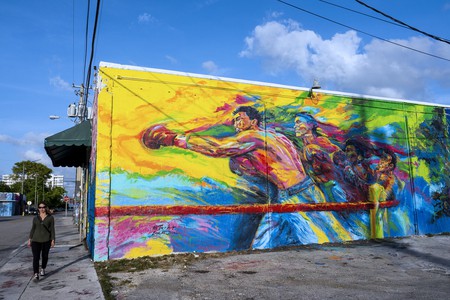 "Off the Ropes", Wynwood | Dan Perez/Flickr
Give us feedback