A Tour of Miami’s Famous TV and Film Locations 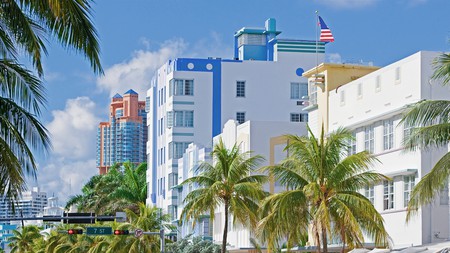 With Art Deco pastels and palm tree-lined streets, Miami’s sun-drenched backdrop plays a pivotal role in many beloved films and TV shows. Over the years, the list of silver screen favorites set in Miami has expanded, but certain classics are synonymous with the Magic City’s infectious vibrancy. Check out this list of the best films and TV shows shot in Miami.

The Birdcage (1996)The open-air mall of Lincoln Road in the heart of Miami Beach is where Nathan Lane and the late Robin Williams take a stroll during a scene in The Birdcage. While the film is full of Miami’s heart and soul (and nightlife), the particularly effervescent moment where Lane and Williams enjoy a romantic walk along Miami Beach’s most notorious shopping street is especially memorable.
Open In Google Maps
Lincoln Road, City Center, Miami Beach, Florida, 33139, USA
Visit Website
Give us feedback 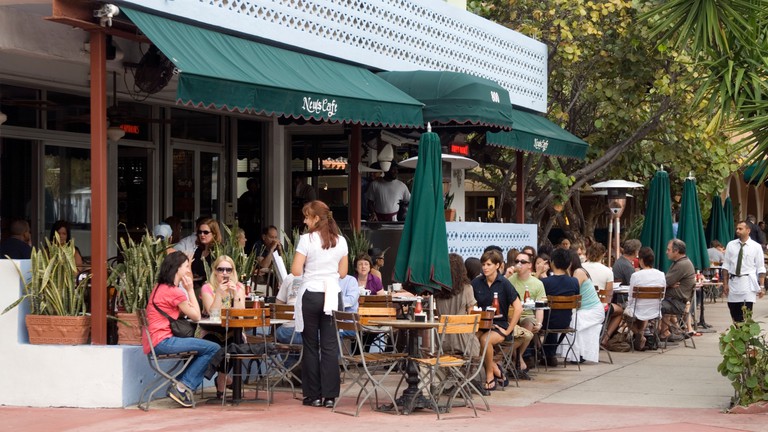 News Cafe on Ocean Drive, Miami, USA | © Alex Segre / Alamy Stock Photo
The Assassination of Gianni Versace (2018)The nostalgic appeal of Miami’s trademark News Cafe takes a dark and shadowy turn in the Assassination of Gianni Versace. A quaint and picturesque 24-hour café that the late Versace himself often frequented, it takes you back to an ’80s era of pink print newspapers and cappuccinos in white china. Part of the miniseries’ explosive appeal is the authenticity of its film locations, featuring pastel backdrops, beachside motels, and the meticulously replicated houseboat where Versace’s murderer, Andrew Cunanan, took his own life.
Open In Google Maps
800 Ocean Drive, South Beach, Miami Beach, Florida, 33139, USA
+13055386397
Give us feedback

View Rooms
Scarface (1983)Scarface was filmed in Florida and California, but the chainsaw scene took place on Ocean Drive in the infamous Miami Beach resident hotspot, Fontainebleau. The film also sees Tony Montana on a payphone on the MacArthur Causeway and features the Fontainebleau Miami Beach – where Tony and Manny would pick up girls by the fancy pool – which now hosts some of Miami’s most glorious day parties. The famous hotel was also used in The Bodyguard (1992) starring Whitney Houston.
More info

Book Now
Bad Boys II (2003)Martin Lawrence and Will Smith reunite as buddy cops in Bad Boys II in a classic Vice City drug-themed film. Replete with car chasing scenes on the MacArthur Causeway and views of Downtown Miami and Biscayne Bay, it also features shots in the Mandarin Oriental on Brickell Key that are key backdrops for the film’s progression. Tapia’s house was filmed at the historic Vizcaya Museum & Gardens – the European-style estate of James Deering. And that $40 million mega-mansion they blew up in the movie? It was a home in Delray Beach, and they blew it up in real life.
Open In Google Maps
3251 South Miami Avenue, Coconut Grove, Miami, Florida, 33129, USA
+13052509133
Visit Website
Visit Facebook page
Give us feedback 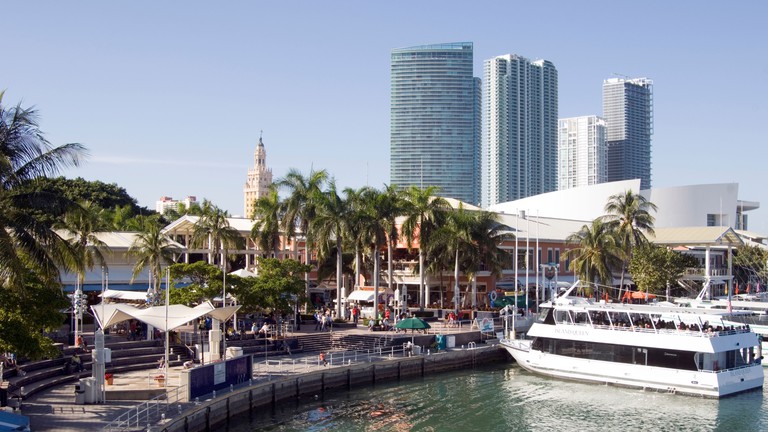 Step Up Revolution (2012)“Miami’s Ocean Drive was transformed today to what some are describing as a public disturbance.” In a scene from the 2012 incarnation of Step Up Revolution, breakdancers stop traffic on Ocean Drive by bouncing off colorful vintage cars and blasting music from stereo speakers. Flanked by Art Deco-style buildings on one side and palm trees on the other, the popular street looks every bit as crowded with traffic on camera as off. The neon-lit Ocean Drive was also used as a location for the first season of the TV series Dexter.
Open In Google Maps
Ocean Drive, South Beach, Miami Beach, Florida, 33139, USA
Give us feedback

There’s Something About Mary (1998)The famous scene in which Cameron Diaz’s character Mary hands out burgers from her bag is filmed at none other than Miami’s Matheson Hammock Park. It’s also the same location where Mary dines with friends at the Red Fish Grill Seafood Restaurant. The scenic park boasts views of Miami’s Brickell and Biscayne Bay, as well as a man-made beach pond in the midst of the park.
Open In Google Maps
9610 Old Cutler Road, Coral Gables, Florida, 33156, USA
+13056655475
Visit Website
Give us feedback
Give us feedback