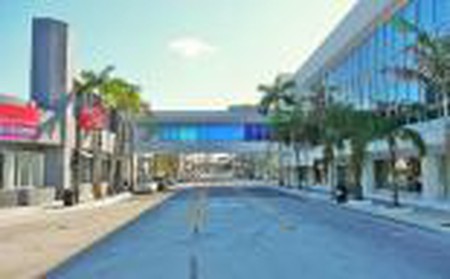 Long known for its historic architecture, and with Art Basel Miami Beach established for over a decade, it is no surprise that Miami, Florida, is a hotspot for contemporary design. The city’s design district has had a meteoric rise to the top of Miami’s art and culture scene. Twenty years ago, the area was a decaying section of Buena Vista; we explore how it became the thriving arts centre it is today. 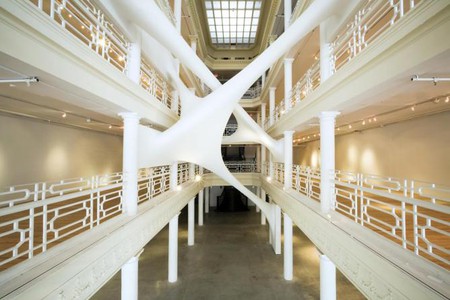 Bordered by Biscayne Boulevard, and tucked in among the Wynwood, Little Haiti and Upper East Side neighbourhoods, Miami’s Design District is largely the brain-child of entrepreneur Craig Robins. Robins, a native of Miami Beach, is the founder and CEO of real estate company Dacra Development. Following his success in the revitalisation of South Beach’s art deco neighbourhood in the early 1990s, Robins turned his focus to what would become the Design District, which lies a 10-15-minute drive from South Beach.

Between Dacra’s investment and the interest of LVMH luxury brands, the neighbourhood has witnessed dramatic growth in recent years. Robins and other investors created a pedestrian friendly environment while simultaneously restoring historic buildings and strategically building new ones, all designed to persuade gallerists and luxury retailers to set up shop. Cultural travellers familiar with South Beach, and in particular the strip of Lincoln Road, will understand the end result Robins hopes to achieve: designer shops such as Louis Vuitton and Christian Louboutin adjacent to trendy, contemporary galleries and gourmet, eclectic cafes. By and large, the plan has worked. 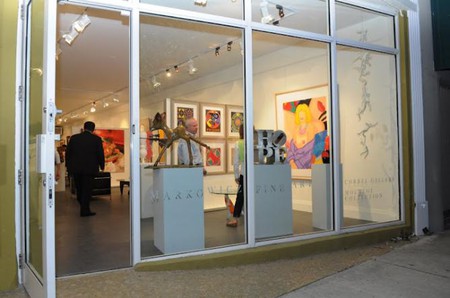 From September through the November, on the third Saturday of every month, the district hosts a site-specific performance series, a night of live performnces which takes place in various different venues throughout the neighbourhood. The lack of commercial pressure fosters many site-specific installations and collaborations between artists. The gallery also sponsors a public art initiative called Art on the Move, in which works by artists such as Liam Gillick are placed on billboards, bus stations and bus backs throughout Miami. Locust Projects is supported in part by funds from The Andy Warhol Foundation for the Visual Arts.

Another art gallery of note in the design district is Markowicz Fine Art. Displaying an impressive array of artists, Markowicz offers artwork from modern masters such as Francis Bacon and contemporary darlings like Damien Hirst. Markowicz showcases street art, digital art, lithography, and other media in addition to tried and true painting and sculpture. Having gained his gallerist credentials at New York’s Opera Gallery, Bernard Markowicz opened Markowicz Fine Art in Miami in 2010. Since the gallery’s opening, Markowicz has built on his client base of well-established artists with exceptional emerging talent in Miami. The French gallerist brings a discerning eye and European taste to the heart of the design district. 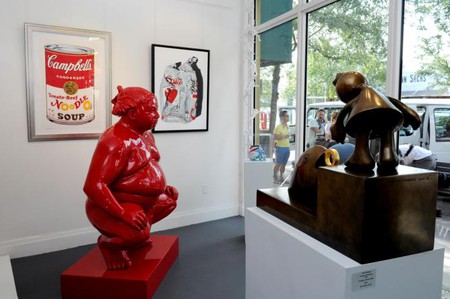 For some sustenance when touring the galleries, visit Michael’s Genuine Food & Drink, located in the heart of the district. Chef Michael Schwartz worked in Philadelphia, New York City and Los Angeles before settling in Miami and opening Michael’s Genuine Food & Drink. Established for seven years now, the neighbourhood bistro offers modern American fare with a strong emphasis on local ingredients. The menu is divided into small, medium, large, extra large portions in addition to sides and a cheese of the week. Enjoy dishes like roasted dayboat fish or crispy sweet and spicy pork belly in the dining room or under the Miami sun in the courtyard. Lunch and dinner entrees are complemented by a craft beer list, specialty cocktails and wine list. Chef Schwartz was awarded the prestigious James Beard Foundation Award for Best Chef: South in 2010 and also operates two other restaurants in the district, Harry’s Pizzeria and The Cypress Room.

Near Michael’s Genuine Food & Drink, one can find Mandolin Aegean Bistro. This Greek and Turkish restaurant has an organic garden in its backyard so ingredients are always fresh. Owners Ahmet Erkaya and Anastasia Koutsioukis founded Mandolin to bring Miami a taste of the food they each grew up with in Turkey and Greece, respectively. The Aegean Sea separates the two countries, giving inspiration to the restaurant’s name, whose cuisine stays true to each culture. The Greek Sampler consists of tzatziki, eggplant purée, and tarama; the Turkish sampler includes hummus, tomato walnut dip and fava bean purée. Other specialties are the stuffed zucchini, village pasta (Greek noodles with ground beef and béchamel sauce), and chicken kebab with orzo pilaf and maroulosalata. Guests are invited to dine al fresco and enjoy the extensive wine menu. This unique restaurant is the perfect fusion of Miami and Mediterranean cultures. 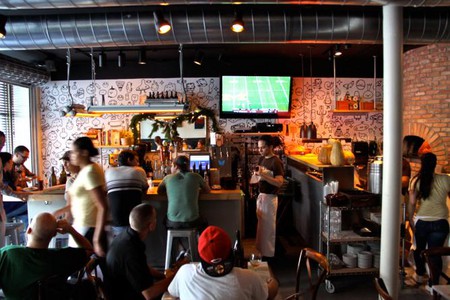 Swampspace is perhaps the antithesis of developer Craig Robins’ vision for the design district and is often referred to by locals as the ‘un-gallery’. Begun by sculptor and fabricator Oliver Sanchez, Swampspace seeks to subvert the commercial model and be more of a happening than a gallery. Sanchez states, “Swampspace is event driven, meaning we do create a scene once a month, and the rest of the time there isn’t the pressure of having this place where people come. They come or they don’t come. I’m not recruiting traffic.” These monthly events have included Lowtide Shopping, a reference to picking up detritus off the beach left by the high tide, and DDoubleVVision, an exhibition of concert photographs and drawings of Miami’s music scene. Swampspace recently moved into a new location at 3940 North Miami Avenue, proving that its un-gallery model may be here to stay, mostly sustained by Sanchez’s successful fabrication studio.

A third design district eatery is the Lemoni Café. The Second Avenue restaurant is an ideal venue for lunch, specialising in paninis and offering other sandwiches, wraps and salads. Panini creations include the Lemoni Supremo—chicken, brie, cherry tomatoes, and homemade pesto—and smoked salmon and caviar, which also includes herb garlic, goat cheese, chives, dill and black pepper. Additionally, the New Miami Times voted Lemoni Café as the home of the best smoothie, and excellent refresher after perusing the galleries and shops of the Design district in the Miami heat. The dessert menu is also tempting, with selections such as the raspberry linzer tart, key-lime pie and vegan cookies. 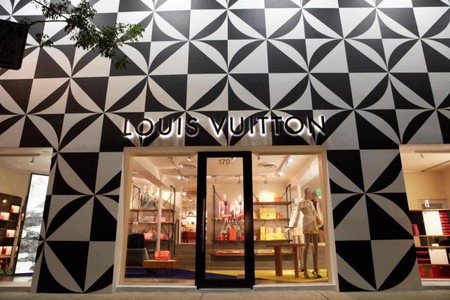 The Future of Miami’s Design District

The future of the design district looks very bright indeed. Luxury retailers Givenchy, Miu Miu, Tom Ford, Marc Jacobs, and Valentino have announced they will be moving in later this year. John Baldessari will be installing a new piece of public art, and renowned architects Sou Fujimoto and Leong Leong will be designing new buildings for the district. Robins and other developers have created a vision of structured, culturally rich growth that attracts tourists, artists and visionary designers alike. Miami’s Design District is a rapidly evolving neighbourhood worth keeping a close eye on, thankfully rescued from an empty future of urban decay.