Head to the northeast coast of Florida and find the historic town of St. Augustine, which claims to be the oldest city in the US. Founded in 1565, St. Augustine plays host to centuries-old historic buildings and Spanish colonial architecture. One of the most historically significant buildings in St. Augustine is the Castillo de San Marcos, a Spanish fort constructed from 1672 to 1695 that has been a key player in the colonial era of wars and struggles as countries around the globe fought for the ‘New World.’

The Castillo de San Marcos, nestled on the shores of St. Augustine’s Matanzas Bay, is a unique, bastion-style fortress that has served as a military post since 1672. Built from an indigenous and semi-rare stone composed of the shells of dead shellfish (called coquina), the Castillo stands today as the only 17th-century military structure in the nation; it’s also the oldest US masonry fortress. Although it has been occupied by various cultures, specifically the Spanish, British, and the US, the Castillo has never been conquered in all of the years of its operation. Many believe its soft and porous stone walls have contributed to this long-lasting fortress. Unlike other stones, coquina has a compressible nature, absorbing the blasts of projectile cannons rather than deflecting; as a result, ammunition gets stuck in the fort walls rather than explode into pieces. The other significant feature is its star-shaped design; modeled after the ‘bastion system,’ a 15th-century Italian military design, the Castillo was built to withstand the changing technologies of New World warfare. 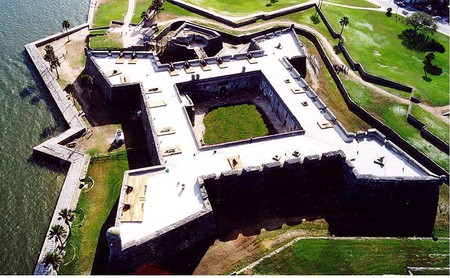 The Beginnings Of The Castillo

Upon the settling of St. Augustine in the mid-16th century, its founder, Pedro Menendez de Aviles of Spain, decided that the city and its port needed protection. Starting construction in 1672, workers retrieved the coquina stone for the walls from Anastasia Island, located just across the bay; the stone was ferried back to St. Augustine where stone masons sent from Havana worked to build the blocks and mix mortar made from baked oyster shells. Block by block, the fort went up 26 feet high, finally completed after 23 years of construction in 1695. It has since gone through a series of improvements and renovations through the course of the varying countries that have occupied it, including raising the walls to 33 feet high as well as additional walls surrounding the city.

A History Of Six Flags

The Spanish kept St. Augustine in its power for quite some time. It wasn’t until 1763 that the British gained the Florida Territory in a trade with Spain, and they were forced to relinquish it; the name of the fort was changed for the first time to Fort St. Marks. The Spanish regained St. Augustine in 1784, reverting the fort back to its original name; however, in 1821, Spain was coerced into giving Florida to the US, upon which it was changed to Fort Marion. At Fort Marion, old storerooms were converted to prison cells, and many Native Americans were held here as prisoners – during the Spanish-American War in 1898, the fort held over 200 prisoners. In 1860, Florida joined other Southern states to form the Confederate States of America, entering the Civil War; however, the fort was given over to the Confederates in 1861. On March 11, 1862, the fort came back into the hands of the Union after a gunboat took the city – forces had evacuated the area, and local authorities surrendered the town without a fight.

By the end of the 19th century, the fort was discontinued as a military base and was named a national monument in 1900; however, it wasn’t until 1942 that the Castillo’s original name was restored. Over the course of its 205-year history, Castillo de San Marcos has flown six different flags. 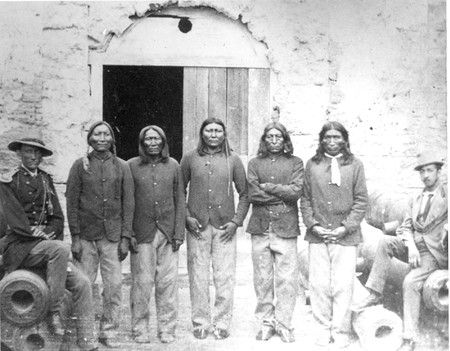