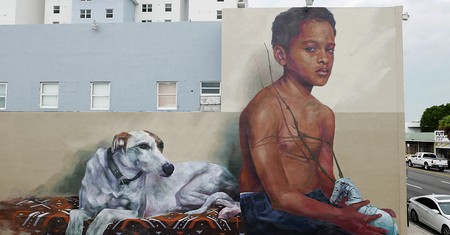 Miami’s colorful diversity pokes out of every corner of the city, right down to the streets, teeming with giant murals, splashed with work ranging from abstract geometric patterns to provocative messages about the threat of rising sea levels. Miami’s street artists don’t shy away from adding bursts of colors to neighborhoods across the city.

While Wynwood tends to get all the credit, street art can be found anywhere in Miami – from Little Havana and Hialeah to South Beach and Allapattah – and with an assortment of subject matters and color palettes.

Miami’s most active street artists leave their mark all over the city, and while their styles are diverse, they’re easy to spot once you’ve gotten a glimpse of their work. Here, we list the top eight Miami street artists whose work you should seek out.

Exuding a quiet intimacy, Evoca 1’s murals are often figurative in nature; sensitive portraits of real and imaginary subjects in moody colors and situations. His street-art name plays on the Spanish word evocar, which means ‘to generate a feeling, a memory or image to the conscious mind.’ With his portraits, Evoca 1 aims to bring a sense of humanity into art, and he largely draws from his own childhood experiences in his native Dominican Republic. Painted with empathy and care, Evoca 1 murals are a departure from much of the city’s mural aesthetic. Many of his artworks can be seen downtown, where the majority of the city’s homeless population seeks respite. 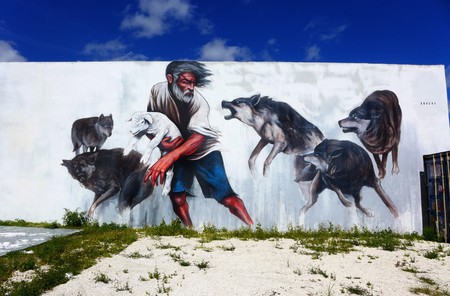 Miami-based artist Ahol Sniffs Glue’s instantly recognizable drowsy-eye motif has colored walls across Miami, and even landed the artist some indie fame when his signature mark was stolen by American Eagle Outfitters for a 2014 campaign. Obliterating the divide between high and low art, Ahol’s eyeballs are a reference to the artist’s views on the monotonous drone of work culture in the United States. Ahol sometimes adds zombie-like personas to his colorful and mesmerizingly repetitive murals, adding to their depth. While his Wynwood street murals made him famous, you can check out his work at various locations across the city. Ahol also sells works to private collectors, so you can also snag your own.

Lebo has managed to fuse classic American cartooning techniques with fine art, developing a singularly identifiable style that pays homage to a number of influences. From pop culture references arising from his native Miami to Egyptian hieroglyphics and indigenous art, Lebo doesn’t shy away from mashing up drawing styles and themes. One of his most recognizable works features a green parakeet – a native Miami species – perched over one of Miami Beach’s lifeguard stands, proclaiming ‘Welcome to Miami Beach.’ The artist has even painted cruise ships, in collaboration with Norwegian Cruise Lines.

A duo comprising Miami artists Andrew Antonaccio and Filio Galvez, 2alas brings an almost digital aesthetic to an analog body of work, and their murals offer the sensation that the images are about to take flight. They are known for their black and white linear portraits and geometric abstractions; the work ranges from unique portraits drawn with their signature linear strokes to collaborations with local landscape designer Paloma Teppa, like the stunning mural found in Brooklyn’s 1 Hotel. Many of their works build upon archived images, fusing vintage allure with a modern, geometric pop. 2alas murals can be found across Wynwood, and frequently draw from the local community. Placed on basketball courts and parking lots, their use of saturated color is a nod to Miami’s verdant landscape.

Painting with a hyper-realist technique and sourcing material from primitivist and hermetic painting styles, Renier Gamboa’s street murals frequently incorporate human and animal forms portrayed in an almost celestial plane. While his works tend to draw from indigenous and historical Latin American or Caribbean influences that equally reflect Miami’s colorful diversity, Gamboa frequently elevates these works into the metaphysical: a Haitian woman’s hair is painted as a free-flowing galaxy; a trove of dancing ballerinas encircle a woman in a dreamlike state. Recently, Gamboa has been deeply involved in Before It’s Too Late, an organization driving awareness of the effects of climate change in Miami with murals and technological interventions.

ABSTRK builds upon a timeless graffiti style with figurative and abstract geometric elements, creating hyper-realistic portraits rich with texture and glistening with life. Incredibly diverse in subject matter and format, his work showcases the range of his talent. The Cuban-American artist frequently paints the outlines and letter structure typical to graffiti, but eyeballs and portraits of women are recurring motifs. One of his more recognizable murals – a portrait of Miami fashion blogger and cancer survivor Angeles Almuna, located in the Miami Design District – reminds us to take things one day at a time.

Haitian-born, Miami-based artist Serge Toussaint’s historically influenced murals can be seen all over Miami, but particularly in Little Haiti, where the artist aims to shine a light on the Haitian culture’s contributions to the city. He depicts the pain and suffering of the Haitian community, but tends to uplift these pieces with a hopeful glance toward the future. All of his murals aim to tell a story, with the most iconic being a portrait of Barack Obama and Martin Luther King, entitled The Dream Team. According to Toussaint, this Miami mural was inspired by what he perceived to be King’s dream realized, in the form of a black president of the United States. Toussaint occasionally dabbles in street signs, with recognizable products or local businesses taking center stage.

Hoxxoh’s psychedelic murals are designed to inspire a different way of viewing time. Alarmed by the pace of the contemporary world, hanging on a balance of likes and stock market ups and downs, Hoxxoh paints murals you might easily get lost in. Creating optical illusions with bright hues and shapes, Hoxxoh’s work seems to pull you in, contemplating gravity’s natural pull. He aims to remind viewers that time is a pulsing energy, a precious gift meant to be used wisely and mindfully. Hoxxoh is regularly commissioned for murals around Miami – you can catch his work in tennis courts in Bay Harbour, on buildings in Hollywood or walls around Wynwood.