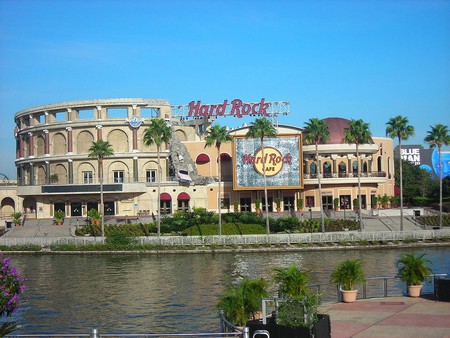 There are many great places to see live musical performances throughout Orlando, Florida, ranging from intimate venues that accommodate just a few hundred people to full-fledged stadium-sized concerts for tens of thousands of fans. Here we touch on the 13 best concert venues in the city; try to catch a show while you’re in town!

The Hard Rock Live in the CityWalk complex at Universal Orlando Resort™ is one of the best venues for seeing a concert in the city. Orlando’s “Coliseum of Rock” hosts musical acts of all genres from all over the world as well as live comedy shows. The auditorium is attached to the largest Hard Rock Cafe in the world, and it can accommodate up to 3,000 concert-goers. 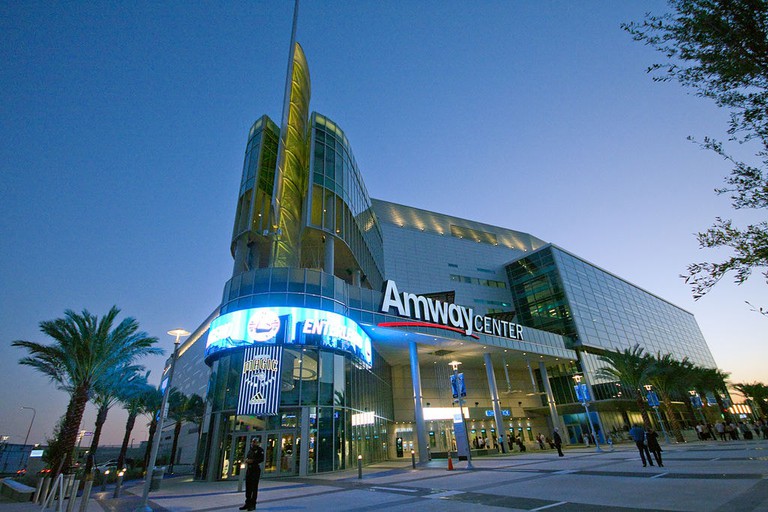 Amway Center | © Ray Villalobos/WikiCommons
The home of the NBA’s Orlando Magic also serves as a 20,000-seat arena for large-scale musical performances. The Amway Center, located near the heart of downtown Orlando, is unmistakable as a striking piece of modern architecture. The venue hosts music acts of every genre and boasts state-of-the-art lighting and sound equipment for putting on a big show.
Open In Google Maps
Suite 200, 400 West Church Street, Parramore, Orlando, Florida, 32801, USA
+14074407900
Visit Website
Give us feedback

Concert Hall
Facebook
Email
Twitter
Pinterest
Copy link
Share
Map View
The Social is a local favorite for seeing indie musical acts from all over the world, as well as comedy shows and other special performances, on a nightly basis. The brick-walled venue is your typical concert hall that’s big enough for a few hundred standing fans to enjoy a show, and it’s home to the nation’s longest-running Acid Jazz/Indy Hip-Hop weekly.
Open In Google Maps
54 North Orange Avenue, Central Business District, Orlando, Florida, 32801, USA
+14076488363
Visit Website
Give us feedback

Since 2002, BackBooth has been hosting local and national musical acts at its downtown Orlando location on a near-nightly basis. BackBooth is a spacious venue, able to accommodate 350 guests, with an Old English, pub-style interior that also hosts comics, art shows, and dance parties on nights a concert isn’t scheduled. 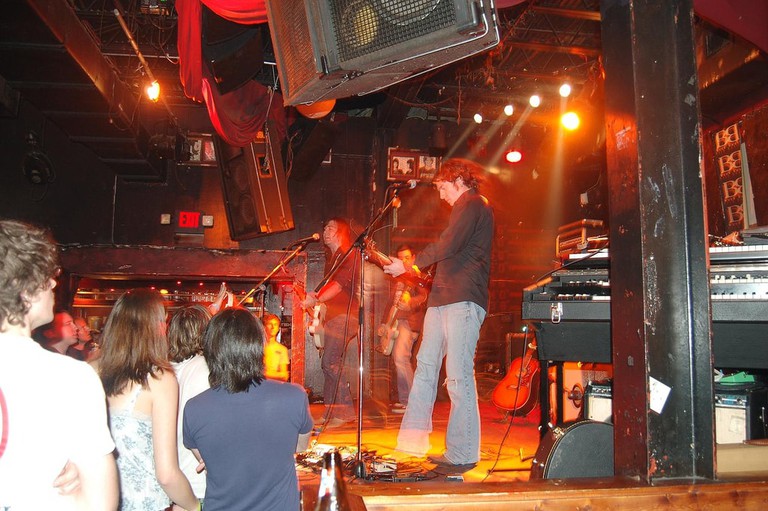 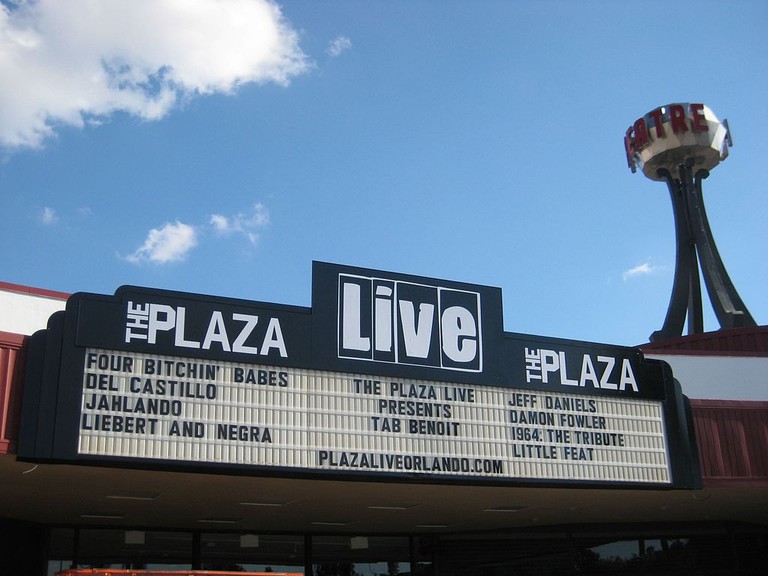 The Plaza Live | © JerricaSchwartz / WikiCommons
One of Orlando’s oldest theaters is one of the best venues to see a concert in the city. The Plaza Live, originally a cinema and theater space, offers two different halls for acts of various sizes, which have ranged from local bands to national talent. The theater, also known as “The Rocking Chair Theater” and currently owned by the Orlando Philharmonic Orchestra, remains a favorite venue among the locals to see comedians and musicians.
Open In Google Maps
425 North Bumby Avenue, Northeast Orlando, Orlando, Florida, 32803, USA
+14072281220
Visit Website
Give us feedback 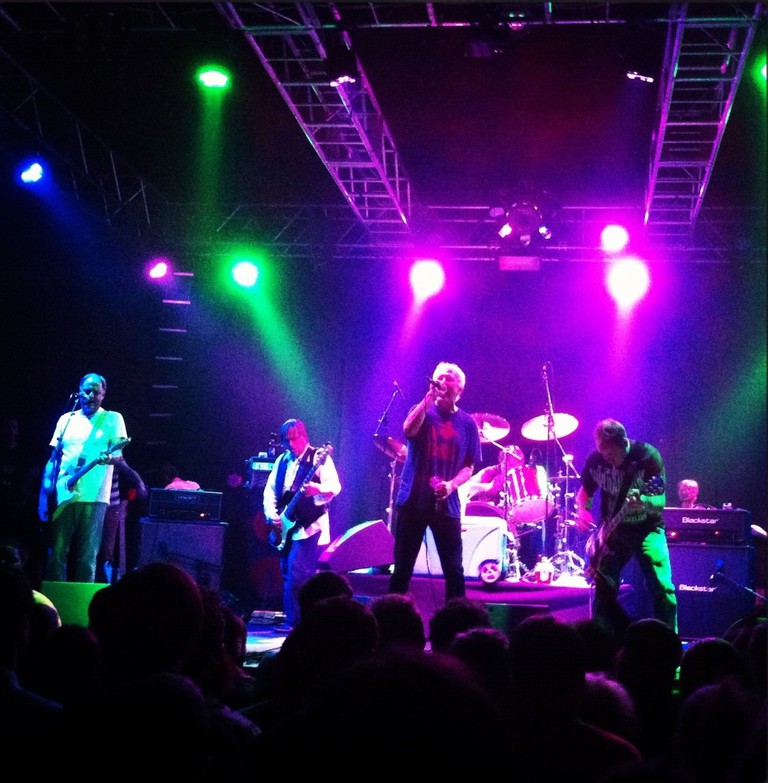 Guided by Voices at The Beacham | © Mindy Hertzon / Flickr
The Beacham started out as a cinema theater, built in 1921, and since then, it has become one of the best places to see a concert in downtown Orlando. The local landmark is a cultural icon and has a long history hosting a variety of musical acts from all over the world, including Ray Charles, The Police, Pink, Slayer, The Ramones, and others. When a concert isn’t scheduled, The Beacham transforms into a late-night dance hall.
Open In Google Maps
46 North Orange Avenue, Central Business District, Orlando, Florida, 32801, USA
+14076488363
Visit Website
Give us feedback

Bombshell’s Tavern is one of Orlando’s go-to venues for local musicians looking for a gig. It can accommodate up to 450 concertgoers and offers an extensive beer selection, billiard games, and karaoke on off-nights.

Cheers to 2017 and all the shows it gave us! We'd love to hear about your favorite at the arts center.

Will’s Pub is a low-key space that’s a favorite among locals for its extensive selection of international beer, including more than 16 craft beers on tap, billiards, and live music scene. The venue plays host to local and international acts to the delight of locals and traveling fans alike.

Thank you all for another wonderful year at Will’s. Last night ruled! Thanks to Tyler Whicher for the pic. Will’s and Indie’s are closed today. Happy New Year!

Bar, Wine, Beer, Cocktails, American
Facebook
Email
Twitter
Pinterest
Copy link
Share
Map View
Since 1989, Tanqueray’s has been providing a space for local musicians to play in its unique, underground location: the cellar of the old Metcalfe Building in downtown Orlando. Today, it’s one of the few bars in town where you can catch a live band every night of the week.
Open In Google Maps
100 South Orange Avenue, Central Business District, Orlando, Florida, 32801, USA
+14076498540
Give us feedback

Nightclub, Wine, Beer, Cocktails, Pub Grub, 0
Facebook
Email
Twitter
Pinterest
Copy link
Share
Formerly known as the Firestone Live, Venue 578 is a music venue that was once a tire store, and the spacious interior is perfect for seeing a live concert or other special events. Venue 578 hosts a range of talents, ranging from hip-hop to rock bands and country music to electronic parties.
Open In Google Maps
Give us feedback
Give us feedback