10 Films to Make You Fall in Love with Miami 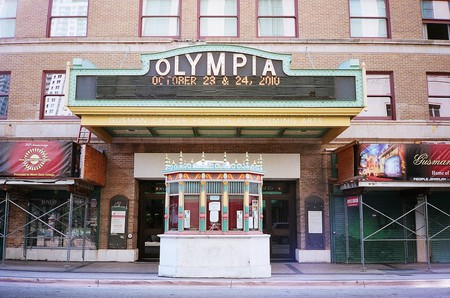 There are some truly beautiful films about Miami, as well as some high-action, suspenseful ones that use Miami as its racy backdrop. Whether comedy, thriller, or drama, these 10 films shot in Miami perfectly capture its beauty.

This gorgeous drama about a homosexual man growing up in Miami depicts the glamour of Miami like other movies do, but it does more than that. Sure, Miami has beautiful beaches, but Moonlight gives an intimate, truthful look at areas of Miami that are less fortunate, and does not shy away from keeping things honest. We also see scenes of Chiron going to the beach at night, as well as visiting his lover at a diner, which is actually Jimmy’s Eastside Diner in Upper Eastside. Moonlight stands apart from other films for showing smaller areas of Miami that are just as beautiful, without having to lean on the glitz of areas like Bal Harbour and Ocean Drive.

This movie is an adaptation of the TV series with the same name. It’s a thriller that features scenes shot at Mansion nightclub, an old nightclub that has since closed. We also get to see shots of the Dodge and Fisher Islands, as well as the Brickell area, and the Miami Beach Marina. There are several great night scenes that highlight how beautiful Miami looks lit up once the sun goes down, especially the downtown area.

This strange film about a man who lands on the moon, which is inhabited by naked women, is one of eight nudist films from director Doris Wishman. Many scenes were shot at Coral Castle in Homestead, one of South Florida’s most magical wonders. The story goes that a Latvian man named Ed ended up moving to Florida to build a limestone structure for the love of his life, who ended their engagement the day before they were to get married. The site is a masterpiece, with coral structures of all different shapes and sizes, including moons, hearts, and even rotating pieces.

If you’re looking for the classic Miami landmarks, this is the movie for you. Scarface highlights some of Miami’s most recognizable spots, like Ocean and 13th, where many Art Deco buildings stand. The apartment building where the chainsaw scene happens is currently a Johnny Rocket’s on Ocean Drive, right near the Colony Hotel. If you’re a sucker for Art Deco architecture, you’ll love Scarface, and you’ll also love it if you’re one to marvel at the beauty of Miami’s high-end hotels. The infamous Fontainebleau Hotel was also a filming location for the movie, which highlights Miami’s stereotypical glitz and glamour.

This movie is perfect for anyone who loves watching dancing competitions and routines but wants to see these to a Miami backdrop. Viewers can see shots of Ocean Drive and downtown Miami, and specific locations like Lincoln Road parking garage or the wall at the New World Symphony. We also get some views of the Miami River and the American Airlines Arena, two Miami landmarks. Aside from recognizing glamorous parts of Miami’s landscape, we also get to see incredible dance performances, where dancers interact with different environments in Miami, from traffic on Ocean Drive to fancy hotels.

This film beautifully highlights Miami’s Art Deco District, an area of the city that’s really distinct from others, and that dates back to 1923-1943. The “Birdcage Club” in the film is actually The Carlyle on Ocean Drive, a hotel that boasts an amazing view of the Atlantic Ocean, and a long history. The hotel, built in 1939, has barely changed since its early days, and was also the shooting location for movies like Bad Boys 2, Random Hearts, and Scarface. Watching this film will make you appreciate Miami’s Art Deco District.

If you’re looking for a film that definitely steps out of the box, watch this Bollywood film about two Indian men in Miami who convince each other to act as a gay couple to get close to a woman they both like. This film captures some of Miami’s most beautiful spots like the Vizcaya Museum and Gardens, the Art Deco District, and Crandon Park. Set to Bollywood sounds, this collage of Indian culture and Miami’s landscape makes for a fun film.

This thrilling film features scenes with insane stunt drivers racing through different areas of Miami, including the area in front of Bayside Marketplace, heading to Downtown Miami. They pass the Freedom Tower and New World Tower, as well as the American Airlines Arena. As the drivers pass these landmarks, viewers get a nice glimpse of how Miami looks at night, all lit up with twinkling lights and buildings that glow different colors. Drivers pass over the South Miami Avenue Bridge, the same one seen in several episodes of Miami Vice. Watching this film will make you want to rent a car and go for a joyride in Miami, too.

This rom-com features many Miami spots, like the Big Pink Diner, south of Miami’s Art Deco District, heading towards South Pointe. It also features the Miami-Dade Cultural Center in Downtown Miami, and we get a nice look at the Brickell Key Causeway. The Cardozo is also featured, which is one of Miami’s oceanfront hotels located on Ocean Drive, and is a beautiful luxurious Art Deco hotel. You’ll definitely want to book a trip after watching this film.