Where To Get The Best White Clam Pizza In New Haven, Connecticut

The city of New Haven, Connecticut is probably best known as the home of Yale University, one of the world’s top universities. But the quaint city has another albeit lesser-known bragging point: it’s where the white clam pizza originated. Here’s where to find New Haven’s best white clam pizzas. 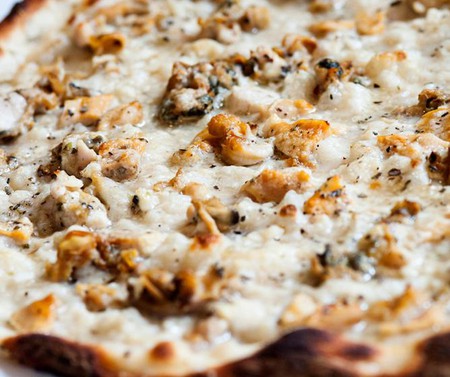 Famed as one of the oldest pizzerias in America, Frank Pepe Pizzeria Napoletana, Pepe’s for short, continues to thrive as one of the greatest pizza innovators. Located in Wooster Square, also known as the ‘Little Italy’ of New Haven, Pepe’s maintains the pivotal role as the source of where ‘apizzas’ (New Haven-style thin crust pizzas) originated. It is also known as the original home of the White Clam Pizza, which founder Frank Pepe created from the restaurant’s appetisers of raw little neck clams. Over time, it became popular, especially at Pepe’s, and still remains a pizza staple.

Restaurant, Italian, $$$
Facebook
Email
Twitter
Pinterest
Copy link
Share
Map View
As an influential contributor to the pizza culture, Modern Apizza has built its status as one of the best pizzerias in Connecticut. What differentiates Modern from other pizzerias in Wooster Square is that the chefs bake their pizzas in an oil-fueled brick oven rather than a coal-fired brick oven. Using their unique cooking technique, Modern creates their famous ‘Clams Casino’ pizza, a variation from the original White Clam Pizza, and the Italian Bomb, a classic Italian variation. Due to their popularity, Travel Channel decided to feature the restaurant in the show called Man v. Food Nation.
Open In Google Maps
874 State Street, East Rock, New Haven, Connecticut, 6511, USA
+12037765306
Visit Website
Give us feedback

Home of a wood-fired oven imported from Italy, Da Legna attracts both locals as well as visitors to taste their vast assortments of thin crust artisanal pizzas, particularly their variation of the famous White Clam pizza. What makes Da Legna’s pizzas special are two key factors: the oven, chef Dan Parillo’s cooking skills and craft and Dave Foster’s creativity and technique. Using only the finest ingredients, Chef Parillo cooks with over 25 years of experience over the oven as Dave Foster creates an original series of small plates and salads to add to the menu. Combined together, the three components create fresh full-course meals that consist of fresh pizza options, appetisers, complimentary dishes and desserts.

Restaurant, Italian, Vegetarian, $$$
Facebook
Email
Twitter
Pinterest
Copy link
Share
Map View
One of the most renowned pizzerias in the nation, Sally’s Apizza is a quaint pizza joint founded by Salvatore Consiglio, nephew of Frank Pepe. Since its establishment, the family has made every pizza dish individually by hand and baked using the same coal-fired oven. To this day, the restaurant still serves one of the best thin crust pizzas, especially their clam pizzas, in the country. As proof of Sally’s popularity as well as quality, Sally’s proudly displays photos of celebrities and significant public figures, such as Bill Clinton and Kathleen Turner, who had travelled far distances just to taste the rumoured best pizza ever created.
Open In Google Maps
237 Wooster Street, Wooster Square, New Haven, Connecticut, 6511, USA
+12036245271
Visit Website
Give us feedback 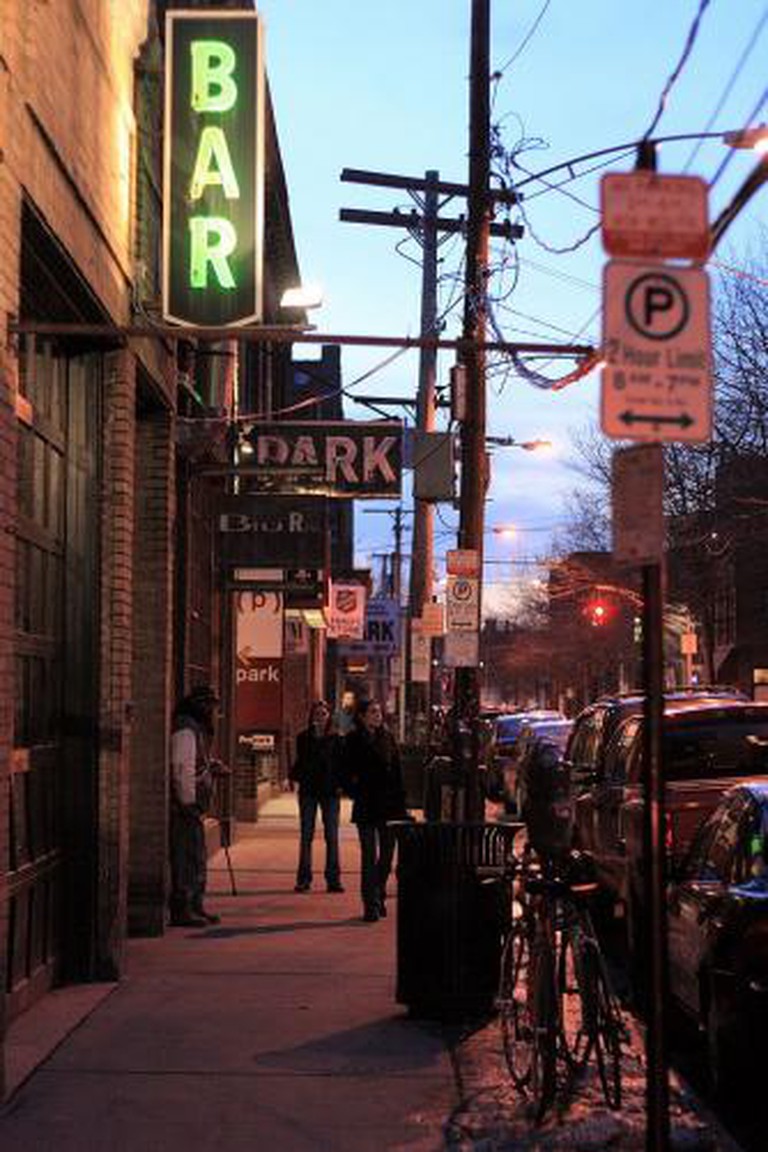 Brazi's Italian Restaurant, New Haven | © Ragesoss/WikiCommons
Brazi’s Italian Restaurant is located in the same complex as Long Wharf Theatre, unfortunately invisible to the general public. Most customers dine here during lunch and dinner hours during which Brazi’s serves a vast range of classic Italian specialties from baked pepperoni rolls to veal and pork chops to pasta to pizza. Though they do serve Clams Casino, a specialty pizza derived from the White Clam pizza, Brazi’s is more known for its special Brazi’s style calamari. In addition to its calamari, the restaurant is acknowledged for its interior design similar to that of an antique banquet hall, giving off a 1980s feel to the dining area.
Open In Google Maps
201 Food Terminal Plaza, Long Wharf, New Haven, Connecticut, 6511, USA
+12034982488
Visit Website
Give us feedback

Bar, Restaurant, Nightclub, Italian, $$$
Facebook
Email
Twitter
Pinterest
Copy link
Share
Map View
A bar, restaurant and nightclub, BAR is a new pizza powerhouse in New Haven. Customers praise BAR for its thin crust pizzas, especially the clam pizza and the most popular white mashed potato bacon pizza. Not only is the restaurant known for its high quality pizzas, but also it is admired for its unique architectural structure. Designed to create a relaxed yet lively environment, the interior consists of four compartments: the BruRm, where BAR makes pizza and serves beer; the front room, where large groups play pool and gather around long tables; the lounge, where families and dates eat peacefully; and the Bartropolis Dance Floor in the back of the restaurant, where the space is reserved for nightclubbing and dancing.
Open In Google Maps
254 Crown Street, Downtown, New Haven, Connecticut, 6511, USA
+12034958924
Visit Website
Give us feedback 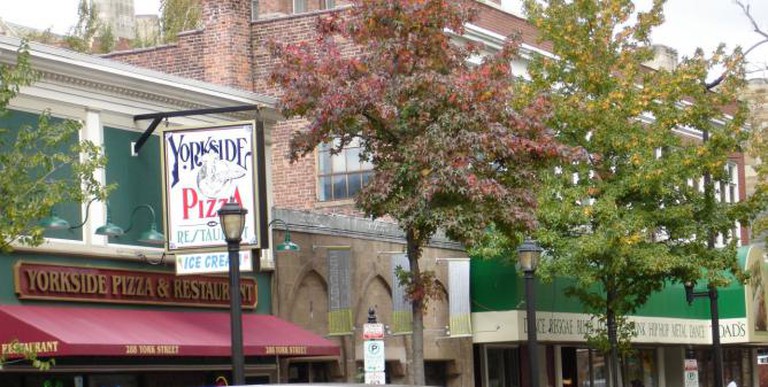 Yorkside Pizza & Restaurant, New Haven | © Step/Flickr
One of Yale students’ favourite places to eat, Yorkside Pizza and Restaurant is a family run pizzeria that has served the New Haven and Yale community for decades. The Koutroumanis family, owners of the restaurant, prepare their specialty dishes, pizzas, and soup from scratch using fresh, raw ingredients according to their original family-made recipes. The cook even makes salad dressings, dough and sauces fresh on a daily basis. As a golden rule, the family provides the best quality of food with the most generous servings at reasonable prices. As a result, many Yale students take advantage of the great deals.
Open In Google Maps
288 York Street, Downtown, New Haven, Connecticut, 6511, USA
+12037877471
Visit Website
Give us feedback

Pizzeria, Restaurant, Italian, $$$
Facebook
Email
Twitter
Pinterest
Copy link
Share
Map View
An underappreciated pizzeria of New Haven, Dayton Street Apizza is located on Dayton Street, an unusual location compared to the crowd of pizzerias in Wooster Square. Though separated physically from the plaza of densely concentrated competition, the restaurant is still acknowledged as a contestant in the New Haven pizza war for the title of the best pizzeria in the city. Reviews from the New Haven Advocatedetermine that the reign of the three powerhouses – Pepe’s, Sally’s, and Modern – have come to an end and that there is ‘a new pizza joint in New Haven that is just as good’. Additionally, reviews from the Connecticut Magazine claim that Dayton’s serves one of Connecticut’s best pies, especially the white clam pie.
Open In Google Maps
60 Dayton Street, Amity, New Haven, Connecticut, 6515, USA
+12033892454
Visit Website
Give us feedback

Restaurant, Seafood, $$$
Facebook
Email
Twitter
Pinterest
Copy link
Share
Map View
Open late at night, Alpha Delta Pizza is the most popular midnight snacking place for Yale students, especially during midterm season and finals week. Though it does serve a variation of the famous White Clam pizza, Alpha Delta is actually not known for its pizza specialties. For the Yale community, the definition of the restaurant is described with one word: Wenzel. This invention is a legendary sandwich of indescribable flavours that is integral to the Yale experience. With the recent development of the One Button Wenzel app, which places orders via Smartphone for wenzel delivery, students have easier access to a wenzel and can experience a world of flavours anywhere at any time throughout the night.
Open In Google Maps
371 Elm Street, Dwight, New Haven, Connecticut, 6511, USA
+12037873333
Visit Website
Give us feedback

Restaurant, Greek
Facebook
Email
Twitter
Pinterest
Copy link
Share
Map View
Town Pizza Restaurant is a small pizzeria that has been involved with the Yale and New Haven communities for several decades. Though it is not as well-known or praised as powerhouse pizzerias, it is still a popular New Haven pizza joint that serves thin crust pizzas with ample amount of toppings in ratio to the crust. Most customers dine at Town Pizza for its New Haven style pies, particularly the clam pie or pizza, calzones and some Greek dishes. With delectable meals at an affordable price, Town Pizza Restaurant is an excellent choice for a quick and casual lunch or dinner.
Open In Google Maps
25 Whitney Avenue, Downtown, New Haven, Connecticut, 6510, USA
+12038656065
Visit Website
Give us feedback
Give us feedback