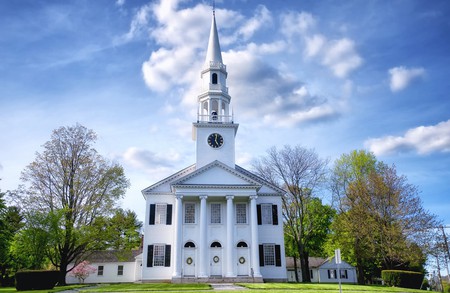 If you’re missing Gilmore Girls and its revival season, rest assured that there’s still more you can do to get your fix. Grab a friend, or your mom, and go for a road trip down memory lane. Here’s a DIY tour of Connecticut—Gilmore Girls style.

Start at the Mayflower Inn, where Amy Sherman-Palladino first stayed while visiting Washington, Connecticut. It’s also where she began to get her inspiration for the TV show. After exploring Connecticut, she brought a lot of ideas that replicated the feel of the New England towns back to L.A., where she began writing the television show. She kept picturing absurd characters within the quaint town shops and squares, leading to many of the characters we love today.

While the Mayflower Inn is certainly a more extravagant version of the Dragonfly Inn, be sure to spend time on the porch and in the reading room to see echoes of where Sherman-Palladino must have gained her inspiration. You’ll also need to stop in the Washington Food Market, which gives off Doose’s Market vibes.

The grass is always greener at Grace Mayflower. 💚#travel #jprjetset

The next town on the list is New Milford, Connecticut. If you stayed over at the Mayflower Inn or are getting an early start, you must stop in at Theo’s Downtown Diner, which you might just forget isn’t actually Luke’s Diner! The downtown also has a gazebo in the middle of its town green and a street with shops that feels reminiscent of the one in Stars Hollow. Walk around into the evening to see the street lights all lit up, and be sure to drive by the campus of the nearby Canterbury School, which some fans think looks similar to Chilton.

Spend your Saturday night at the Cornwall Inn, which feels very similar to Lorelai’s Dragonfly Inn. In the morning, walk around the cute downtown area, where gift shops, a drug store, coffee shop, bakery, and bookstore all give off that small-town magical feeling. If you’re lucky enough to see Kent during the winter months, you might feel just like Lorelai: “Everything’s magical when it snows, everything looks pretty.”

The next stop is in Litchfield, Connecticut. Stop into Bradford House Antiques and feel just like Mrs. Kim or Emily Gilmore as you roam the shelves. Litchfield is a haven for antique lovers! Step back in time and practice your haggling skills just as Mrs. Kim would.

If you remember, there was a time when Luke lived in Litchfield, Connecticut; in one episode, he tells Lorelei that he moved there with his soon-to-be ex-wife, Nicole. Though Litchfield’s town center is not as populated as Stars Hollow’s was (thanks to all those extras), the storefronts are well decorated and quaint and give off a very New England small-town vibe. If you have time for dinner, enjoy the fine dining at West Street Grille, which may give off reminiscent vibes of when Christopher and Lorelai spent time in Paris.

While in Guilford, be sure to stop at The Village Chocolatier, a shop that has an uncanny resemblance to Taylor’s Old-Fashioned Soda Shoppe. Be sure to get some ice cream or chocolate for the road home, and look out for a tall man in a striped shirt with a top hat. (He’s often complaining about something.) Later, walk down the shop-filled Whitfield Street, and peer into the shops that look quite similar to Stars Hollow. Page Hardware is a cute one, and the Guilford Food Center could be Doose’s Market.

today was the annual "spend $300 on chocolate" with my dad day.. this tradition has been going on since I was little & I didn't think it could be any better.. But this year @stevedepino attended our shopping excursion around town. Expectations exceeded.