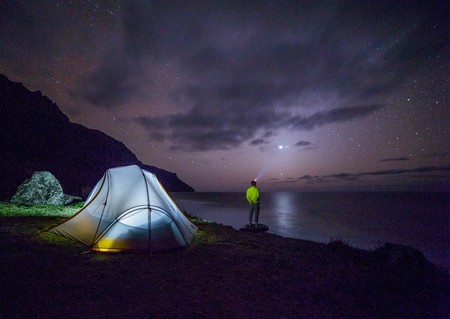 The National Sleep Foundation reports that 57% of women and 51% of men struggle with insomnia at least a few nights per week. Now researchers think the key to healthy sleep patterns is as simple as getting back to basics and into the great outdoors.

As modern life continues to revolve around screens that emit melatonin-disrupting blue light, our sleep cycles are suffering. To find out just how much, Kenneth Wright, director of the sleep and chronobiology lab at the University of Colorado in Boulder, sent a team of researchers into the Rocky Mountains for six days.

Without any access to artificial light from either phones or flash lights, the campers became more attuned to the sun, going to bed 2.5 hours earlier than normal and clocking up a solid 10 hours of sleep, compared to their usual 7.5. In the day time they were a lot more active and received 13 times the amount of sunlight exposure they would have back in the city.

After returning from the trip levels of melatonin (the sleep hormone) in the camper’s bodies was monitored throughout the day. The researchers found it started to rise 2.5 hours earlier than it had before they had departed, showing their circadian clocks had naturally, quickly adjusted to the light-dark cycle of nature.

Although it was only a small study, other researchers have backed the results as worthy of exploration.

“This should inspire people to look at all of the environmental factors that affect sleep rather than looking at the internal biological factors. There are some people who say ‘I can’t go to sleep early because I’m a late type, it’s in my genes’. But it’s exposure to artificial light that drives our clock later so we struggle to get out of bed in the morning,” Derk-Jan Dijk, director of the Sleep Lab at the University of Surrey, told The Guardian.

“I don’t think the take home from this study should be ‘let’s go camping’. We should look carefully at the environment in our homes and our bedrooms, at the light and temperature in the evening, and see how that affects our decision to go to sleep,” Dijk said.