The Most Impressive Buildings in Denver 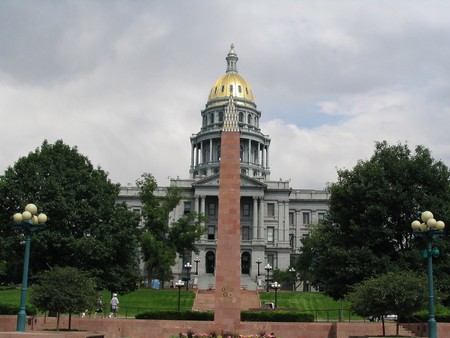 Denver’s architecture is a reflection of the city’s sense of independence and growth from a small cow-town in the middle of nowhere to a vibrant urban hub. It’s this spirit of perseverance and ingenuity that can be seen in the evolution or architectural styles and functional aesthetic in many of Denver’s most treasured buildings. This is also what makes Denver’s so special and beloved by its residents. Here are some of Denver’s most impressive buildings.

Hotel
Facebook
Email
Twitter
Pinterest
Copy link
Share
Map View
Built in 1881 and opened in 1894, Denver’s Union Station was designed by D.H. Burnham & Co as a Beaux Arts-style transportation hub. The building has gone through a few renovations over the years, most recently in 2012, but still retains many of its classical features, including terazzo floors and a Columbine motif on the borders of the interior. While Union Station is still a transportation hub today, the building has been repurposed and is now also the lobby for the Crawford Hotel, as well as a retail and dining center with several shops and chef-driven restaurants.
Open In Google Maps
LoDo, Denver, Colorado, 80202, USA
Visit Website
Give us feedback 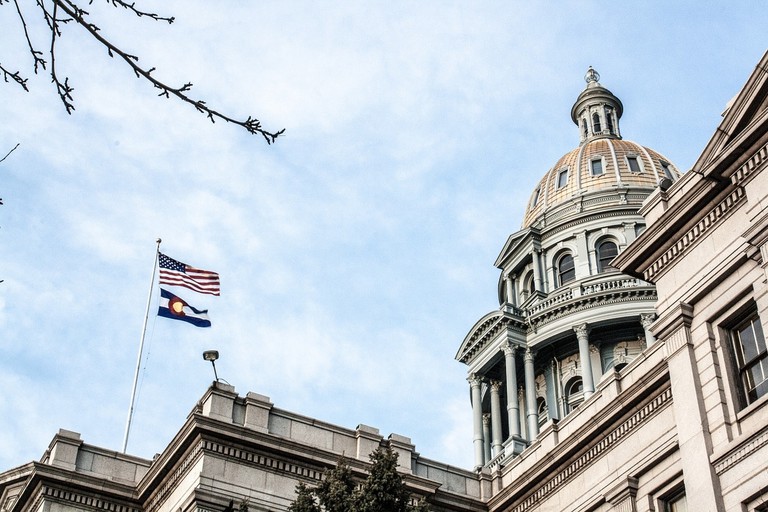 The Colorado State Capitol,designed by Elijah E. Myers and built in 1894, was meant to mimic the look of our nation’s capitol. Its most impressive feature is perhaps the dome, constructed out of copper panels gilded with gold leaf taken from a Colorado mine, which stands as a symbol of the Colorado gold rush. The inside of the building is decorated with rose onyx, also mined in Colorado. Guests can also visit a mile marker on the front steps that show where the city stands at exactly one mile above sea level.
Open In Google Maps
200 East Colfax Avenue, Central, Denver, Colorado, 80203, USA
+13038662604
Visit Website
Give us feedback 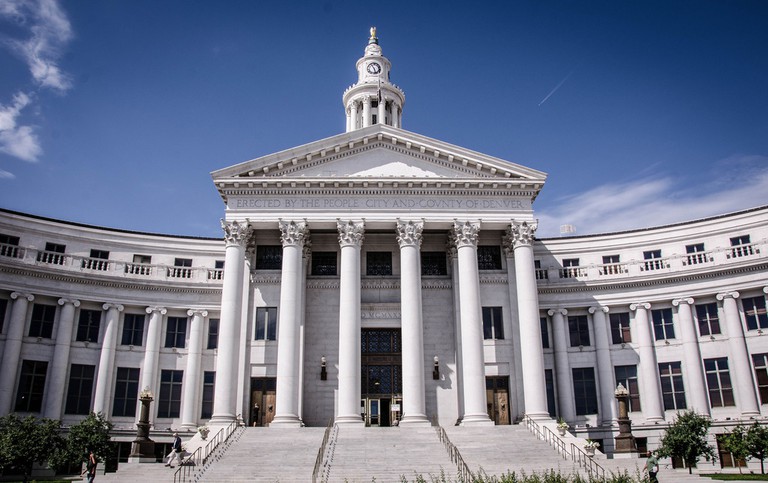 City and County Building | (c) Kevin Galens/Flickr
Denver’s City and County building, home to the City and County of Denver, was completed in 1932 and is a stunning Neoclassical building that has long stood as the government and cultural center of the city. It was the cornerstone of Edward H. Bennett’s 1917 master plan for the whole Civic Center, an area with a park, fountains, statues, gardens, and even a Greek amphitheater, all in a Neoclassical design. The building serves as the center for this Greek-inspired paradise in the center of the city.
Open In Google Maps
rm 451, 1437 Bannock Street, Civic Center, Denver, Colorado, 80202, USA
+17203372000
Visit Website
Give us feedback

Cathedral Basilica of the Immaculate Conception

Cathedral Basilica of the Immaculate Conception was completed in 1911 and designed by the architects Leon Coquard, Aaron Gove, and Thomas Walsh. The cathedral is a relic of the French Gothic style, like many of the great European cathedrals, with all the signature touches. Expect to see vaulted ceilings, flying buttresses, and even a few gargoyles. The east spire has 15 bells, rung for all Sunday Masses and on special occasions. The church also contains some 75 stained glass windows, originally crafted at the Royal Bavarian Art Institute in Munich, Germany. 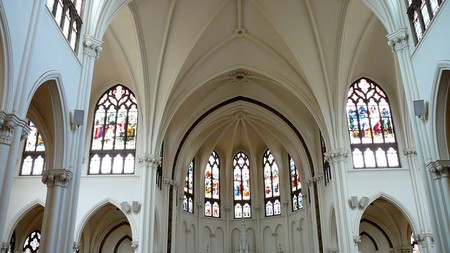 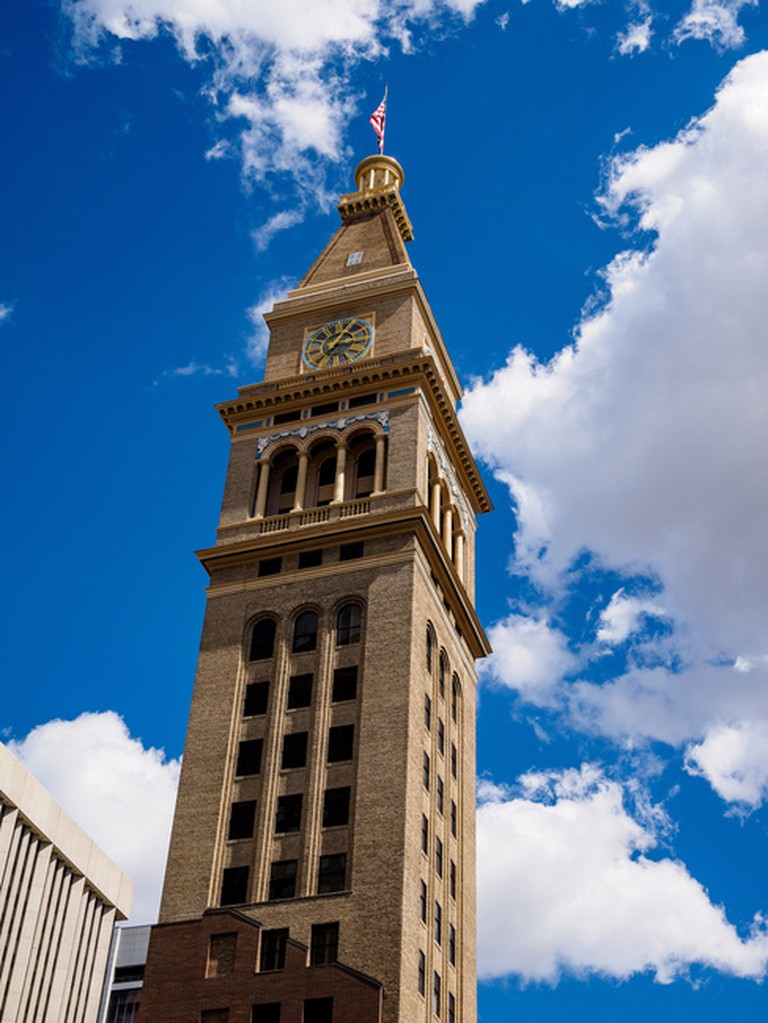 Clock tower | (c) Melissa Johnson/Flickr
The D&F Clock Tower, located on the 16th Street Mal,l is a bit of an oddity. Designed by architect F. G. Sterner, when it was built in 1911, the D&F Tower was the tallest structure west of the Mississippi, at 393 feet. The tower was constructed in the Italian Renaissance style of brick, stone, and terracotta, as part of the Daniels and Fisher department store. Today, the clock tower is a historic landmark and event center that still lights up the Denver skyline every night.
Open In Google Maps
1601 Arapahoe Street, Central Business District, Denver, Colorado, 80202, USA
+13038770742
Visit Website
Give us feedback

Book Now
The Frederic C. Hamilton Building is the 2006 addition to the Denver Art Museum, designed by Daniel Libeskind. The building itself is a work of art, metallic and asymmetrical, with jutting angles just asking to be explored both inside and out. The exterior is covered in some 9,000 titanium panels that catch the glare of the sun. Inside, visitors will find plenty of nooks and crannies created by the angular design, where art exhibits are frequently placed.
Open In Google Maps
100 West 14th Avenue Parkway, Civic Center, Denver, Colorado, 80204, USA
+17208655000
Visit Website
Give us feedback 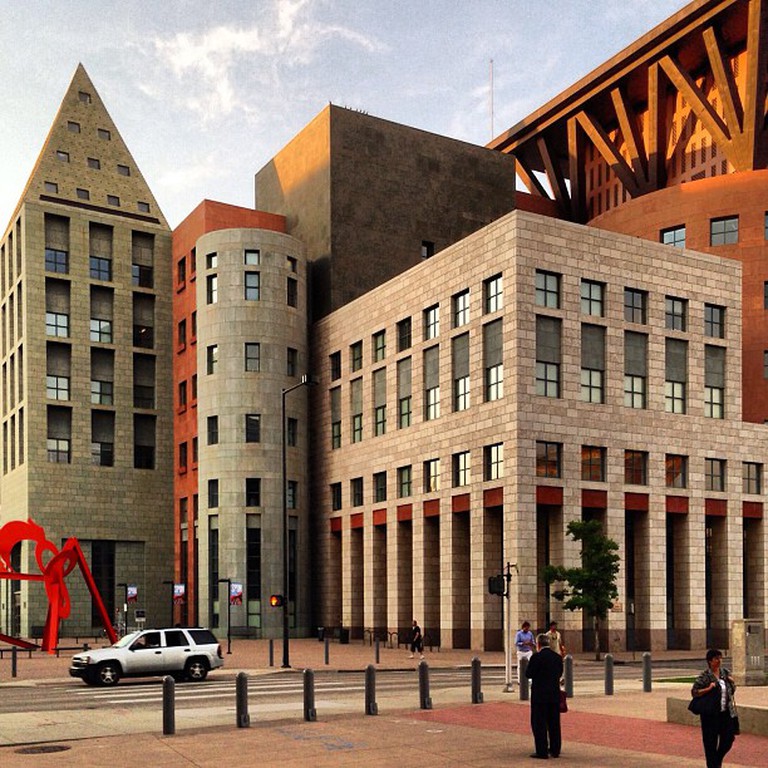 Denver Public Library | (c) David Basulto/Flickr
Denver Central Library, the main hub for Denver Public Library, became a notable piece of post-modern architecture when Michael Graves was commissioned to renovate and design an extension in 1990. What transpired was a surreal, almost storybook combination of classic forms, natural materials, and varying colors that somehow seems like a perfect fit for a library. The interior is all natural wood with high vaulting, giving it a warm yet grandiose presence.
Open In Google Maps
Civic Center, Denver, Colorado, 80204, USA
+17208651111
Visit Website
Give us feedback

This seemingly inconspicuous collection of apartment houses in Capitol Hill, first built in the 1930s, might seem a bit underwhelming, but Poet’s Row has all the charm of a bygone era. These 11 Art Deco style buildings are each unique and named after different literary figures, from Nathaniel Hawthorne to Emily Dickinson to Mark Twain. They have delightful flourishes like curved lines, geometric shapes, and decorative tiles. They also housed some of Denver’s Depression-era citizens at affordable prices, and are an important piece of local history. 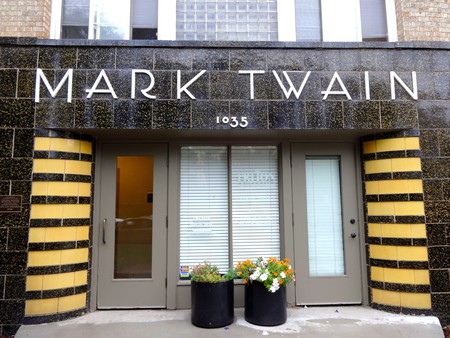 The Boettcher Memorial Tropical Conservatory at the Denver Botanic Gardens has been considered an architectural marvel since its completion in 1966. Designed by Victor Hornbein & Edward White Jr., the conservatory is a registered historic landmark and has been heralded by many to be one of the finest greenhouses in the world. It’s both a functional greenhouse and a sculptural wonder, and its plexiglass and concrete design allows visitors to enjoy tropical greenery even in the winter. 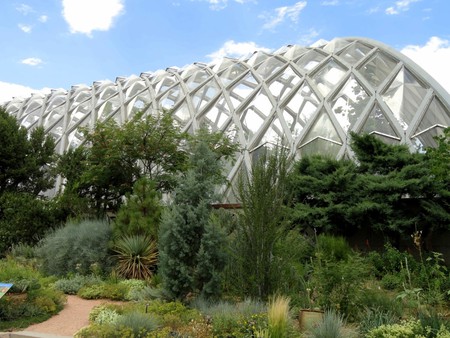