The Most Difficult Music Venue to Book in the United States 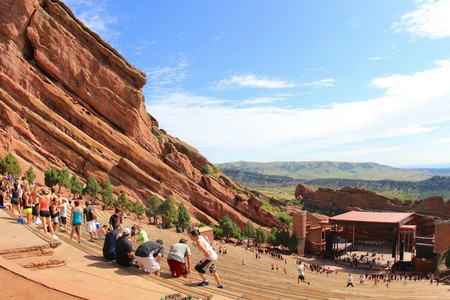 It’s not very uncommon for artists to need to book a venue months ahead of a performance. But five years in advance, that is rare.

On Wednesday, Variety published a feature detailing why Red Rocks Amphitheatre in Morrison, Colorado (located right outside of Denver) booking policy is “the most extreme of any venue in the country.”

Red Rocks first gained esteem thanks to the praise of renowned opera singer Mary Garden in 1911. Since then, legendary acts such as The Beatles, Jimi Hendrix, Sonny & Cher, Depeche Mode, Widespread Panic, The Grateful Dead, and U2 have all taken the stage. These names and the amphitheatre’s epic scenery—nestled in the mountains with the Denver skyline sitting behind the stage—have made performing here a rite of passage of sorts in an act’s career.

Demand for concerts has surged dramatically in recent years, with paid events doubling from 73 in 2010 to 155 in 2016. As Variety reports, the artist-booking policy is constantly evolving, and reserving performances up to five years in advance was common practice until recently:

On Monday, Southwest Airlines announced a competition, dubbed “Destination: Red Rocks,” in which six artists are vying for the opportunity to open for The Fray at Red Rocks on June 26.

Unfortunately, this kind of an opportunity doesn’t come around very often, so, if you’re hoping to play Red Rocks, you better have a good agent, some extra cash, and an open calendar.