The Best Luxury Hotels to Book in Denver, Colorado 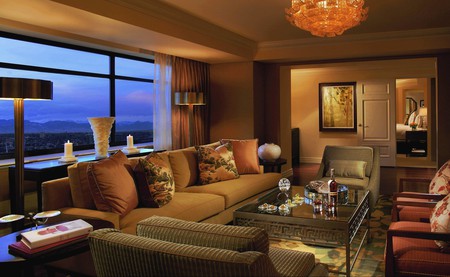 Just 1mi (1.6km) above sea level, Denver is known for its laid-back, outdoorsy vibe, blue skies, and around 300 days of sunshine each year. Once a gold-mining camp, it’s now known as the gateway to the Rocky Mountains, attracting skiers to nearby Breckenridge, Vail, and Aspen. Whether you’re jetting off to higher altitudes or staying in the city itself, these are the most luxurious hotels in Denver, Colorado. 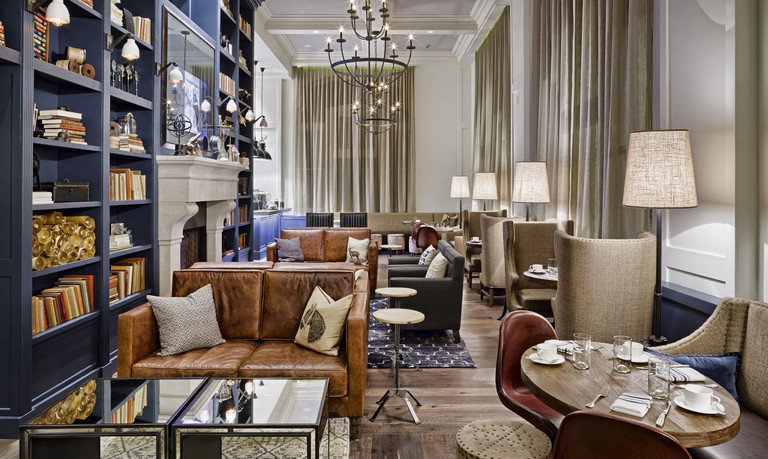 A recently renovated 20th-century Renaissance Revival building in the heart of Denver’s music and theatre district, set against a Rocky Mountain backdrop, Hotel Teatro hits all the right notes. One of the best luxury hotels in Denver is home to hugely popular eatery The Nickel, as well as The Study, a gorgeous lounge, bar, and community space. The unique Denver experience you get here also includes a Craft Beer Concierge and a Charcuterie Concierge.

The Art Hotel Denver, for art at every turn 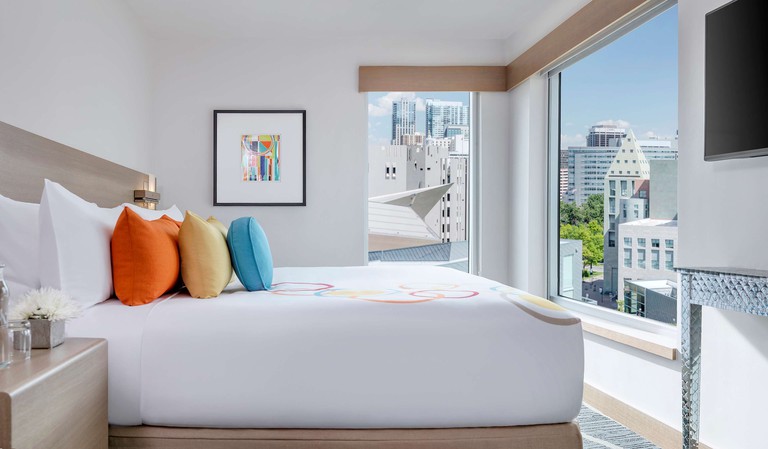 The name is no idle boast. The Art Hotel in the arts district has curated artwork throughout to go with mountain and city views at every turn. Speaking of vistas, you can see downtown from a different vantage point at the fantastic rooftop bar and restaurant – a place where fresh, local ingredients form the backbone of a well-crafted menu and where you can sip cocktails around a dramatic fire sculpture.

The Brown Palace Hotel and Spa, for 19th-century glamor 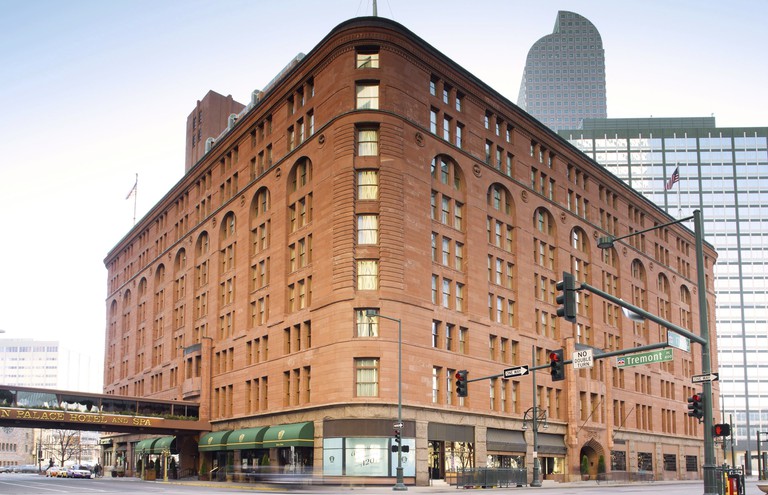 Courtesy of The Brown Palace Hotel / Expedia
Nestled on a corner in Downtown Denver, the Brown Palace Hotel and Spa harks back to its traditional 19th-century roots with a four-poster bed in the presidential suite, wrought-iron balconies, and an impressive stained-glass skylight in the main lobby. Unwind after a day in the city at the spa – it offers couple’s massages alongside ayurvedic treatments. Dine at the grand Palace Arms restaurant, which won the Best of Award of Excellence from Wine Spectator magazine. 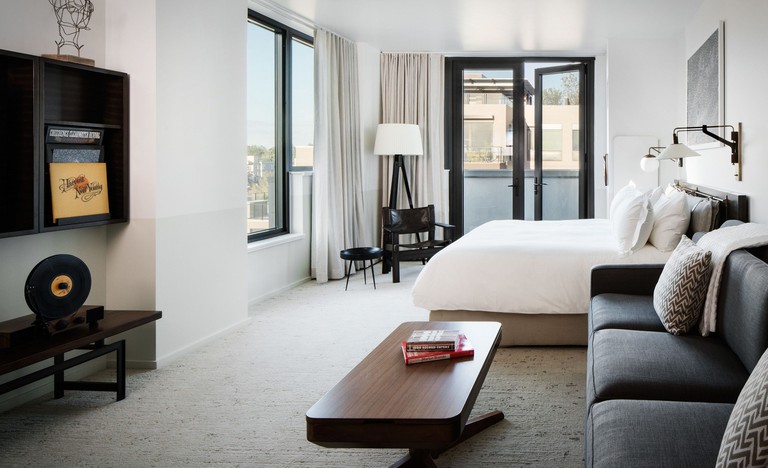 The chic and cozy Halcyon greets you at the Kitchen Counter, where you can sip on a glass of wine as you check into the hotel. Inside each stylish and minimalist suite, you’ll find quirky touches such as a vintage record player, a yoga mat and super-soft Matouk bathrobes. It’s home to three restaurants and a rooftop pool where you can sip an Aperol frosé in a cabana. The best part of the Halcyon is its Gear Garage, where you can rent mountain bikes, skateboards, GoPros, and Piaggio scooters to cruise around the city in style.

The Crawford Hotel, for unusual amenities 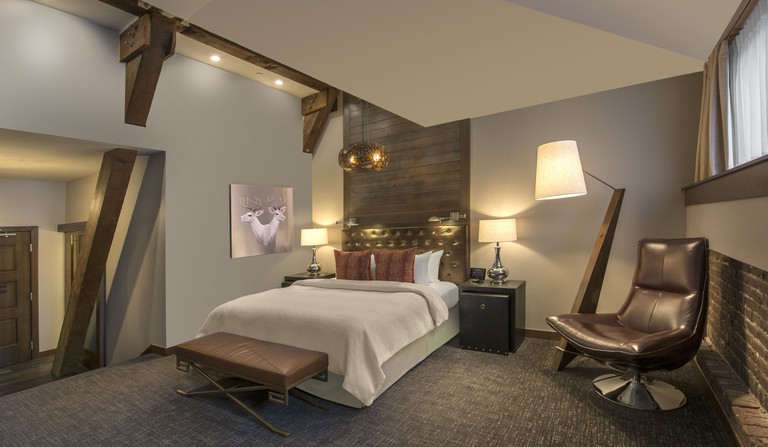 © The Crawford Hotel / Expedia
Housed above Union Station, the Crawford Hotel embraces its 19th-century origins with vaulted ceilings and exposed wooden beams. Each suite has individual quirks – from original artwork to zebra-print chairs – as well as a Nespresso coffee machine, an iPad to catch up on the news, and a courtesy Tesla escort at your disposal. Don’t leave without dining at Ultreia, the Spanish tapas restaurant inside the hotel, led by award-winning chef Jennifer Jasinski.

The Jacquard, for avant-garde cool 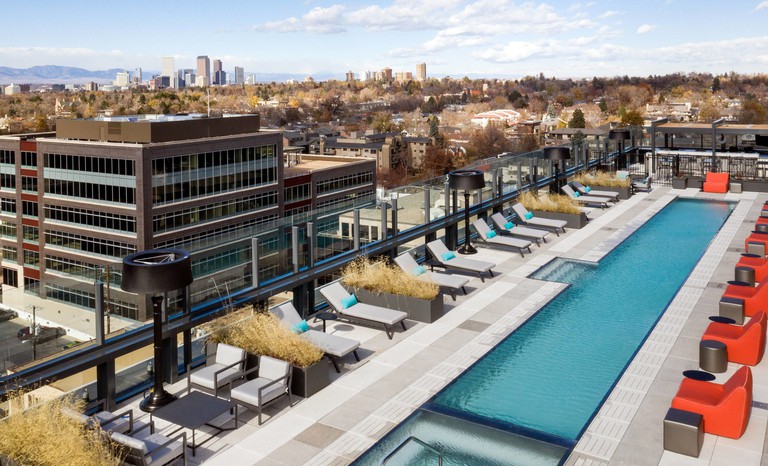 Decorated with avant-garde sculptures and industrial beams, the Jacquard is a sophisticated, contemporary hotel with an unmissable rooftop pool and bar. Dine at Narrative, the hotel’s renowned restaurant where award-winning chef Paul Nagan whips up artistically presented Italian cuisine, such as the pan-seared scallops with sweet corn risotto, bacon, and green tomato relish. Its 750-bottle-strong wine library is something to behold.

The Ritz-Carlton Denver, for city views 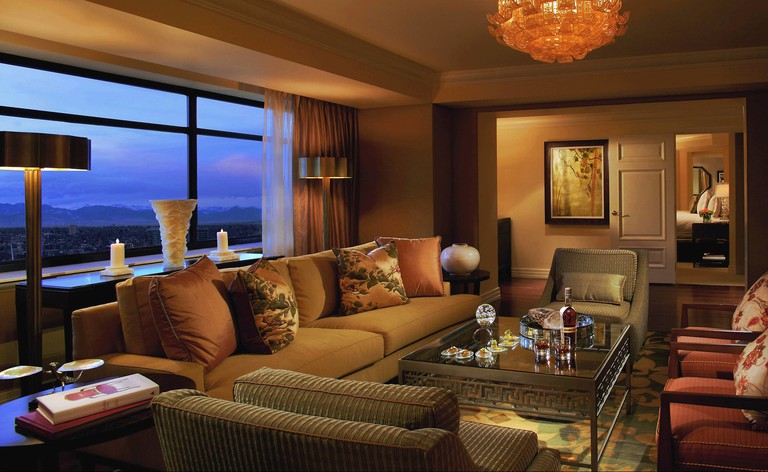 The Ritz-Carlton brand is synonymous with luxury, and its Denver location is no exception. With white, gold, and espresso tones, each spacious room has an oversize marble bathtub, an uber-soft feather bed and city views. Book a Mile High Massage, which utilizes CBD-rich oil, at the acclaimed on-site spa. Kids are also spoiled at the Ritz-Carlton with its City Camper, which includes an indoor tent rental, complete with coloring books and s’mores cupcakes. 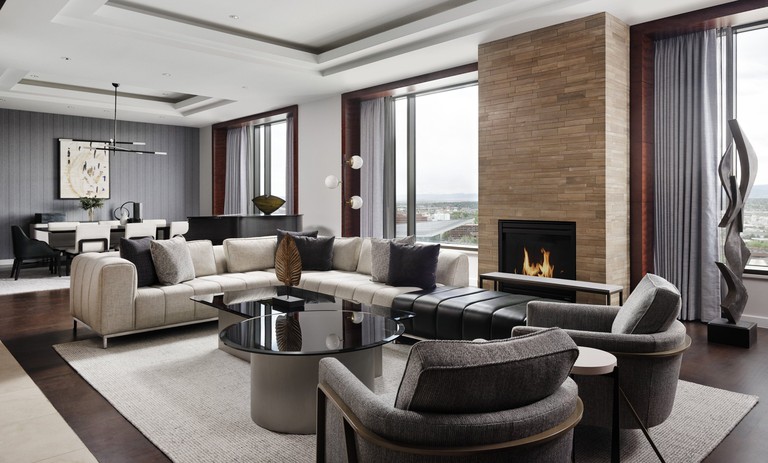 With panoramic views of the Rockies, the Four Seasons Hotel Denver is known for going above and beyond to accommodate your needs. The hotel concierge can arrange a morning of skiing, hiking, biking, rock climbing or fly fishing, depending on the season, followed by a gourmet picnic lunch in Golden. For the less action-minded, explore the boutique shops in Larimer Square, or savor a Colorado-ranch steak at the hotel’s acclaimed Edge Restaurant.

The Oxford Hotel, for attention to detail 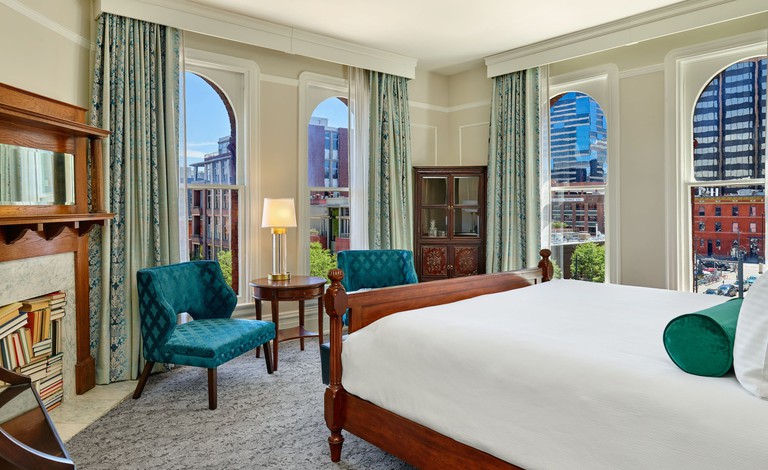 © The Oxford Hotel / Expedia
Opened in 1891, the Oxford Hotel is one of Downtown Denver’s most famous establishments. Inside, you’ll find antique furniture paired with bold fabrics and fine Egyptian cotton bedding. Pour yourself a complimentary glass of bourbon in the lobby every evening, or have a daily charcuterie or cheese board delivered to your room from the hotel’s steakhouse, Urban Farmer. Alternatively, drop into the spa for a Swedish massage before dinner. 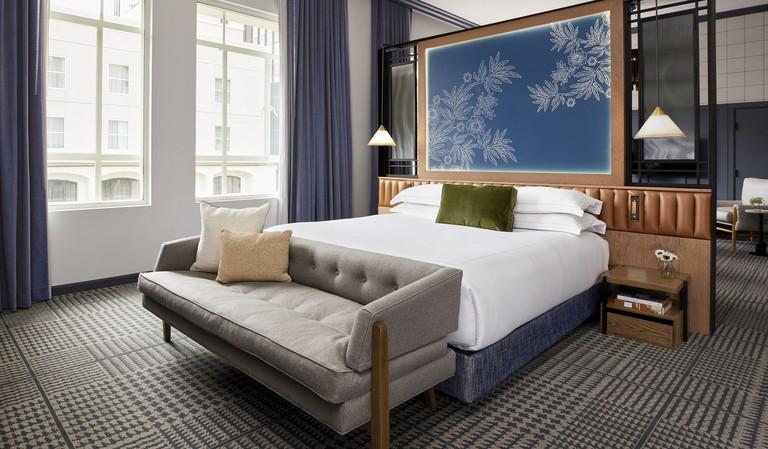 © Kimpton Hotel Monaco Denver / Expedia
The kooky, contemporary Kimpton Hotel Monaco Denver invites you into its cozy suites. Each room is styled with rich blues, neutral tones, and original artwork from local artists. Start your day with sun salutations on your in-room yoga mat, followed by a cycle to the Museum of Contemporary Art Denver on the hotel’s complimentary bikes. Make sure you are back in time for the nightly wine hour at 5pm before having dinner at Panzano.

For some stylish options, discover our guide to the most romantic places to stay, or see the best boutique hotels in Denver. Heading to Golden? See where’s best to stay in the area and book now on Culture Trip.