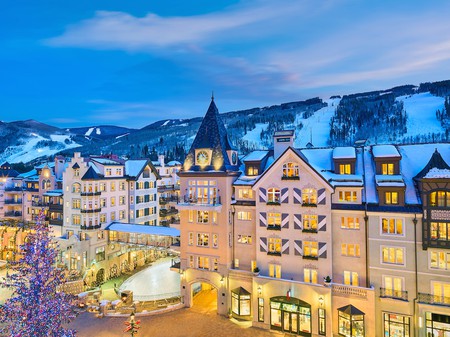 As a world-famous ski destination, Vail, Colorado, has a mostly wintry reputation, but beyond the slopes, the mountain town is steeped in Bavarian culture, history and cuisine. From the distinct Austrian-inspired architecture and the fluffy German-style pretzels to its lederhosen-filled Oktoberfest, Vail offers a taste of the Alps in the Rockies.

Unlike other ski meccas that date back to the mining boom, Vail is a young town that was constructed with two things in mind: skiing and Bavaria.

What differentiates Vail from other iconic US ski towns such as Park City and Aspen is the fact that the village didn’t previously exist as a mining town. Rather, Vail took shape as a destination in the 1960s for skiing. The town was the vision of a World War II veteran, Pete Siebert, who trained in the area to practice alpine survival techniques. Considering how similar the terrain was to the Alps, it was the perfect test run for the 10th Mountain Division. Those parallels would ultimately extend beyond army training to help mold the town’s overall design.

Following the construction of Highway 6, which linked Denver to the area for the first time, Vail Village began to develop. It took its name from the highway architect who made it all possible, Charles Vail. Inspired by mountain villages in Bavaria, Vail filled with lodges, hotels and shops exhibiting classic Eastern European architecture. Siebert, and co-designers like Earl Eaton, wanted to ensure that the Alpine ambience of Bavaria extended beyond the ski slopes itself by creating an entire village reminiscent of Austrian and German culture. 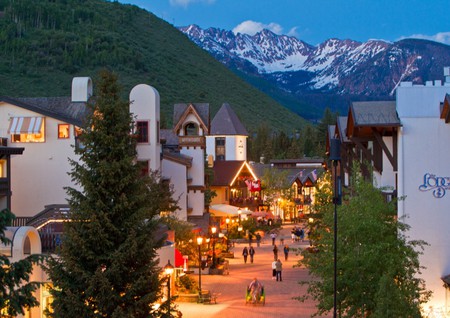 A stroll through Vail Village and adjoining Lionshead Village reveals a series of buildings modeled after Bavarian farmhouse-style architecture, lending a homey vibe to chalet-like hotels, bars, shops and restaurants.

It’s a style of architecture that’s long been prominent in smaller towns in Bavaria, where the motif developed as a necessity against cold weather and snowfall. Immersed in forested landscapes, timber typically played a large role in design as well. Low-angled roofs, shutters, recessed windows, fireplaces and wood predominate in Bavaria as they do in Vail, all just as functional as they are quaint. White and pastel stucco walls provide ample insulation, while decorative trim around doors and windows add just the right flourish.

Today, Vail is filled with resorts of all shapes and sizes, many of which exhibit Bavarian design inside and out. The charming Christiania, for example, got its aesthetic inspiration from a trip to Bavaria by owners Paul and Sally Johnston. At The Arrabelle at Vail Square, an ornate multi-building property modeled after classic Bavarian architecture, visitors can drink in the European landscape from the pool deck overlooking clock towers, colorful shutters, balconies and castle-like pointed roofs.

Altogether, the town upholds a cohesive vision synonymous not only with Alpine ski towns, but with quaint design that exudes warmth and old-time charm. 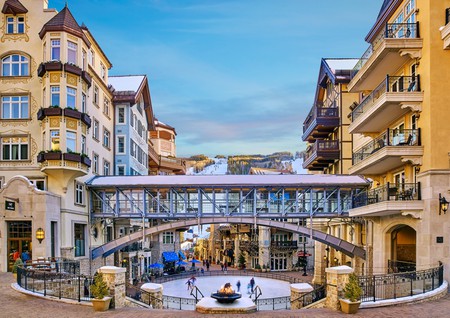 Vail’s Bavarian influence is much more than superficial, with many quality restaurants translating that ethos into menus.

Chief among them is Almresi, a relative newcomer and instant hit in Vail Village. Run by a family of German expats who fell in love with the Rocky Mountains while vacationing, the restaurant’s dining room, which is reminiscent of a snug Alpine cottage, epitomizes Vail’s Bavarian culture. Dark wood paneling, cuckoo clocks and a strudel-filled pastry counter help whisk diners to another continent – even the mini boot-shaped shot glasses are cute, and perfect for swilling Schnapps. Then there’s the menu, a soulful homage to the homeland filled with bubbling cheese fondue, warm and buttery pretzels, Swiss potato pancakes heaped with smoked salmon and dinosaur-sized pork shanks nestled in mashed potatoes. For dessert, kaiserschmarrn is a requisite; the Austrian classic contains bite-sized pancake morsels dusted with powdered sugar and served with tart cherry compote.

Nearly as old as the town itself, Alpenrose has harkened back to Eastern Europe since 1974. The idyllic, timeworn eatery feels like a cozy hideaway in the Black Forest, where folks can hole up and feast on sauerkraut-topped bratwursts, cheesy baked spaetzle and pork schnitzel glazed with lingonberry compote. The beverage menu offers lots of German beer, which is best enjoyed in oversized steins.

Game meat is an integral part of the Bavarian diet, and it takes a starring role at Pepi’s Bar & Restaurant. The longstanding restaurant gets its name from Pepi Gramshammer, an international racer on the Austrian ski team in the 1950s. Together with his wife Sheika, the pair moved to Vail right after the town opened. The taxidermy-clad dining room sets the theme, followed by plates like lamb with smashed marble potatoes, rack of caribou with sweet potato puree and oven-roasted duck with wild rice and red cabbage.

Elsewhere in Vail, Swiss Chalet Restaurant specializes in fondue of all kinds (cheese, oil and chocolate), while Flame takes a modern approach to mountain cuisine with dishes like elk corn dogs and cast iron-roasted chicken with foie gras roulade. 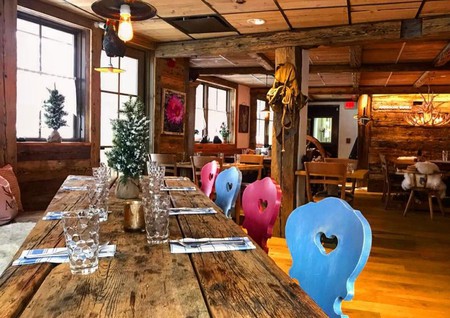 At Almresi, the decor is as cozy as the cuisine | © Almresi

What Mardi Gras is to New Orleans, Oktoberfest is to Vail. The early fall celebration is the time to shine for the Bavarian-inspired town, which features two weekend-long events in both Lionshead Village and Vail Village.

An apt homage to the town’s founding inspiration, Oktoberfest is a family-friendly affair with live music, food, trinkets and more than enough beer. The fest stretches down the center of the villages, lining its main pathway with vendors, as well as makeshift beer bars and eateries.

Entertainment comes courtesy of German bands at the main stage, along with yodelers and alpenhorn blowers. Not to mention the people-watching, as attendees come out in full force and full garb – look for lots of lederhosen and traditional Bavarian hats.

For those looking to get a little more hands-on, the festival features crowd-pleasing events like bratwurst-eating contests and beer keg bowling.

Vail’s Oktoberfest takes place over two weekends each year in September. For a town rooted in Bavarian lore, style and flavors, it’s a fitting celebration of the culture that helped it grow. 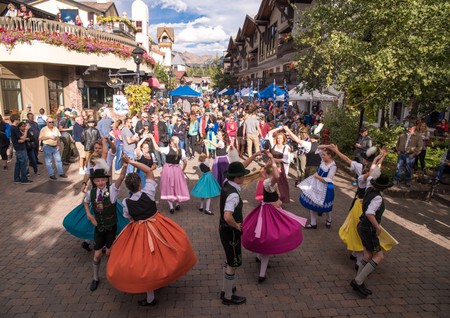 Oktoberfest is a big celebration in Vail, honoring the city's German inspirations | Jack Affleck
Give us feedback