Why You Should Visit The Broad Museum, Los Angeles 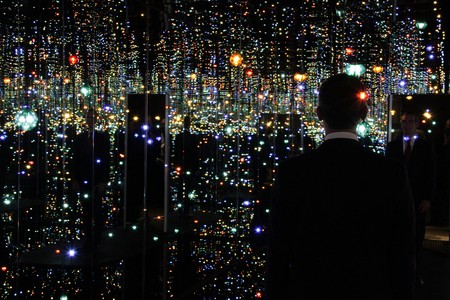 The Infinity Mirrored Room at The Broad © Eric Garcetti/Flickr

After seeing infinite selfies from the Infinity Mirrored Room strewn across social media, we can admit we’ve all been intrigued. But after a little internet research warns us that getting into The Broad requires coveted advance reservations or an hour’s-long wait in a line down the block, many Angelenos are losing their resolve to visit. Don’t give up just yet – at least not until you read through the reasons we think the hassle is 100% worth it.

While admission to the museum is completely free, you don’t have to actually enter its doors to get a taste of some of its most intriguing art thanks to the big reveal of The Veil and the Vault at the end of 2015. With the scaffolding removed around the building, there is now a veiled window through which visitors can see into the museum’s vault, an archive of the works within the museum collection that are not currently on display in an exhibition. Within the vault, over 2,000 works will rotate through the building, allowing visitors to catch glimpses of the pieces in storage. The rest of the ‘veil’ surrounding the building’s exterior has windows in a honeycomb structure, allowing natural light to fill the museum. Watch the time-lapse below to see how the veil was created.

Obviously, the Infinity Mirrored Room is still a major hook. The exhibit is ‘a mirror-lined chamber housing a dazzling and seemingly endless LED light display,’ designed by Yayoi Kusama. Seeing photos of the exhibit and exploring it for yourself, though, are two entirely different experiences. For starters, what the photos don’t convey is the exclusivity of the exhibit. The room accommodates only one person at a time, so each individual’s time is limited to one minute. In addition to a museum reservation, visitors are required to make a separate, same-day reservation after you arrive at the museum – and reservations fill up early in the day. This exhibit is not permanent, but it will remain on display until October 2017, when – drumroll, please – the museum will install five more infinity rooms. 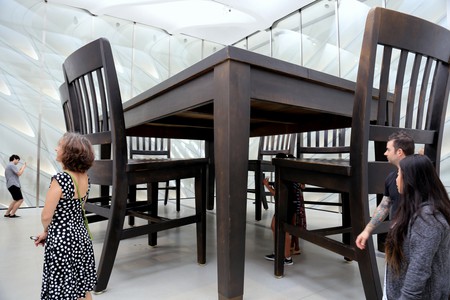 Under the Table | © Robbie Mendelson/Flickr

Aside from these major features, the museum is filled with countless other artworks to surprise and delight. The Creature exhibit currently on view is filled with figures in a wide variety of mediums, creating an effect that is both eerie and fascinating. You can enjoy feeling like Alice in Wonderland at Robert Therrien’s Under the Table installation and browse through the works of such prominent pop artists as Andy Warhol and ‘King of Pop’ Roy Lichtenstein. If the artworks haven’t sold you on this place yet, maybe the legendary foie gras funnel cake at The Broad’s partnering restaurant, Otium, will.