How To Visit San Francisco on a Budget 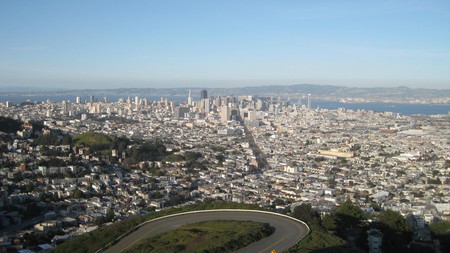 San Francisco is known as the most expensive city in the country. A day out in the magnificent town would cost at least $50, making it difficult to spend an extended amount of time without breaking the bank. Luckily, we have you covered – check out some of the best places to go in San Francisco on a budget so that you don’t have to worry about going broke.

Go for a picnic in Golden Gate Park 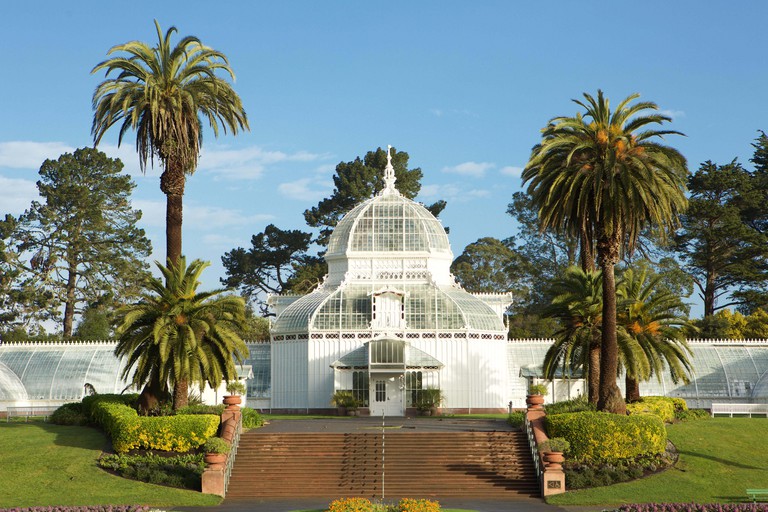 © Della Huff / Alamy Stock Photo
Golden Gate Park is one of those places where you can spend an entire day. Get lost on a sunny afternoon and go on a picnic somewhere. There’s also the children’s playground with a carousel, buffalo at the Bison Padlock, a rose garden, Kezar Stadium, Stow Lake, waterfalls and Dutch windmills. In August you can listen to Outside Lands Music Festival for free by standing outside the venue. There are also several museums in Golden Gate Park you can visit for free on certain days.
Open In Google Maps
San Francisco, California, USA
+14158312700
Visit Website
Give us feedback

Wander down Columbus Avenue, browsing the shops and sights 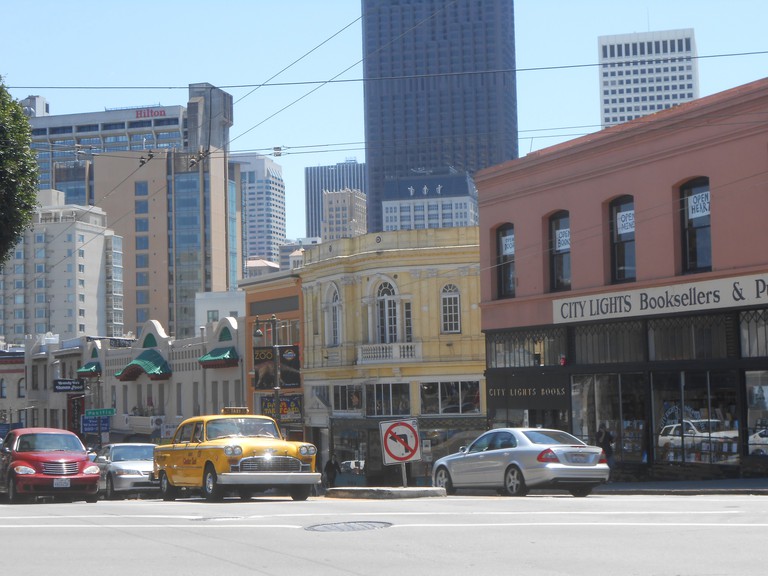 The City Lights Bookstore is a must-see on Columbus Avenue in San Francisco | © Clément Polak / Flickr
Columbus Avenue is a beautiful street that runs through North Beach. Start at the south end of the street, near the Transamerica Pyramid, and take your own tour of the city. The first place to stop at is City Lights Bookstore, a beautiful two-story bookstore that has strong roots with the Beat Generation. After browsing the store, make sure to check out the murals outside. Next, walk a couple of blocks down to Washington Square Park and admire the Saints Peter and Paul Church. If you get hungry, head over to Tony’s Pizza and grab a slice of one of San Francisco’s best pizzas. To end it all, walk a couple more blocks north and find Lombard Street, one of the windiest streets in the world.
Open In Google Maps
San Francisco, California, USA
Give us feedback

Look out over the city from Twin Peaks 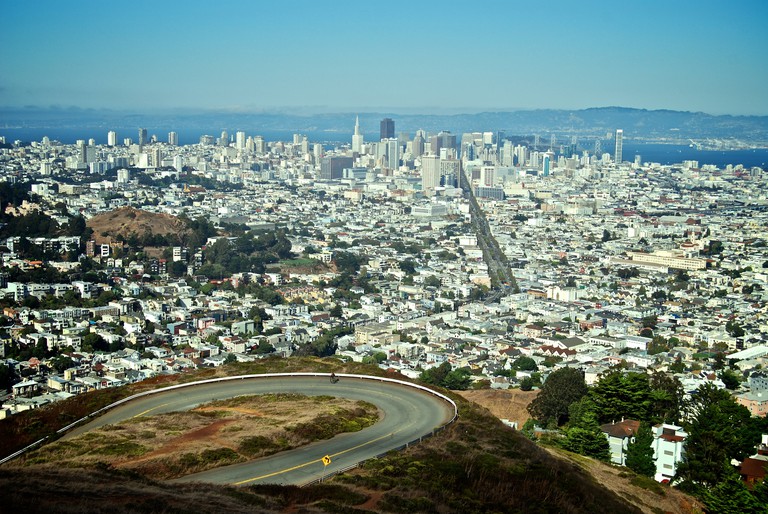 Twin Peaks offers views of San Francisco like no other place does | © Rasmus Zwickson / Flickr
If you’re visiting San Francisco with a car, Twin Peaks is definitely a destination to visit. These hills are the second highest in San Francisco and offer the best lookout point in the city. Bring a map and get an understanding of where everything is. Tip: Make sure you go on a sunny day because Karl the Fog is notorious for ruining this spot.
Open In Google Maps
Twin Peaks, San Francisco, California, USA
Give us feedback 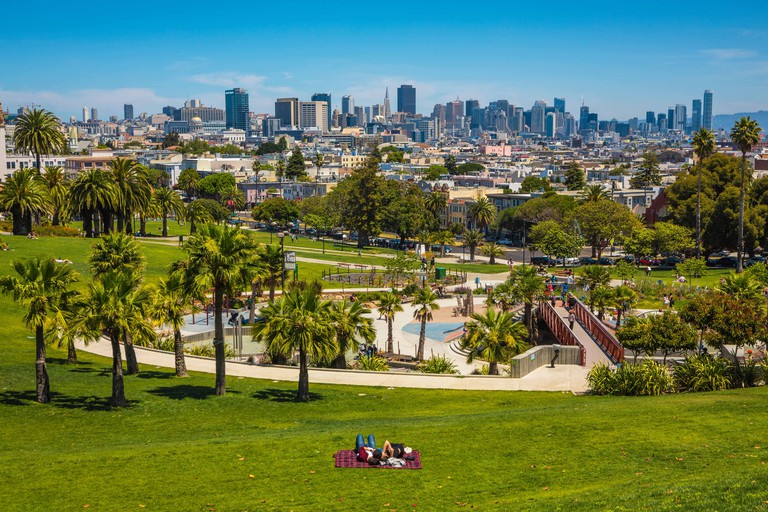 Mission Dolores Park | © Gonzalo Azumendi / Alamy Stock Photo
Book Now
Dolores Park, one of the best in the city, recently underwent reconstruction, adding to its excellence. The view of downtown is incredible, and the people there are just basking in simple fun. Bring a frisbee or football and enjoy the environment. If you’re over 21, be sure to find the coconut rum man, who sells exactly what it sounds like. If he’s not there, go to Bi-rite, one of the best ice cream spots in the country.
Open In Google Maps
19th Street, Mission District, San Francisco, California, 94114, USA
+14155549521
Visit Website
Visit Facebook page
Give us feedback

Splurge on vintage clothes and records in Haight-Ashbury

Haight-Ashbury was the birthplace of San Francisco's hippie movement | © Daniel Schwen / WikiCommons
Haight-Ashbury is a historical location where San Francisco’s hippie movement was established. If you’re on a budget, this area might be a risky place to go because of all the shops. However, there are still plenty of things to do even if you’re not looking to spend much. The first thing to do is go record-hunting at Amoeba. Another thing to do is visit Charles Manson’s house and the Grateful Dead house, both located near Haight and Ashbury Street. For a good bite to eat, check out Bacon Bacon, a bacon lover’s paradise, and a good cheap eat.
Open In Google Maps
San Francisco, California, USA
Give us feedback

Snap photos of the murals at Coit Tower and Clarion 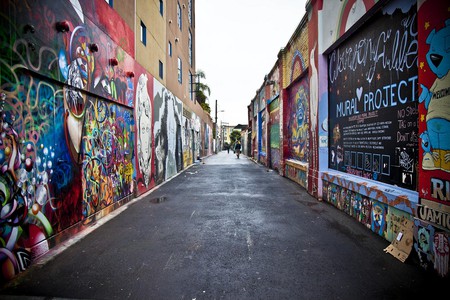 San Francisco is an extremely artsy city, so one of the best free things to do is to go and explore the art on the streets. Some of the best murals are at Clarion Alley in the Mission and inside the Coit Tower. These are some of the more popular places for street art, but they can be found around the whole city. 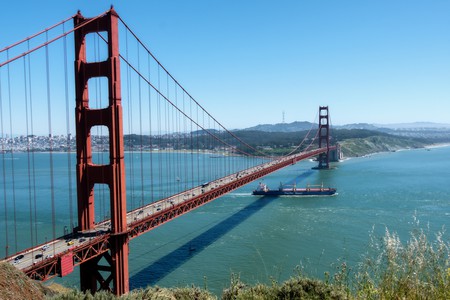 North San Francisco is sometimes regarded as a tourist trap to the locals, but it does offer some budget-worthy spots to visit. The first place would be the mighty Golden Gate Bridge. Continuing west is Crissy Field and Ghirardelli Square. Fisherman’s Wharf is also along that direction, but if you’re on a budget, this place might tempt your wallet. Instead of buying tourist shirts that say “I Heart SF,” enjoy the street performers and visit the sea lions over at Pier 39.

Go on a hike to explore the city

One of the best things to do on a budget is to go on a hike. If you want to stay in San Francisco, check out Bernal Heights. This hike takes about 45 minutes, and the view is completely worth it. After Bernal Heights, grab a cup of coffee at Philz. If you’re looking for a more challenging hike, you have to go outside of San Francisco to the Marin Headlands. There are countless hikes that could take up your whole day.