Where To Eat Insects In LA, And Why You Should

Chapulines | © Verino77/Flickr
For many culinary pioneers, insects are the superfood we’ve all been waiting for. Ounce for ounce, crickets, for example, contain more than twice the protein found in beef, are a more complete amino acid, and have three times as much iron. Taken together – the nutritional density of insects, the significantly lower environmental impact of microcultivation (aka bug farming) vs. the US’s now notoriously excessive beef production, and the approximately 1,700 edible insect species on the planet, it seems like a no-brainer to welcome bugs onto our plates. There’s only one hurdle left to overcome – our sheer anxiety.

Getting Americans to come around to entomophagy, the practice of consuming insects, their eggs, larvae, and pupae, is a slow process, but it is underway. Over 30 restaurants serve insects in California, a dozen more in New York, and a smattering of other states within the USA. Meanwhile, 80 percent of the world’s population already consumes a diet including insects, which begs the question: what are we waiting for?

Here are a few places for forward-thinking Angelenos to mull it over.

Typhoon is perhaps the best-known purveyor of insects in LA, and it’s the only one in town with an actual insect section on the menu. Go for the gold with the mild Singapore-style scorpions on shrimp toast or Taiwanese crickets, stir-fried in garlic, chili pepper, and basil. Sometimes there are ants and silkworm pupae on the menu as well. The creepy crawlies are proudly featured within a menu of delicacies from the Pacific Rim, including Thai, Chinese, Vietnamese, Filipino, Korean, and Burmese cuisines, so you can ease yourself into the plunge with some tried-and-true favorites. 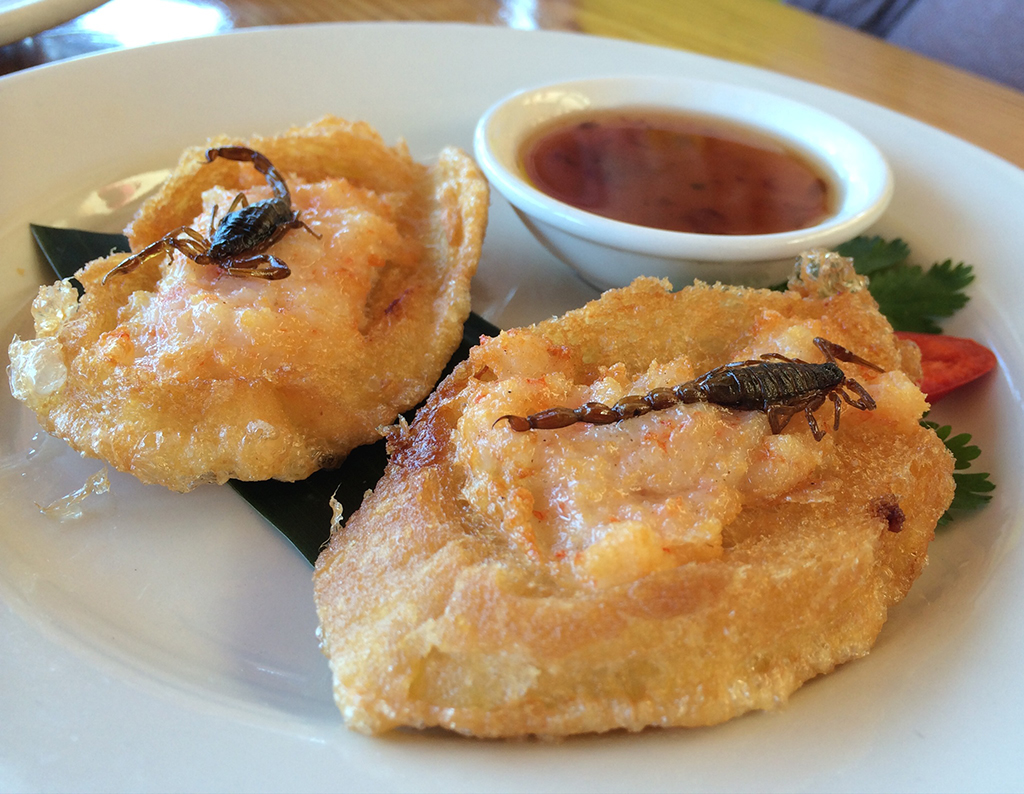 Restaurant, Mexican, $$$
Guelaguetza Restaurante, Los Angeles | © William Neuheisel/Flickr
It’s no surprise that half of the restaurants serving up insects in LA are Oaxacan, considering chapulines(aka grasshoppers) is a popular bar-style snack in this cuisine. Try the chapulines at one of the best Oaxacan eateries in the city, Guelaguezta, where they are fried to crunchy, salty, tangy crisps dusted in chile. Or buckle up for dinner and order chapulines a la Mexicana,a stewy sauté of tomatoes, bell peppers, onions, and grasshoppers topped with Oaxacan-style string cheese (quesillo)and avocado. Spoon up a serving into a fresh handmade tortilla and squeeze some lime on it before sending it down the hatch, leggy little bodies and all.
More Info
Open In Google Maps
3014 West Olympic Boulevard, Mid City, Los Angeles, California, 90006, USA
+12134270608
View menu
Visit website
Visit Facebook page
Send an Email
Give us feedback

Bar, Restaurant, Korean, $$$
While Mok Maru Jong Jul Sip may seem like a standard sports bar at first glance, fitted with a dozen flat-screen TVs representing the LA teams, and with a menu that reads like an Applebee’s with the likes of baby back ribs, mozzarella sticks, and fried calamari, visitors will remember they’re in the belly of Koreatown when they come across this menu item: beondegisoup, a super-spicy chili-based vegetable stew with a generous helping of silkworm pupae. The segmented bodies of the floating insects bear a resemblance to raisins, but the distinctive flavor – described as earthy, salty and with a gritty texture – is all their own.
Looks like it's closed Hours or services may be impacted due to Covid-19
More Info
Open In Google Maps
222 North Western Avenue, Central LA, Los Angeles, California, 90004, USA
+13234656803
View menu
Visit website
Visit Facebook page
Send an Email
Give us feedback
Give us feedback