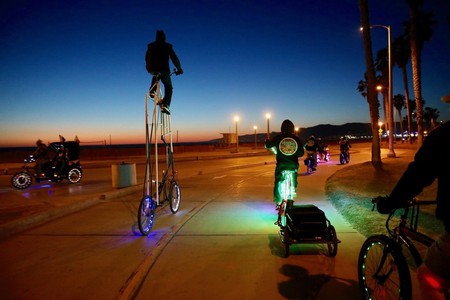 Every Sunday, cyclists gather at sunset under the iconic Venice sign for an LED bike cruise. This local meet-up is called the Venice Electric Light Parade (VELP) and is a free public event.

The offbeat cycling meetup takes place on the corner of Windward Avenue and the beach, where people get together and embark on a dazzling LED-lit bike cruise. Venice Electric Light Parade isn’t actually a parade – it’s more like an awareness group with a twist.

Led by the event’s organizer, Marcus Gladney, dozens of people gather on bicycles adorned with furs, flashing lights and patterned LED installations on their vehicles. They discuss bike safety, and ultimately, the meet-up turns into a light party between the streets and beaches of Venice. 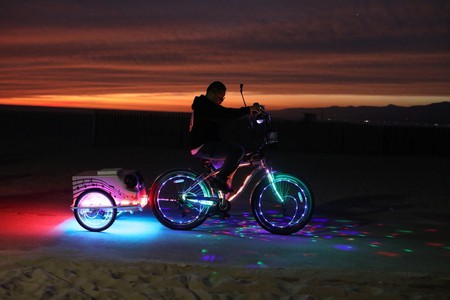 As the sun sets on Venice, VELP hits the road, parading through the streets and on bike paths until hitting Santa Monica. The spectacle is a high energy event that ignites the night with both light and music – and it’s open to anyone and everyone interested in participating.

Gladney explains the 2015 origin of VELP. It all began while watching the sunset with his good friend, Sebastian the Light Man. According to locals, Sebastian is known as the father of the bike light movement in Venice Beach, touting the slogan: “Get lit or get hit.” 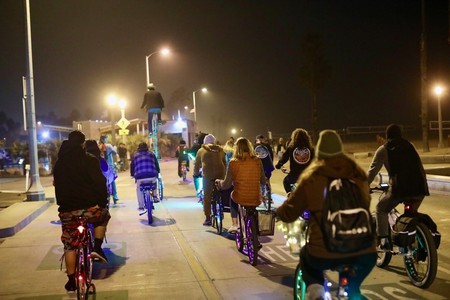 After repurposing aquarium lights into custom bike wheel designs, Sebastian soon became the local aficionado of all things LED. Gladney took notice of the growing phenomena and further developed the idea (with the blessing of Sebastian) into the weekly night ride now known across the world.

With the evolution of VELP came a more refined slogan: “Get lit don’t get hit.” This rallying cry is as much a statement to cyclists as it is to drivers. Los Angeles is a car-centric city, but is now on the cusp of decisive pro-cyclist regulation after paying out $19 million in lawsuits involving cyclists either injured or killed on the city’s streets in 2017.

By creating an eye-catching event, Gladney effectively raises bicycle safety awareness in the most positive and upbeat way possible. 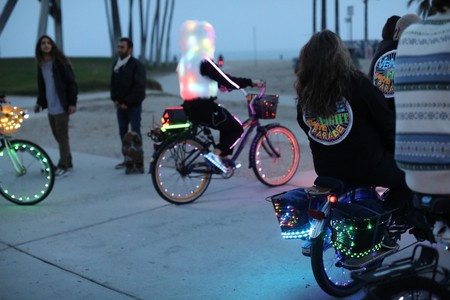 The parade certainly stops people in their tracks | © Marcus Gladney

The best part about this magical experience is that everyone is invited to join and there is never any entrance fees. So, if you don’t have lights, get your bike “lit” on the spot with a custom wheel display for a small donation. The custom bicycles and light displays of VELP change as often as the people who show up.

From freakishly tall bikes to a mobile DJ bicycle (complete with turntables) there is always something unique to see at VELP, with attendance swelling to 100 cyclists at times. For those in the Venice area on Sundays at sunset, look out for this gaggle of lit bikers and join the ride. 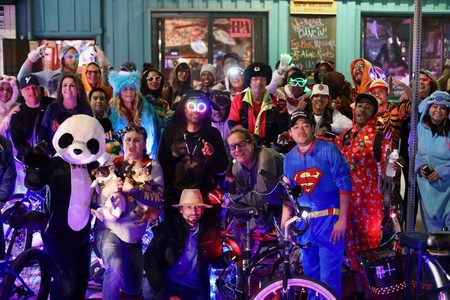 For more information on VELP, check out the videos below: