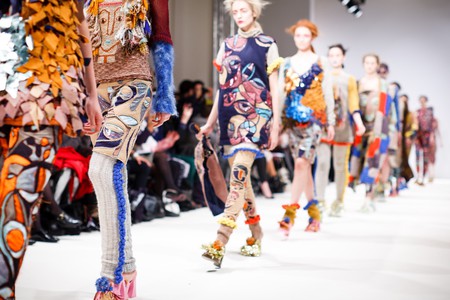 Just as technology rocked the Bay Area, inciting scores of startups to open shop, fashion has also sparked change in the region. San Jose may not be as populated as San Francisco, but it’s still home to some of the most creative minds in the fashion game. Get acquainted with these six fashion designers in San Jose, before their clothing becomes too exclusive to find in stores.

Lauren Barisic is a California local who constructs beautifully made clothing. She began sewing at a young age and launched herself into the world of custom designs. Form fitting and feminine, her work has been everywhere from Fresno to San Francisco. Her pieces feel like they belong in a different era, which makes sense as she cites vintage films as an early inspiration.

Can't wait for #ArtHopFresno tomorrow night! It was so much fun to collaborate with @francisco_illustrations on this gallery event; we made a great team, Frank! #fashionillustration #style #currated #gallerywall #sogladitsdone #arthop #FresnoArtHub #FRItGirlsCollection

The Last + The Lost

Inspired by Japanese streetwear and Alexander McQueen, this funky fresh fashion line is one worth loving. The Last + The Lost features clothes that can easily transform a look from quirky casual to a rocking night out.

I.B. Bayo’s clothes are colorful, vibrant, and breathtaking. Originally born in Nigeria, Bayo hails from a family of traditional weavers, sparking a deep interest in designing clothing and implementing African elements into his American line. Hand-woven, hand-dyed, and embroidered fabrics from Nigeria catapult I.B. Bayo’s line into a league of its own.

Sacred geometry has been wildly popular lately. Many people believe that elements of sacred geometry are in nature, so why not represent this in fashion? Detailed spirals and fractals are present in the designs created by Sacred G Collective—a group of artists from the Bay with a divine passion for sacred geometry. They primarily print T-shirts for both sexes and offer their psychedelic patterns at affordable prices.

Have you ever noticed that there aren’t a lot of T-shirts featuring powerful women? The woman behind Smarty Womyn did and wanted to do something about it. In an effort to encourage women to pursue careers in STEM, the brand launched a line of T-shirts that feature some intellectual badass women, such as Marie Curie.