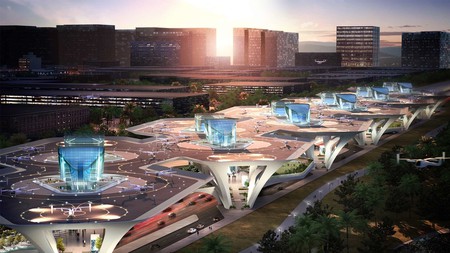 In a bid to create the ‘world’s first urban aviation rideshare network,’ Uber has this week unveiled new designs, including an updated air taxi prototype and six take-off and landing ‘Skyport’ concepts.

The flying taxi prototype, named eVTOL aircraft for ‘electric vertical take-off and landing’, looks like a cross between a helicopter, airplane and passenger drone.

The vehicle will hold up to four passengers and have ‘pedestrian friendly’ high propeller blades that leave space for riders to board and disembark without having to duck. While the vehicles will initially be piloted by humans, the company plans for the sky taxis to eventually fly autonomously. 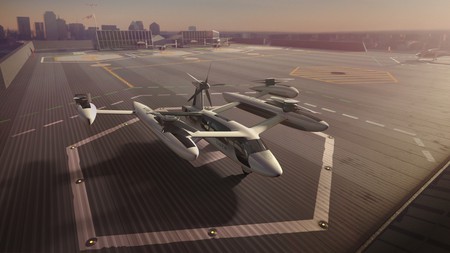 Uber also unveiled six “Skyport” prototypes. Submitted by leading architecture and engineering firms, the proposals consider the infrastructure required to support fleets of flying urban taxis, and were chosen by Uber for their ‘high degree of realism and technical feasibility’.

The port designs were required to work in crowded city locations such as concert halls and stadiums, be capable of handling more that 4,000 passengers per hour within a three acre footprint, provide charging stations for the air taxis, and meet noise and environmental requirements. 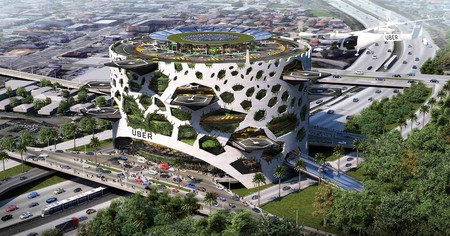 A proposal from Connecticut-based architecture studio Pickard Chilton envisioned modules that could be stacked up either horizontally or vertically, while Dallas-headquartered Humphreys & Partners designed a round complex based on a beehive.

‘While UberAir might feel like a far-away dream, it’s closer than you think and urban infrastructure has to start to evolve now to keep up,’ said John Badalamenti, Uber’s head of design for advanced programmes and aviation, in a statement.

‘We’re excited to have collaborated with leading firms to imagine how physical Skyports would work at scale and how we can best design spaces that are quiet, environmentally conscious and create natural pockets of activity for the transportation of the future,’ he continued. 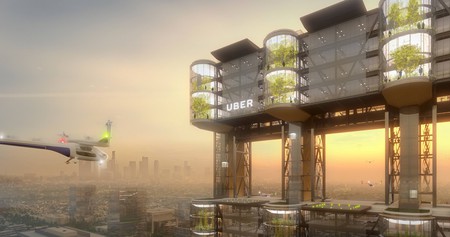 The UberAir service aims to begin operating demonstrator flights in 2020, and launch commercial operations in 2023. According to the brand, air taxis would be hailed using the Uber app and would allow for quicker and more environmentally-friendly transport in densely populated urban areas.

Los Angeles and Dallas have already been selected as pilot cities, while Uber is currently seeking a third international launch location.

For an in-depth look at the hurdles facing flying taxis – including regulations, technical challenges, and public confidence — see our feature Are Flying Taxis Really Coming to These Cities?