With more than a dozen string quartets calling the Bay Area home, there are plenty of opportunities to hear live chamber music this season. From classical to contemporary, pop to jazz, Americana to international, here are 10 established and emerging groups to watch. 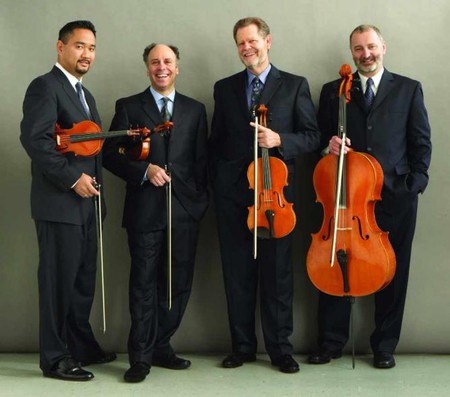 Founded in 1981 in New York City, the Alexander String Quartet teaches and performs at San Francisco State University, and is also in residence at San Francisco Performances. The group frequently concertizes in venues across the Bay Area; the colorful lectures of Robert Greenberg accompany weekend recitals (this season’s offerings center on Beethoven and Mozart). The Alexander Quartet has released several dozen albums, including the ambitious quartet cycles of Beethoven, Shostakovich, and Bartók. Alexander’s Beethoven performances, in particular, are not to be missed. 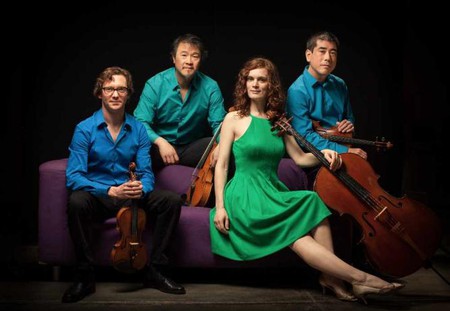 The Del Sol String Quartet has commissioned and premiered over 100 works by composers including Mason Bates, Gabriela Lena Frank, and Hyo-shin Na, among many others. The group’s members are also among the most active chamber music educators of the Bay Area, frequently performing and teaching at local elementary, middle, and high schools, in addition to working with composers and performers in conservatories and colleges across the country. Del Sol has recorded seven full-length albums since 2001 — hopefully, more will come. Founded in 1992, the Del Sol Quartet recently welcomed a new first violinist, Benjamin Kreith. 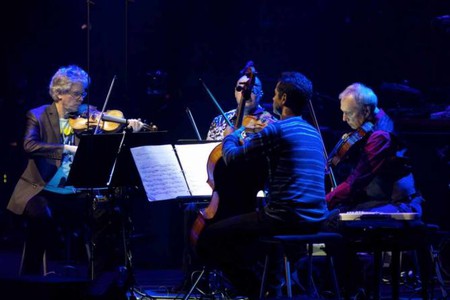 Founded in 1973 and largely maintaining its original personnel, the Kronos Quartet is the oldest active quartet in the Bay Area, and is among the most established of new music groups in the country. Renowned for its collaborations with composers, particularly Terry Riley, Kronos has also worked with a variety of musicians from around the world, ranging from pipa virtuoso Wu Man to David Bowie. The group has released a staggering 50-plus recordings; for its 40th anniversary, Nonesuch produced a retrospective box set as well as A Thousand Thoughts, an album of mostly unreleased tracks. Kronos has received many awards, including a Grammy for Best Chamber Music Performance (2004) and the prestigious Avery Fisher Prize (2011). 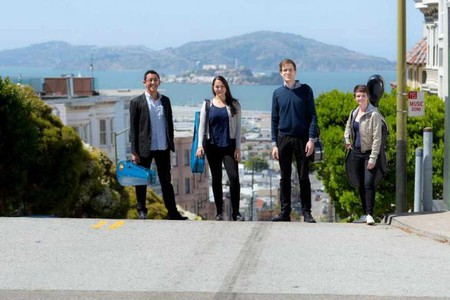 The 2014-founded Thalea String Quartet may be young, but will likely be making waves this year, with performances at Old First Concerts, the Banff Centre, and the San Francisco Conservatory of Music. Thalea has received coaching from members of several acclaimed groups, including the Bay Area’s Kronos Quartet, Alexander Quartet, and Ives Quartet (now the Ives Collective). The group was recently named the first quartet-in-residence at San Francisco Conservatory, and its exciting upcoming season includes rarely performed quartets by Verdi and Hindemith, in addition to standards by Beethoven and Webern. 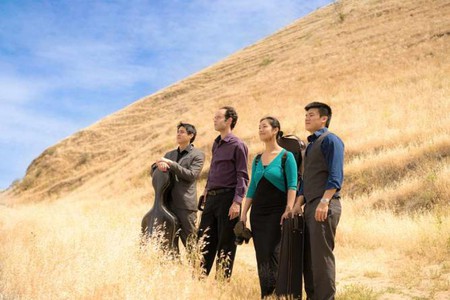 Another emerging group, the Telegraph Quartet received the prestigious Grand Prize at the 2014 Fischoff Chamber Music Competition just months after forming in September 2013. Telegraph’s recitals display ensemble playing at its finest; it’s no wonder that the quartet has already gained residencies at several music festivals. The group hasn’t yet recorded a feature album, but recently received a grant from San Francisco Friends of Chamber Music to record Leon Kirchner’s Quartet No. 1 and Webern’s Five Movements for String Quartet. Its upcoming season is packed with classics by Haydn, Schubert, Dvořák, and Beethoven in addition to neglected gems by Niels Gade, Erwin Schulhoff, George Rochberg, and Henry Cowell. 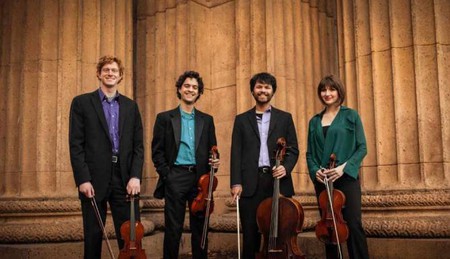 The Friction Quartet is dedicated to the performance of new music, and has commissioned and/or premiered more than 90 works for string quartet since forming in 2011. Its programs feature refreshing range within the larger stylistic category of contemporary classical music, and its performances are dynamic. The quartet hasn’t yet done much recording, but was featured on an album of David Conte’s chamber music, released by Albany Records in June 2014. Friction has recently performed at Old First Church and Center for New Music, in addition to appearing in West Edge Opera’s 2015 Festival. The quartet’s 2015–16 residences include San Francisco Friends of Chamber Music, Western Washington University, and CSU Long Beach. Friction was featured in the San Francisco Bay Guardian’s 2014 On the Rise issue. 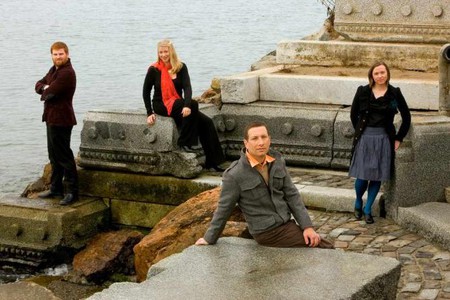 Founded in 1996, the Cypress String Quartet has recorded more than 15 albums of classical and contemporary chamber music. Its ingenious Call & Response series commissions new works — by composers such as Jennifer Higdon, Kurt Rohde, and George Tsontakis — inspired by the cornerstones of quartet literature. This program has proved a hit with students, and like the Del Sol Quartet, Cypress — formerly a quartet-in-residence at San Jose State University — maintains a strong presence in Bay Area schools. This fall, the Cypress Quartet will perform the complete Beethoven string quartets in historic venues across Budapest, Vienna, and Prague. 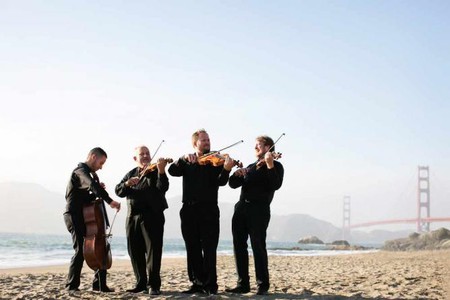 Founded in 2001 by locally renowned violinist and composer-arranger Jeremy Cohen, Quartet San Francisco is best known for its tango and gypsy jazz arrangements, but embraces numerous other styles, from pop to bluegrass. The quartet has recently toured in China, Japan, Korea, and Turkey, and has released a handful of recordings over the years, notably the Grammy-nominated QSF Plays Brubeck in 2009 and Látigo, an album of Latin and tango music, in 2006. Cellist Andres Vera joins the group this season; be on the lookout for 2015–16 concert dates. 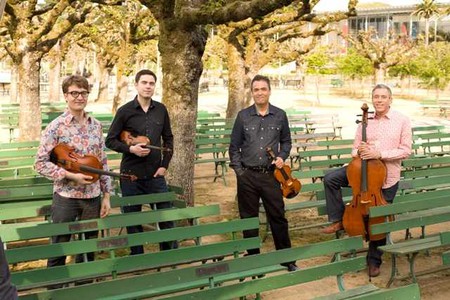 The Turtle Island Quartet has won two Grammy Awards for Best Classical Crossover Album, and boasts a core repertoire of hundreds of arrangements and original works encompassing jazz, rock, R&B, funk, and folk music, in addition to music from Latin America and India. Past performances have included works of and inspired by Jimi Hendrix, John Coltrane, Vince Guaraldi, and many other popular musicians. Founded in 1985, Turtle Island has recorded over a dozen albums, most recently Confetti Man (2014). The group is also active in education, specifically in encouraging young string players to explore different performance genres. 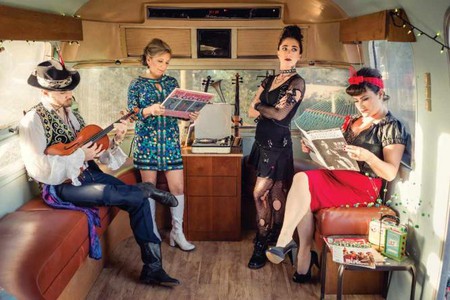 Led by Irene Sazer, a founding member of the Turtle Island Quartet (second violinist Alisa Rose was formerly a member of Quartet San Francisco), the Real Vocal String Quartet plays in a wide range of styles, including jazz, rock, pop, and rural American song. Each member of the group sings in addition to playing his or her instrument both traditionally and percussively. Real Vocal has recorded two albums, and recently raised more than $10,000 through Kickstarter to fund the EP Americana.