The city of Burlingame, is becoming one of the Bay Area’s best places to live. Although Burlingame, California is known for its expensive lifestyle, these top 10 places provide incredible food with affordable prices. 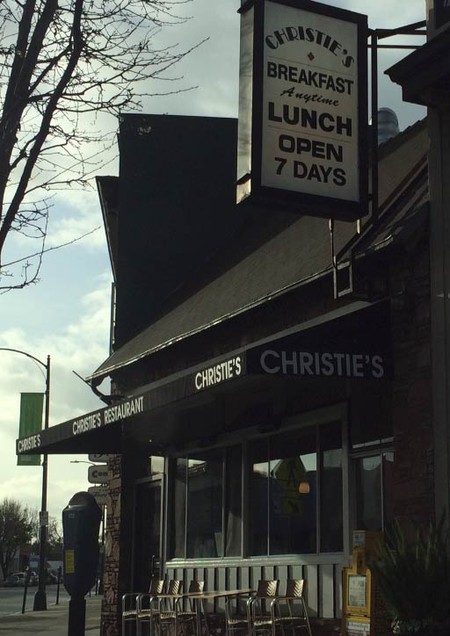 Diner, Restaurant, American
Facebook
Email
Twitter
Pinterest
Copy link
Share
Map View
Burlingame is a city that takes breakfast and brunch very seriously. Christie’s is a breakfast place so memorable that some celebrities have also dined here. Upon entering, the ambience is diner-like, and always filled with chatting friends and giggling children. On one of the walls is a corkboard filled with pictures of locals and business cards of people who have eaten there, and the walls are plastered with interesting paintings. This establishment serves the usual breakfast foods that come fast and are delicious. Christie’s makes wonderful omelets that are so big that one would be plenty for two. Families are frequent diners here because the food is so good and cheap. Kids yell with glee when they are presented with their stacks of chocolate chip pancakes that have the perfect chocolate-to-pancake ratio. The breakfast burrito and bacon waffle are also crowd favorites and prove that Christie’s is the place to go.

Located on Burlingame Avenue, the center of most shopping excursions and restaurants is a family-owned place called Crepevine. This restaurant always has a line going out the door because this is where all the locals dine. Don’t let that discourage you; the fast service allows customers to eat in no time. Although Crepevine is known for their sweet and savory crepes, they also have other items on the menu such as pasta, eggs Benedict, fish tacos, and hearty chili. Crepevine is also easy on the wallet and servings are so generous that two diners could easily share. Served here mouthwatering savory crepes like the Tuscany, which is filled with grilled pesto chicken, melted mozzarella, and tender mushrooms and onions. Plus, most meals also come with a complimentary salad and choice of sweet potato fries, regular French fries or house potatoes. Locals agree the roasted house potatoes with parsley and rosemary are satisfying and delicious enough to be an entire meal. Lastly for dessert, the local favorite is the crepe good enough to be named after the city: the Burlingame Crepe. This decadent dessert satisfies all with its fillings: Nutella, strawberries and bananas with a side of whipped cream and silky smooth vanilla ice cream.

Nestled on Broadway Avenue is a delicious sandwich shop called Bonne Sante. This small venue is straight and to the point about their food: it’s all about the sandwiches. The price point is surprisingly low since the sandwiches are larger than the average person’s head. Just like any sandwich shop, there is the option of customizing and building sandwiches. However, most steer clear of that and order off the preset menu. Bonne Sante is most known for their sandwiches loaded up with giant and mouthwatering hamburgers. Their best selling sandwich, The Wrangler, is enough for two to share and includes two hamburger patties, with onions rings, lettuce, tomato and barbecue sauce. It’s a challenge to finish the sandwiches because portion sizing is amazing so definitely bring friends.

Hot Wok Bistro
The ultimate hidden gem of places to eat in Burlingame is Mr. Teriyaki. This Japanese restaurant is owned by a local family who believes in providing good food at a very low cost. This joint is visited mostly by businessmen who eat here during their lunch breaks and want to indulge in fresh sushi and large bento boxes. The menu includes hot ramen, sushi rolls, tempura, miso soup, beef and chicken teriyaki. Although their lunch bento boxes with California rolls and teriyaki are delicious, the main reason why people flock to Mr. Teriyaki is because of their sushi rolls. A crowd favorite, the volcano roll, is filled with crispy tempura and crab topped with spicy tuna. This place cannot be beat.

Bistro, Restaurant, Chinese, Contemporary
Facebook
Email
Twitter
Pinterest
Copy link
Share
Map View
Although this Chinese restaurant lies on the San Mateo side of the Burlingame-San Mateo border, Burlingame citizens eat at this restaurant because of its proximity to many Burlingame homes. Upon arrival, complimentary steaming sweet and sour soup awaits at the table with small menus. All wall space is filled with pictures of local regulars eating the tasty food served at Hot Wok Bistro. The family-owned restaurant serves favorites such as chicken chow mein, beef fried rice, kung pao chicken and honey walnut shrimp. The items most frequently seen shuffling in and out of the kitchen are the pot stickers and Mongolian beef. Be warned that the pot stickers take a little longer to be served because they are fried right on the spot, but are worth the wait. The Mongolian beef, on the other hand, is served quickly with a mix of sauteed beef, green onions and garlic with a hint of spicy sauce. This sizzling dish is the perfect savory dish that goes perfectly with a bowl of steaming white rice. Hot Wok is the most bang for the buck Chinese food place. 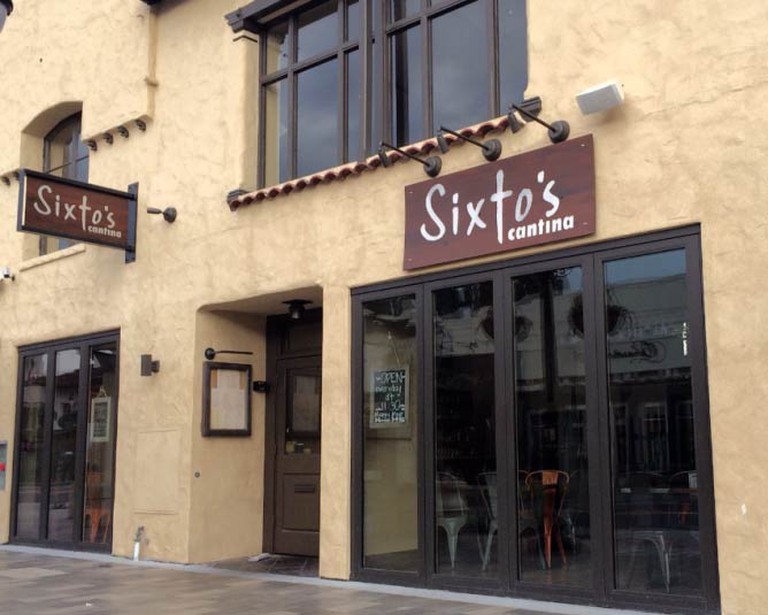 Sixto's Cantina
For the people of Burlingame who need to get their ramen fix, Hanabi Ramen and Japanese Curry is the place to go. This recently opened business only sits 25 people, but their ramen is so delicious that this place is always full of happy patrons. This late-night restaurant has a large range of foods and one of them is chicken karaage. This dish, which is comparable to the Japanese version of fried chicken, is soft on the inside and perfectly crispy on the outside. The miso ramen is filled with well-seasoned broth and soft noodles that come with two slices of pork, corn and fried onions. Customers are able to choose the type of broth and meat included in the savory dish. Hanabi is the ultimate place to eat ramen and is perfect for folks who are new to ramen.

Bar, Restaurant, Mexican, $$$
Facebook
Email
Twitter
Pinterest
Copy link
Share
Map View
Due to lack of Mexican food places in Burlingame, a family decided to change this and start a Mexican restaurant called Sixto’s Cantina. This restaurant serves Mexican food with a twist by including ingredients uncommon to the cuisine such as kale. The eclectic restaurant has high ceilings, a fireplace and even a community table where customers can eat family-style. Before the meal is started, servers bring freshly fried nacho chips with a side of salsa. This complimentary appetizer already makes people salivate before the meal has even begun. Another popular appetizer is the Queso Fundido Dip, a cheesy dip which comes in two sizes, and is enough to satisfy a whole table. The melted cheese is mixed with spicy chorizo, onions and mushrooms and will leave everyone wanting more. Locals are obsessed with Mexican-style short ribs that are perfectly seasoned to enhance smoky flavor. Customers are allowed to pick what sides come alongside with meals and one of the most interesting choices is cactus, also known as nopales. The soft cactus matches and adds to the food profile of most dishes. The owners of the store designed the menu to be family-style so customers can build tacos with the corn tortillas that accompany the entrees. Not only is this place perfect for families during the day, but at night it transforms and is slowly becoming one of the coolest places in Burlingame to dine for dinner. The dim lighting, full bar and music set a vibe that people could trick people into thinking they were dining in San Francisco.

On most lazy Sundays, people tend to crave something sweet to polish off a fantastic meal. Preston’s on Broadway is the favorite for most locals because the ice cream and candy are unbelievable quality for low prices. The coffee ice cream is smooth and the perfect touch of sweet. Preston’s is also known for their candy. They proudly invite people to watch how the candy is made. This dessert place produces fudge that melts in the mouth and creates joy all around. Some also enjoy the frozen fudge-covered bananas, called the Banana Royale, to indulge in as an interesting treat. Preston’s family-owned style and presence offers a comfortable and familial atmosphere.

Cafe, Restaurant, American, Tea
Facebook
Email
Twitter
Pinterest
Copy link
Share
Map View
Burlingame offers many places that serve tea, but none of them are like Rue du Thé.This restaurant, tucked away behind several retail stores, serves tea, sandwiches and chocolates. Many locals come here to chat with friends over a cup of tea and won’t be bothered for hours. The exterior of the restaurant looks like a Parisian cafe, while the inside looks like a hip San Francisco venue. Customers will be delighted due to the restaurant offering tea party-like meals. Patrons can snack on small salads and sandwiches that pack a punch while sipping on some tea. The interesting range of teas include Bingo Bango Mango to Peppermint Chamomile tea. Not only does Rue specialize in tea, they also make delicious hot chocolate. Their European hot chocolate is thick and sweet and puts a relaxing end to the day.

Burlingame is a small enough town that folks are always running into people they know. At Alana’s Café, it’s almost guaranteed that the owners know customer names and their usual orders. The open kitchen allows customers to see how the food is being prepared and the extensive menu contains inexpensive items. An option on the menu, called Martha’s Famous Swedish Oatmeal Pancakes, is a local favorite. Although the menu is packed with satisfying treats, Alana’s is known for their quiches that change daily. This is the perfect place that represents the Burlingame easy-going lifestyle.