Three Maps That Will Change the Way you See San Francisco 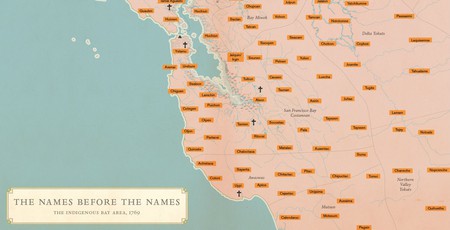 Infinite City: A San Francisco Atlas begins by asking what can be conveyed through a map. Approaching the subject through an artistic lens, Rebecca Solnit plays with the possibilities of what can be illustrated through cartography. From the history of a land to the destruction of an environment, Solnit, with cartographer Ben Pease, curated a collection of maps of San Francisco that takes the art of cartography to its extremes. The following three maps are just a few featured in Infinite City, with the book including more maps and stories that challenge what you think you know about San Francisco. 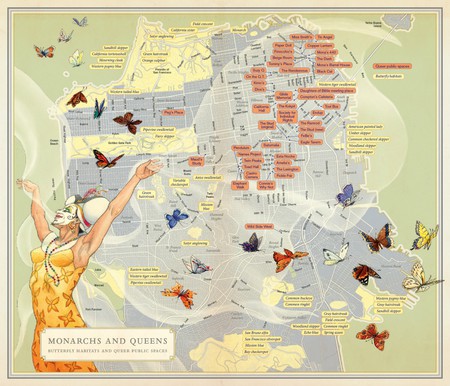 Not one to shy away from a great name, Solnit uses this map to explore the native butterfly population (not all monarch) and various LGBT San Francisco landmarks, including a beautiful illustration of a Sister of Perpetual Indulgence. While the city is known for being a haven for LGBT communities, its unique ecological climate has also allowed for distinct species to develop. Some of the butterflies referenced in this map, such as the mission blue, are only native to the hills around San Francisco.

An essay by Aaron Shurin entitled ‘Full Spectrum’ connects the diversity and color of the LGBT community to that of the native butterflies of San Francisco. “This is a map of tribes, of flirting things and their gathering spots, of wings and of wingspread, of extravagant names and impossible migrations, of will-o’-the-wisps and force of will, a map of fritillaries and fairies,” Shurin pens in the essay. 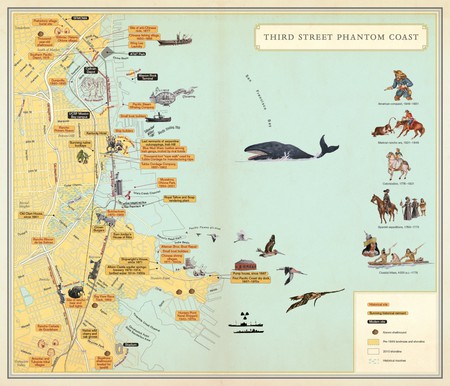 This map tracks something difficult to show through cartography: the progression of time. With iconography by Alison Pebworth, this map illustrates the Bay Area’s original shoreline in 1849 and shows how it has been moved through development over time. Plotting sites of historical importance, including those that were destroyed through modernization, this map reminds viewers of the lost relics of San Francisco.

Tribes of San Francisco: Their Comings and Goings 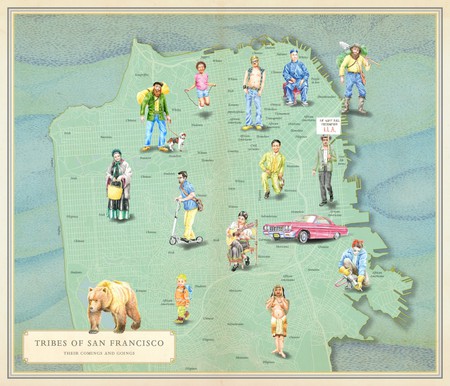 San Francisco is one of the most diverse cities in the United States, something that Jamie Cortez set out to celebrate in this map. “What feels really beautiful is the restlessness of the city,” he shares with Solnit in the accompanying ‘Who Washed Up on These Shores and Who the Tides Took Away.’ “It’s a restless organism: individuals are being moved in and out, processed, but this also happens to whole communities. They arrive, arise, fluctuate, diminish.” Cortez plays homage to these shifting populations by exploring the variety of communities that have chosen to call San Francisco home. From Mexican and Filipino communities to non-profits and homeless communities, Cortez shows the breathing organism of San Francisco.