This Small Town is about to Become a Weed Smoker's Paradise

Young man smoking with a vaporizer, which works by heating a liquid to generate an aerosol, commonly called a "vapor" that the user inhales. From: vaping360.com | © Vaping360 / Flickr

American Green, one of the largest cannabis companies in the United States, has just purchased an old town in Northern California with intentions to turn it into a pot smoker’s paradise.

According to Time, American Green announced this past week that it would be buying all 80 acres of Nipton, an old mill town with a population of less than two dozen residents. The Western-style small town—which consists of a lovingly restored hotel, RV park and coffee shop—will be one of the first places to be transformed by what is being called “the Green Rush.”

“We are excited to lead the charge for a true Green Rush,” David Gwyther, American Green’s president and CEO, said in a statement. “The cannabis revolution that’s going on here in the U.S. has the power to completely revitalize communities in the same way [the Gold Rush] did during the 19th century.”

In the 1990s, it was gold that put Nipton on the map until the mid 1950s when the rush was over, leaving the town virtually deserted. Sandwiched in between Los Angeles and Las Vegas, Nipton often is overlooked; but the promise of marijuana companies investing in the small community may bring tourism back to town. 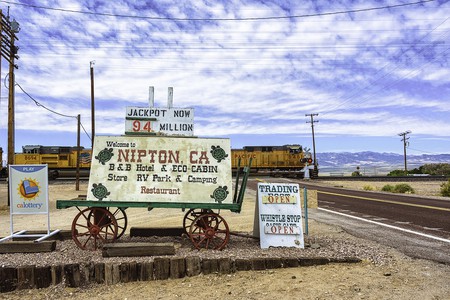 American Green plans to transform Nipton by bringing in pot-related businesses. Currently the company is reaching out to edible manufactures in hopes that they will be open to relocating to the Northern California town to create job opportunities for the locals.

Beyond the hope to turn Nipton into a pot smoker’s dream destination, American Green is also looking for ways to revitalize the community and turn it green in more ways than one.

“We want to increase and modernize the solar collective [in Nipton], which was installed over 10 years ago, as there have been lots of changes in the technology since then, and we want to take advantage of it, possibly increasing the output over time. The output to the town is a great a value, and supports our stated goal of self-sufficiency,” American Green General Manager Stephen Shearin told Fortune. Likewise, the company plans to manage the water from the town’s aquifer for the production of marijuana.