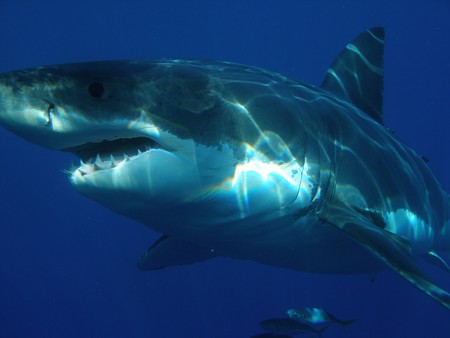 A drone captured the moment on camera when a kayaker, circled by sharks in the water, stayed strangely calm.

Thanks in part to movies like Jaws, most people would not remain calm while great white sharks surround their kayak. But recent aerial footage shows a kayaker in Monterey Bay, California, floating perfectly at ease while several great white sharks circle her in the water.

“I felt at home,” Nicolle Otman told the SFGate. “It’s a pretty humbling and relaxing experience.”

We can’t relate. After filming the kayaker, the video pans to the beach to show how eerily close to land the sharks are swimming. Adult great white sharks can have up to 300 serrated teeth, and they feast on sea lions and seals, which often brings them to shallower waters.

A marine biologist and boat captain for Sanctuary Cruises, Giancarlo Thomae, captured the footage using a drone. Based on the size of the sharks relative to the kayak, they likely measure between 10 and 13 feet (approximately four meters) long.

Seeing so many sharks close to shore isn’t an isolated incident. Thomae and other researchers in the area have noticed an increase in the number of sharks appearing off the coast of Northern California in recent years.

“Four years ago, we would see about 10 sharks, and they were about eight feet [2.4 meters] long,” Thomae told The Tribune. “Now we are seeing about 25 sharks a day, and they are anywhere from 10 to 13 feet.”

Despite the increased sightings of great white sharks, California had just two unprovoked shark attacks in 2017, according to data from the Florida Museum of Natural History’s Shark Attack File. Globally, there were 88 unprovoked attacks, of which only five were fatal.

Researchers credit the increased number of sharks to federal and state protections implemented in the ’90s to help protect both great white sharks as well as the mammals they eat. While increased numbers may seem mildly terrifying to the average observer, they are a positive sign that the population is rebounding.