This is the Story Behind California's State Flag 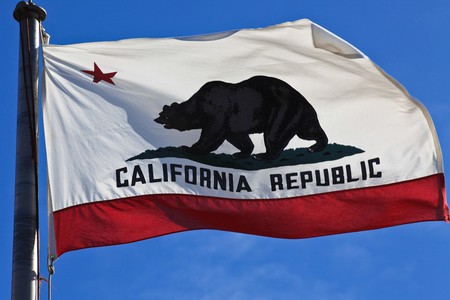 Stop at any souvenir shop on the Venice Boardwalk or Hollywood Boulevard and someone will try to sell you a shirt, cap, or mug with a California state flag print. It’s a recognizable flag: a grizzly bear walks on a patch of grass towards a red, five-pointed star, while a matching red stripe runs along the bottom. “California Republic,” it reads. Though formally adopted in 1911 as the official state flag, its origins date back to a short-lived revolt in 1846.

Back in the mid-1800s, the burgeoning United States and Mexico had a tense relationship, largely over who would control what land. In 1836, Texas became independent of Mexico, but as of 1844, had not been annexed into the United States. In 1844, James K. Polk won the U.S. presidency and pushed for annexation.

Polk and many of his contemporaries believed in the Manifest Destiny; that is, that the United States should continue to spread westward to the Pacific Ocean.

As the United States’ aspirations began to conflict with the fact that Mexico already held much of what is now the American West, skirmishes began to break out between the two nations near their respective borders. This led to the two-year Mexican-American War, which came to an end in 1848 with the signing of the Treaty of Guadalupe Hidalgo. The agreement forced Mexico to sell quite a bit of land north of the river to the U.S., including what is now California.

In June of 1846, in the midst of the war, a group of American settlers living in Mexican-controlled Northern California decided to declare California an independent republic. The details of this revolt vary largely from account to account. Some see the settlers as celebrated rebels, while others view them as complete monsters.

U.S. Captain John C. Fremont and a group of his men came to Sutter’s Fort near what is now California state capital Sacramento, purportedly for research. He encouraged the disgruntled American settlers in the area, who feared they might be evicted, to stand up against Mexican control. In June, a group of rowdy settlers stole several Mexican horses. Then, settlers Ezekiel Merritt and William Ide stormed the Mexican settlement of Sonoma with a small group of 25 or so men. Though Mexican General Mariano Vallejo was said to have greeted them amicably, offering them brandy, they still took Vallejo and his family prisoner, sending them to Sutter’s Fort. 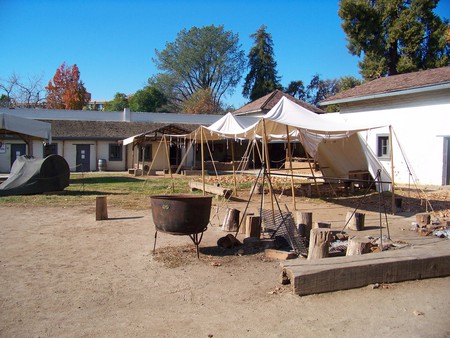 Ide and Merritt had decided that California should be its own republic and thus, needed its own flag. Another settler, William Todd, agreed to draw it.

According to William J. Trinkle, an attorney and operator of the virtual Bear Flag Museum, the flag was drawn sometime between June 14 and June 17, 1846. It featured the stripe, star, and the bear, but it’s not clear why. Most of the Bear Flaggers died in the 1850s without explaining the flag, Trinkle said.

The star may relate to the Texan flag and its lone star. Some speculate the bear stood for courage and fierceness, while other sources report it was to reflect the many bears seen on the territory. According to an article written by politician John Bidwell in 1891, several Native Californians thought the crude drawing actually looked more like a pig than a bear. 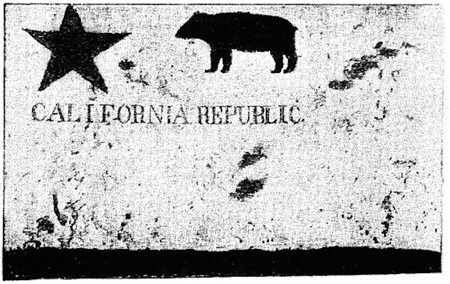 The Bear Flag Revolt lasted less than a month. Though the Bear Flaggers had raised their flag in Sonoma, the U.S. Navy showed up on July 9 and raised their own flag. In 1950, California would become part of the United States. No independent republic was to be had.

After the Bear Flag Revolt

When the Bear Flag was lowered, it was given to John Elliott Montgomery, the teenage son of U.S. Navy Commander John B. Montgomery. Trinkle points to letters the younger Montgomery wrote to his mother, in which he not only described the flag, but drew her a picture of it.

In one such letter, the teen wrote, “Their Flag consisted of a Star Union with a Grizzly bear in the center looking up at the star and under the Bear the words ‘Republic of California’ on the lower border there was a red Stripe of Flannel the whole was composed of a piece of white cotton & Blackberry juice there being no paint in the country. I have the original & only Flag of the California Republic in my possession & esteem it quite a prize.” 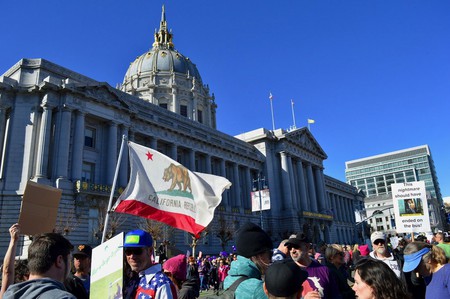 Montgomery and his brother both disappeared in 1846 while headed to Sutter’s Fort, their ultimate fate unknown. From that point, the flag made its way around California Navy officials and politicians until reaching the Society of California in 1855. There, the San Francisco earthquake of 1906 and the fires that followed the disaster destroyed both the original flag and another copy of it. Still, groups including the Native Sons of the Golden West continued to use the Bear Flag imagery and pushed for it to become the state flag. In 1911, California Governor Hiram Johnson signed State Senate Bill 219, which established the Bear Flag as the official flag of California.

The questionable legacy of the Bear Flag 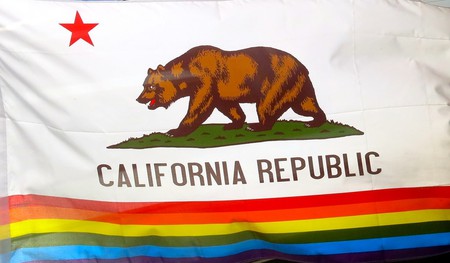 The flag is not without its controversy. Writer Alex Abella suggested California dump the flag in a 2015 op-ed that ran in The Los Angeles Times. The Bear Flaggers are described unfavorably by many historians, frequently referred to as drunks, thieves, slave owners, and—in the case of Bear Flagger Second Lt. Sam Kelsey—a “genocidal maniac who killed hundreds of Pomo Indians in Clear Lake,” Abella wrote. Reports indicate Bear Flaggers were needlessly hostile to indigenous people, many of whom were later killed in subsequent conflicts. Additionally, no one’s seen a California grizzly in the wild since 1922, though you might spot one at the San Francisco Zoo.

Still, Trinkle says he’s noticed a surge in popularity over the last 15 years. It’s on clothing and merchandise, and he’s seen it employed in political cartoons.