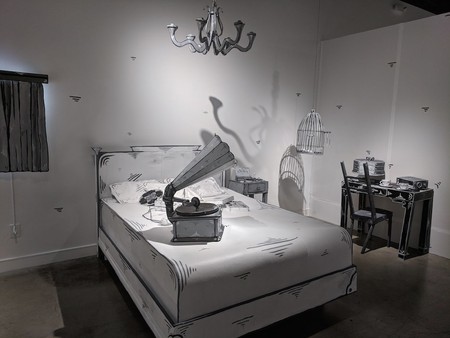 Art duo Dosshaus’ Paper-Thin Hotel feels like walking into a pulp comic full of antiheroes, complicated criminals, heists, and hijinks. In this monochrome flophouse created entirely out of painted cardboard, guests will find memorabilia from absent guests that spins a vivid narrative.

Visitors are free to walk through the exhibit, and would be wise to pay attention to the small details. Dosshaus didn’t just make big pieces like beds and chairs out of cardboard; there are dozens upon dozens of small items—keys, letters, toiletries—strewn about the space, too. Each and every one of them has been meticulously painted in shades of gray, giving them the appearance of 3-D illustrations plucked from a comic book and transported to our world. Stiff, cardboard curtains are backlit, providing the illusion of light streaming in from a non-existent window. Mirrors contain actual glass, allowing the viewer to see themselves fully immersed in Dosshaus’ hotel. 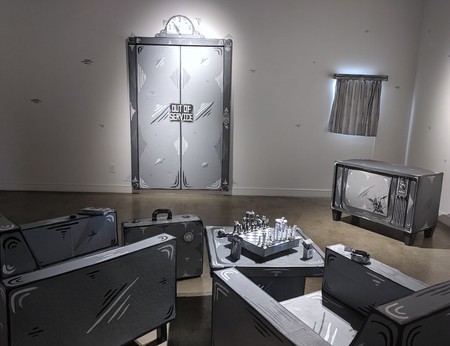 The details of the exhibit offer insight into the characters and how they live, even though they themselves are not present. The elevator is out of service, the TV is broken, and a chess set sits untouched in the lounge. A barely eaten sandwich lies on the manager’s desk next to an F. Scott Fitzgerald novel, while a bottle of hooch is hidden in a drawer and adult magazine strewn on the chair. A sign at the entrance, when paid attention to, reads “vagrancy” as opposed to “vacancy.”

Room 101 is meant to be the honeymoon suite, according to a release from the gallery. Yet these lovebirds seem like they might be on the lam. A suitcase full of cold, hard cash lies next to a prop gun on a pale comforter, while two Chinese takeout boxes sit empty on a nightstand. “You will be rewarded for your efforts,” the fortune from an abandoned cookie reads.

In another room, a mostly unfinished cake sits on a desk next to an empty birdcage, the door hanging open ominously. Prescription pill bottles, syringes, and a spoon indicate an addiction is also housed in this suite. A musician occupies a third room, a guitar leaning against a dresser. 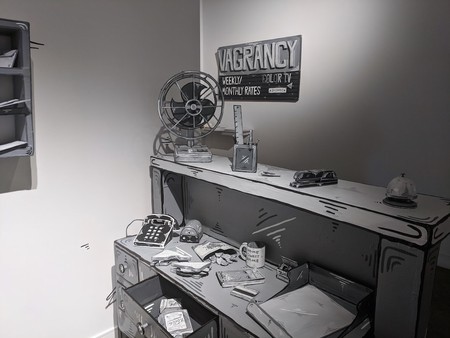 Though the title of the exhibit is quite literal in that the walls separating each room are actually made of cardboard, “Paper-Thin Hotel” is also the name of a Leonard Cohen song. Similarly voyeuristic, Cohen sings about overhearing a woman having sex with an unknown man in an adjacent hotel room.

Paper-Thin Hotel will be on display through May 5.