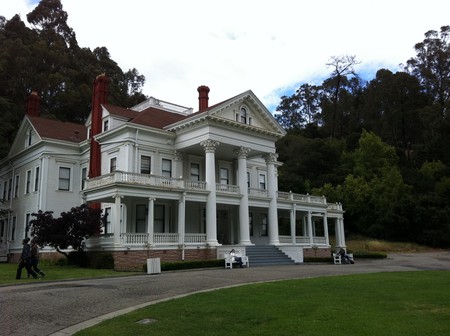 The Dunsmuir House and Gardens comprise a 50-acre estate in Oakland, CA, primarily used today as a scenic location for weddings, receptions and historical reenactments. Yet this 117-year-old house hides a tragic past. Get to know this historic estate, from its harrowing beginnings to what it has to offer today.

Alexander Dunsmuir, son of a wealthy coal tycoon, moved to the Bay Area in 1878. While living there, he oversaw the family estate, and soon became engaged to a woman named Josephine. In 1899, he built the Dunsmuir house, an elegant mansion that he intended to give to his wife as a wedding gift. The couple wed happily, but their honeymoon in New York was tragically cut short when Dunsmuir fell ill and then passed away. Following the death of her husband, the widowed Josephine returned to live in the house for a short time before she herself died in 1901.

Calling all the shots as usual 🙄 #gatsbysummerafternoon #artdeco #LP

A few years later, I.W. Hellman Jr. bought the estate, and even after his death in the 1920s it stayed in the Hellman family throughout the 1950s. The family expanded the estate, developed the landscape, and even added a swimming pool during their time there. Finally, in the 1960s, the estate was purchased by the City of Oakland, and the mansion has since been declared a National Historic Site and a Historic Landmark.

Thanks to architect John McLaren, known his work as the landscape architect of Golden Gate Park, the Dunsmuir gardens boast a wide variety of trees, like Camperdown Elms, Bunya-Bunya and Hornbeam trees. The estate is also filled with a golf course, croquet and tennis courts, a swimming pool and bathhouse, a glass conservatory, an aviary, a garden maze and a Japanese garden. Visitors have been known to spot deer, wild turkeys and waterfowl in their explorations of the grounds. The mansion itself is designed in Neoclassical Revival style, featuring 37 rooms, ten fireplaces, a dome, wood paneling, and more. All of these features have made the estate an iconic location featured in several movies and television shows. 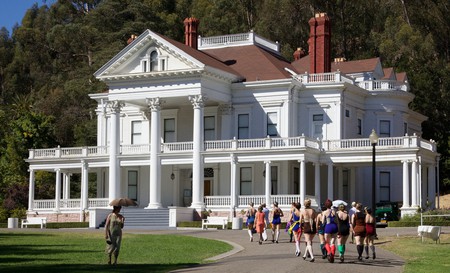 The full grounds are open to the public Tuesdays through Fridays from 11am to 4pm. If you visit on a Wednesday or the first Sunday of the month during the months of April through September, you can enjoy a docent-led tour of the mansion and the expansive grounds for $5. The property is also available to be rented out for events like weddings, corporate retreats, auctions, and more.