The Food Robots Making Your Meals in California 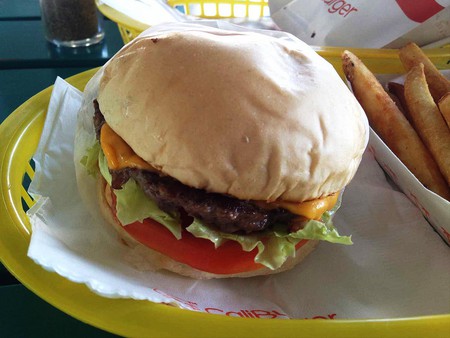 Though the old adage would have you believe that all meals are better when prepared with the secret ingredient known as love, several fast food and fast-casual restaurants are incorporating robots into daily food prep routines. And while the robots can’t love you (yet), proponents of a robotic workforce say they can add efficiency and consistency to the job while minimizing danger for human employees.

Zume, located in the Bay Area, makes pizza using a combination of human and robot workers. As explained in a step-by-step TechCrunch video, humans put the dough on the line, and a conveyor belt moves the dough to a robot that squirts a precise amount of sauce on the pie. A second robot then spreads the sauce around evenly. A human has 22 seconds to add cheese and toppings before the next robot puts the pizza into an oven. After the pizza has finished baking, a person places it into a custom box made from compostable sugarcane fiber. A human who uses GPS to optimize their delivery route, resulting in an average delivery time of 22 minutes from order to the customer’s door, delivers the pizza. Orders can easily be placed by phone, by using Zume’s website or a mobile app. Zume also has a delivery truck that contains 56 small ovens, meaning that pizzas can also be baked while en route to the customers who ordered them. In a statement, Zume co-founder Alex Garden said that “by eliminating dwell-time, we can make pizza with locally sourced, chemical-free ingredients so that customers don’t have to compromise quality for convenience.”

Then there’s Flippy. Developed by Miso Robotics in Pasadena, Flippy is already hard at work at Pasadena’s CaliBurger, cooking the burgers. CaliBurger intends to implement Flippy in as many as 50 of their franchises by the end of 2019, according to a release.

“Though we are starting with the relatively ‘simple’ task of cooking burgers, our proprietary AI software allows our kitchen assistants to be adaptable and therefore can be trained to help with almost any dull, dirty or dangerous task in a commercial kitchen—whether it’s frying chicken, cutting vegetables or final plating,” David Zito, CEO of Miso Robotics said in a statement.

Cafe X in San Francisco is a completely human-free, cash-free way to get a coffee or espresso drink. Customers order at a kiosk and then wait for a robotic arm to finish their drink. The Cafe X robot can make up to 120 drinks in an hour, and it even waves goodbye to its customers.

I felt so San Francisco this weekend thanks to @cafexapp pic.twitter.com/wuLbi3Q9AL

Meanwhile, Eatsa offers healthy grain bowls at their several California locations, but customers won’t necessarily interact with another human. Eatsa operates as a modern-day Automat and feels sort of like when Star Trek characters order a meal from the Enterprise’s replicators. Customers order using one of the several iPads, and then they pick up their bowl from a window that displays the customer’s name when finished. The clear LCD screen turns opaque while the order, created by humans behind the scenes, is placed in the appropriate chamber; this means customers never actually see human employees, though they are vital to the process. Similarly, Barrel Republic—with locations in San Diego, Oceanside, and Carlsbad—allows customers to pour their own beers from various taps around the pub by giving them a wristband that activates the taps and maintains their tab. However, cicerones are still on hand to help customers find the right beer for their palate. 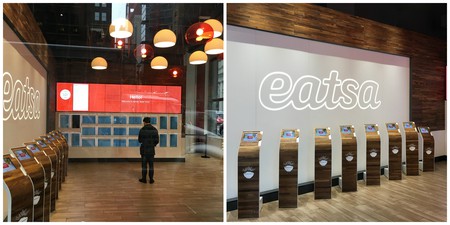 An Eatsa outpost in Manhattan | ©oinonio/Flickr

While it might seem more efficient to have a robot take an order or carry out the potentially unsafe slicing and dicing in a kitchen, some people worry that robots will replace human workers and increase unemployment—especially among those who rely on low-skill jobs. Jobcase CEO Fred Goff told The Motley Fool that these worries have existed since the Industrial Revolution and managing the transitions are about being open to change. “The challenge for workers is to take control of their own work-life and navigate the positive impacts (easier access to education/training, new job creation, etc.) so that they aren’t overwhelmed by the negative impacts of technological progress,” he said.