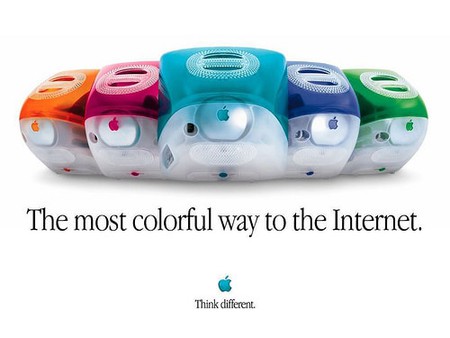 The iMac G3 and the 'Think Different' advertising campaign | © Apple

Ken Segall, former creative director of Apple’s ad agency and author of New York Times bestseller Insanely Simple, tells Culture Trip about Apple’s culture of essentialism, creating the ‘Think Different’ campaign, how the iMac was almost called the MacMan and what it was like working side by side with Steve Jobs.

Culture Trip: What made Apple so special and successful?
Ken Segall: The culture of simplicity. Steve Jobs had a love for simplicity that was at the root of the way he reacted to everything, whether it was the physical product design, the software design, the advertising or the retail stores. He just loved simpler things and thought that customers responded to that. He set that example so strongly that internally within Apple, simplicity became a huge part of the culture.

Apple was started in a garage by three people, and I don’t think Steve ever lost his love of that small, entrepreneurial culture. Even as Apple became a huge company, he didn’t want it to be consumed by the behaviours common in big companies. He referred to Apple as “the world’s largest start-up.”

The first time anyone would behave like they worked at a big company, Steve would swat them down. He liked to keep things informal. In our meetings, no formal presentations were allowed. If you had something you wanted to visualise conceptually, you could go up to the whiteboard and draw it, but he didn’t want people coming in with slick packages – he wanted people to talk about the essence of the idea itself.

CT: Tell us more about what it was like to work with Jobs.
KS: In all the time I worked with Steve, which amounts to 12 years overall, he only beat me up twice. Which is pretty good, compared to many. One of the times he did will always remain very clear in my mind, because it tells you a lot about his standards. When we first introduced the iMac, eight months into Steve’s return to Apple in 1998, we were going to put a multi-page ad insert in the news weeklies.

I’d sent Steve the final proof for the insert and was sitting in my office in LA and got a call from him while he was driving. He started out calm as he would often do, and he said: “There was a photo in there, and the keyboard edge has the wrong color blue.”

He started screaming at the top of his lungs that this wrong color blue was going to destroy the entire launch. It was going to be a disaster. And I was responsible. I said: “We can still change it and I will get to the bottom of this.” Even though it was over the phone, I have never heard someone scream that loud. He was as angry as a human being could possibly get. And the difference in the blues was imperceptible. No one would ever noticed. But he did.

A few weeks later, when everything launched, I got a phone call from Steve. The quiet Steve. And he said: “I just wanted you to know that I got the insert in my office today and it looked fantastic. Really beautiful. And I was driving home and the billboards were up and they’re amazing. And I get home, and I turn on the TV, and our commercial comes on. And it’s the greatest launch, not just in the history of Apple, but in the history of computers.”

He was so excited and he said: “I just want to thank you and I want you to thank everyone who was involved.” And in my head I was just thinking of the vicious, screaming man that I saw three weeks before. But that was sort of the way he was. Every single detail had to be perfect.

He could be a very hard person to work with, but he had that drive, and this love of art and design and simplicity, and a real desire to do something profound.

CT: How did Apple transform tech products, then considered niche or nerdy, into luxury lifestyle products with a cult-like following?
KS: I think it started with the iMac. If you look back at the original iMac ad, it was all about appealing to what a human being would want out of technology.

That’s what made him so difficult. He didn’t want to hear the excuses. In the first ‘Think Different’ commercial, he talks about putting the human race forward. He really emphasized the human part of technology, and that’s what’s always set Apple apart.

All of the new products that came along, and the ones that really changed Apple, like iPod and iPhone, were not new machines. There were plenty of them out there at the time, but they weren’t very human, they weren’t easily loved. And that became the theme – to create products people could fall in love with. That’s a part of Apple’s DNA.

Before Steve came back to Apple, they had 20-some-odd products – Newtons, printers, scanners, cameras – none of which stood out in their category. I think the biggest decision Steve ever made for Apple, that set it on its modern course, is that he killed all of those products, more than 20, the day he introduced the iMac.

He said: “We’re only going to make world-leading products in four categories: the home and pro version of a desktop and laptop.” The home version of a laptop didn’t even exist yet, but Apple came up with the idea for the iBook in the next few months.

It enabled Apple to lavish all their research and development [R&D] and advertising money on four products alone, allowing them to create world-leading products and design that would allow them to charge more, because people would feel like they were getting more. And that’s the core of Apple’s whole business model – people will pay more if they think they’re getting more.

CT: What inspired the ‘Think Different’ campaign?
KS: A colleague of mine, Craig Tanimoto, created the slogan ‘Think Different’ because it captured what Apple had always been about, back to the beginning in the garage, which was about finding a new and better way to use technology for humanity.

The idea was that if you tell people who admire, then that says something about you as a person. So Apple was saying: “We admire Einstein and Alfred Hitchcock and artists and architects and dancers, and these are the kinds of people we want to make technology for. People who really think different, and change the world for the better.”

CT: You invented the ‘i’ before products, starting with the iMac – how did that come into being?
KS: Steve originally had a name for the iMac that he really liked, which was MacMan.

We hated hearing it. The computer had a big handle on the top but wasn’t really portable, so we didn’t want it to sound like you could carry it around. It looked fun and frivolous but was a serious computer, so you don’t want it to sound like a game. MacMan sounds like Pac-Man, and Pac-Man is reminiscent of Walkman, which was the world’s most portable device. So why would you want to call it MacMan?

But Steve really liked it, and thought it sounded like a consumer product, something Sony would do. He didn’t have any plans at that time for iPods or iPhones, but he did like the idea of not being stuck as a computer company, and he thought MacMan had that quality. We thought: “Oh my god, we can definitely do better than that.”

The concept of the computer was that it made getting on the internet easier. Very quickly I thought, ‘i’ for internet, Mac for Macintosh. But Steve hated it, as he hated the other four ideas we had for him.

We had to come back the next week with new ideas, and he hated those too. But I pulled the iMac out of the bag again. And this time he said: “I don’t hate it this week, but I still don’t like it.”

Two days later, I found out that Steve had the name put on a model of the computer, and was showing it around and was warming up to it, and it just happened. There was no great moment of glory afterwards. That was just the name.